The Other Bullet (1930) by Nancy Barr Mavity

Nancy Barr Mavity was an American biographer, reviewer and journalist, who wrote for such publications as The San Francisco Chronicle, Oakland Tribune and Sunset Magazine, but between 1929 and 1933 she produced six detective novels about her series-character, Peter Piper – an ace reporter for the Herald. A final, non-series, mystery appeared in 1937. 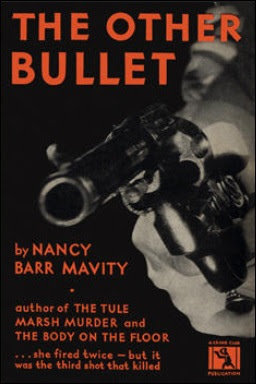 I was recently reminded that one of her detective novels, The Other Bullet (1930), was listed by Robert Adey in Locked Room Murders (1991) and the book happened to be on my shelves. I left it there to collect dust after my disappointing 2012 read of Mavity's The Case of the Silver Sandals (1930), but that was nearly six years ago and the time had come to give her work a second look. However, Adey had incorrectly labeled this book as an impossible crime story. So the string of non-impossible crime reviews continues for now.

The Other Bullet is set in the Californian village of Hangtown in the Sierra foothills where Peter and Barbara Piper are spending their holiday panning an exhausted stream for its last crumbs of gold, but a "tragedy that had crushed in upon them" put a halt to their holiday fun – beginning when an out-of-breath housekeeper, Mrs. Coak, announces that a man had been shot at the ranch-house office. Don Mortison had been hired by Max Everett, a construction engineer, to manage the ranch when he's away to work on an irrigation dam project. This meant he was away from home most of the time and left his urban wife, Aline, behind in Hangtown like an Englishman in the jungle.

So, naturally, Aline felt attracted to the well-read, equally out-of-place ranch-hand and they got involved with one another, but a witness claims he saw Aline shooting her loves. She does not even deny that she killed Mortison. However, Aline claims she only shot Mortison once. Not twice.

On a side-note, the aspect that earned The Other Bullet its spot in Adey's Locked Room Murders is the early onset of rigor mortis shortly after Mortison was shot. So I expected trickery where the time of death was concerned or perhaps even something along the lines of the rapidly-decaying body from Hake Talbot's The Hangman's Handyman (1942), but the problem of early rigor mortis turned out to have simple, natural explanation – which came to light during the postmortem examination. I've no idea why Adey included it in Locked Room Murders.

Anyway, there are a number of potential suspects and one of them was criminally underused. Hermann Schnitzler is a retired farmer from Pennsylvania and he's convinced that Mortison had hexed him, preventing his crops from growing, which is a superstition that was once rife in Pennsylvania and was used in Alexander William's The Hex Murder (1935).

Aline Everett is put on trial for Mortison's murder and the courtroom scenes constitute the best parts of the story. One scene in particular was very memorable. As an outsider, Aline was not very popular with the people of Hangtown and she came to court dressed like "an advertisement out of Vanity Fair" flourishing a "cigarette-holder at the jury the minute court adjourned" – an action that was akin to "a red rag to a bull." So her own lawyer felt compelled to wrench the cigarette-holder from her hand and "grind it under his heel on the courtroom floor." A great scene! Sadly, the story went rapidly down hill after Aline was acquitted of murdering Mortison.

The first half is undoubtedly the best part of the book, but there were also hints in this portion that the plotting was as shoddy as the police work.

Mortison had two bullet-holes in him: a fatal shot in his neck and a bullet in his lung, which was fired after he had already been shot and killed. This should have come to light during the postmortem examination and should have prevented Aline from going to trial. This was shoddy plotting, to say the least.

The Other Bullet is best described as a tale of two bullets with the victim as the only link between the two stories. So, once the trial is over, Piper tries to figure out who really shot Mortison and follows a trail of clues that includes a mutilated photograph, a signet ring and an 11-year-old murder case. The plot of the second story struck me as an imitation of some of the Sherlock Holmes novels (e.g. The Sign of Four, 1890), but an imitation that was as pale and poorly done as Joseph Bowen's The Man Without a Head (1933) – only difference between the two is that Mavity was better writer than Bowen. You should not expect too much from the eventual solution, which was hardly fair and the only surprise is that neither of shooters turned out to be legally murderers.

My impression is that Mavity constantly wanted two different things at the same time, but failed to deliver on any of them. The story of the first bullet had potential, but ended with a disappointing, anti-climatic acquittal and the second bullet-story simply harked back to the works of Conan Doyle. I think this part was not half as interesting as the first leg of the story. Another example is the forensic aspect of the plot. Mavity made a point of ballistics and the early onset of rigor mortis, but completely ignored that an autopsy would have revealed that Aline's bullet was not the fatal one.

If you look to whom Mavity dedicated the book (Edward Oscar Heinrich, scientific crime analysis), I suspect she willfully ignored the postmortem gunshot wound, because she wanted to write those courtroom scenes.

So, as said, my impression of The Other Bullet is that Mavity wanted to have her cake and eat it to. Unfortunately, this resulted in a mess of a detective story that began promising, but ended up frustrating and annoying me to no end. I can't really recommend this book to anyone. I'll probably abandon this series altogether unless someone can give me a recommendation with an iron-clad guarantee that the plot can pass the muster.

Well, I try to dig up something good for my next post to make up for this. Probably a good, old-fashioned locked room mystery. So stay tuned!
Geplaatst door TomCat on 7/27/2018