"Who can be shown to be the one person, and the only one, with direct access to the toys of both withcraft and murder?"
- Dr. Gideon Fell (John Dickson Carr's The Crooked Hinge, 1938)

I wrote several years ago how the traditional detective story is in the middle of a renaissance and this era began as a slow drip of reissues of long-forgotten, out-of-print mystery novels during the 2000s that became today's flood of truly rare titles – making it all but impossible to keep up with all the releases. Ah, luxury problems!

There is one particular title, recently reissued, that caught my eye, because its emergence out of the dark abyss of literary oblivion might have set a new speed record for comebacks. 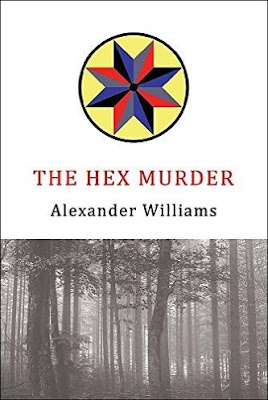 Back in October of 2016, John Norris of Pretty Sinister Books posted a glowing review of The Hex Murder (1935). The book was written by Alexander Williams, using the nom-de-plume of "Forrester Hazard," which Norris described as a remarkable modern, fast paced, well told and gripping story steeped in the old religions and superstitions brought to the Americas by the German settlers known as the Pennsylvania Dutch – labeling the book as, what he called, "country noir." Norris ended the review with a lamentation that there were hardly any copies for "anyone to get their hands on to enjoy." Well, that situation persisted for only four more months!

In February of this year, Coachwhip brought The Hex Murder back into circulation and this brand new edition is introduced by one of the usual suspects, Curt Evans. According to the introduction, Williams wrote three more detective novels, The Jinx Theatre Murder (1933), Death Over Newark (1933) and Murder in the W.P.A. (1937), which are all scheduled to be reprinted by Coachwhip. Some of those titles are really tantalizing, but sincerely hope they've a stronger plot than the subject of today's blog-post.

Yes, I fear my review of the book is going to be a cold drizzle on Evans and Norris' infectious enthusiasm. So you've been warned!

You can divide the plot of the story into two separate parts: the first half that takes place in bohemian Greenwich Village, New York, where a ghastly murder is discovered and an innocent man is arrested. And the second half that takes the investigation to the backwoods of Amish country, Pennsylvania, where the roots of the crime are buried. But let's begin at the beginning.

The Hex Murder opens with Patrolman James Bates pounding the pavement on his beat when he hears someone yelling, "Help! Help! Police!" A man clad in pajamas, "splotched and spattered with blood," tells him there's a woman bleeding to death, but when Bates enters the apartment he discovers the body of a woman with her throat viciously cut – a "terrible wound" that had nearly severed the head from the body. The name of the woman is Marguerite Scholl and she's in a modern relationship with the man in the pajamas, Bob Crocker, who's a struggling artist and the small apartment they occupied is a known source of trouble in the neighborhood. They regularly host loud, late-night drinking parties. On the night of the murder was no different.

However, Crocker's memory is very foggy and since his hands are caked with blood (basically covered in the stuff) they arrest him on suspicion of murder. The police end of the case, detailed in the opening chapters, reads like a hardboiled police procedural. Crocker is on the receiving end of long, exhaustive (verbal) third degree and has a desk lamp, "a burning horror," shown full in his face during the many hours of questioning. Even the policemen talk and quip like you expect from a stereotypical, 1930s homicide cop ("Oh, she got that slit throat from a cough, did she?"). Crocker would have been headed to the chair if it weren't for the interference of a young newshound.

Peter Adams of the New York City News Association is the first reporter to nose around the scene of the crime and believes Crocker to be innocent, but the District Attorney believes the evidence is more than sufficient "to force the jury to bring in a verdict of murder in the first degree" and some of the evidence was found by Adams – i.e. a bloody razor blade. So the reporter takes a leave of absence to follow up on some clues that point to Erwinna, Pennsylvania. The small home town of the victim. 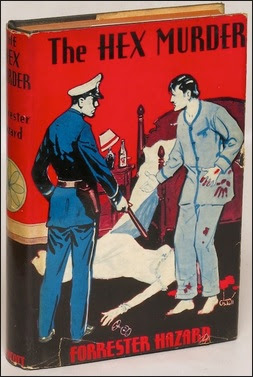 Admittedly, the second half of the book seems to have broken new ground in the genre. As Norris said in his review (and he should know), The Hex Murder may be "the first cultural detective novel of its kind" with a plot that relies "so heavily on Amish life, culture and folklore." I agree that this second half of the story constitutes the best part of the book.

Adams is accompanied to this part of the United States by a friend of Crocker, Miss Houston King, who wants to help clear his name and they come across a host of unusual characters in the rural community. First of all, there is Marguerite's dying father and the old man appears to have been very upset that his daughter defied his wish, which would see her married off to their neighbor, Conrad Reifmayer, who's a religious fanatic and powwow man – reputedly hexed his neighbors. She had a much more forgiving mother and the letters she had been secretly sending to her daughter was one of the clues that lead Adams to their doorstep. The household also has a son, Henry Kruger, a "tall, ungainly youth" who, as it turns out, knows more about what took place in his home than his other relatives.

Adams and King receive help from Sheriff John Reed and Doctor Schneider. They provide a lot of background information about the community and their customs, religion and superstitions.

So that alone makes this part of the book an interesting read and culminates with the destruction of the murderer's cover during a public stunt involving an apparently stupid dog herding a flock of sheep. Norris rightfully called this scene one of the "better and more original denouement in a Golden Age detective novel." However, the gruesome details of the murder, the hexing business, the rural setting, the cultural snippets and some admittedly well written scenes are only the dressing on the bare bones of the plot, which not only failed to impress me in any way, but also left me completely disappointed – because the book had so much going for itself. You can not really deduce the identity (or motive) of the murderer based on the given information, but you can, instinctively, guess who did the throat-cutting after while. But that's hardly a satisfying way to reach a conclusion. Not to mention that said conclusion was really sordid and underwhelming.

Well, I guess I should have expected a sordid, simplistic explanation for a novel described as "country noir," but really hoped for something grander. Particularly since the entire book was pretty much structured like a slightly hardboiled detective novel.

So, The Hex Murder is definitely an interesting read, as far as its background and cultural elements are concerned, but the plot missed that final knock-out punch to elevate it to the status of a genuinely great and classical detective novel. And that's a real pity. However, you should keep in mind that my opinion on this one appears to be a minority one. If you were initially intrigued, you should allow me to keep you from acquiring a copy.

Well, now that I'm done raining on this effort of bringing a truly obscure title back into print, I'll promise to get my hands on that delicious sounding impossible crime novel Coachwhip recently reissued. So stay tuned!
Geplaatst door TomCat on 4/07/2017