Only Death is Immortal

"There is nothing new under the sun. It has all been done before."

During the previous century, the detective genre became a holiday residence, or even a second home, to a number of science-fiction writers that included Isaac Asimov, Anthony Boucher, Fredric Brown, John Russell Fearn and John Sladek. One thing they have in common, as mystery novelists, is that they tended to write plot-oriented detective stories with a predilection for impossible crimes. So imagine my initial enthusiasm when discovering a modern author who appeared to have continued this tradition. 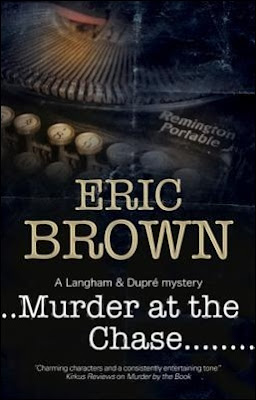 Eric Brown is a British science-fiction author, whose career took off in the late eighties, but several years ago Brown tried his hands at a detective novel and wrote Murder by the Book (2013), which is set in the mid-1950s and introduced his series-characters, Donald Langham and Maria Dupré – who reminded me of Richard Forrest's Lyon and Bea Wentworth. The second book in the series, Murder at the Chase (2014), was billed as a "classic locked room conundrum," but this claim borders on false advertisement. And what remained was not all that good either.

Murder at the Chase began promising enough and the premise of the book could have easily come from one of the better Jonathan Creek episodes, but the plot never delivered on the promises it made to the reader in the opening chapters.

The book takes place during the summer of 1955 and begins at a garden party given by a London publishing agent, Charles Elder, who has Langham as one of his clients. Langham writes violent "thrillers set in the underworld" and at the party he's introduced to the son of an old acquaintance, Edward Endicott, who's known for his "tough-guy no-nonsense stories," but the shy Alasdair is a complete contrast to his old man. And from him they learn Endicott is currently obsessing over a reputedly immortal Satanist.

Vivian Stafford was a Victorian-era Satanist, "a cohort of Crowley," who was born in 1835, but the present-day Stafford claims to be the same Stafford as the one from Victorian times, which would make him around a 120-years-old – a claim supported by an old photograph depicting a dead ringer for the present-day Stafford. He also demonstrated his occult powers that allowed him to summon the dead. During two gatherings, called "Evening of the Occult," he summoned several ghostly apparitions. Stafford's demonstrations were enough to convince old Endicott and he decided to write about a book about him, but Alasdair is afraid this plan may have lead to his father's seemingly impossible disappearance from his study. So he called the ex-detective he met at the garden party for assistance.

The door to the study, "as solid as rock," was locked from the inside and the French windows were latched, but Langham solved this extremely simplistic, incidental and very disappointing locked room mystery upon his first inspection of the room. What really annoyed me is not only how the impossibility is completely identical to minor locked room problems from such detective stories as Anthony Berkeley's The Layton Court Mystery (1925) and Agatha Christie's "Dead Man's Mirror," collected in Murder in the Mews (1937), but also that it was obviously tossed in to market the book as a locked room conundrum – because the plot would have worked just as well if Endicott had vanished from an unlocked room. Endicott and his papers simply had to disappear. This locked room angle added nothing to the story except disappointment.

So, merely five chapters into the book and my initial enthusiasm was already on life-support, but decided to trudge on. After all, there were other plot-threads that could still deliver in the end, right? Well, I was very naive and really should learn to bail on these modern monstrosities. If they suck in the beginning, they suck in the end. They never, ever, improve after a while.

First of all, there are the ghostly apparitions witnessed by the group of people attending the occult evenings. Not only would the method for making the ghosts appear be more at home in an episode of Scooby Doo, it has been used in such Scooby Doo episodes as Hassle in the Castle and The Fiesta Host is an Aztec Ghost! So not really all that believable for a historical mystery set in the 1950s. Secondly, there's the identity of Stafford, which is half-decently handled, but nothing particular clever or noteworthy. I think something more could have been done with the murder of a self-proclaimed immortal. Just think what someone like John Dickson Carr or Hake Talbot could have done with such a premise.

Oh, yes, I forgot to mention that, around the halfway mark, Stafford's body is found in the woods around the Endicott home. But who cares. This potential interesting plot-development degenerates into an old, tired and uninspired blackmail/murder plot.

Brown provided the story with a second body, which showed some imagination in its staging, but also revealed he's hardly a top-notch plotter as far as this genre is concerned. I can only conclude that the reason for introducing this second corpse was in order to shoe-horn in a false solution, which needed an innocent person who could not object to being accused. So this person simply had to die.

On top of the poorly, disappointingly conceived plot, the book was also mind-numbingly boring and I couldn't care less about any of the characters. Simply did not care about any of them. I eventually began to skim through the book, because I wanted it to be over. Hence why I'm dragging myself through this equally poorly written review.

At the beginning of this blog-post, I name-dropped a fairly recent discovery of mine, John Russell Fearn, who, admittedly, was a second-stringer, but that hardly seems fair when you compare his work to such modern-day equivalents as Richard Hunt's Deadlocked (1994), David Marsh's Dead Box (2004), Frederick Ramsey's Stranger Room (2009) and Eric Keith's Nine Man's Murder (2011) – or the subject of this blog-post. Yes, I know. Our beloved Golden Age also produced raw sewage pressed between two book covers, but their modern counterparts are usually so much worse.

Well, sorry for having brought this one up and really wish I had something more substantial to tell about the book, but I had not much to work with and, honestly, lacked the interest. I'll try to dig up something better for the next blog-post. In the meantime, I recommend my reviews of Tyline Perry's The Owner Lies Dead (1930) and Isaac Asimov's Lucky Starr and the Big Sun of Mercury (1956), which were both excellent mystery novels for very different reasons.
Geplaatst door TomCat on 4/25/2017