Under a Cloud of Suspicion

Over a period of half a century, Lucy Beatrice Malleson wrote nearly seventy detective-and suspense novels and employed a handful of pennames, but the one that garnered her the most success was that of "Anthony Gilbert" and she used the name for the fifty-some books about her series-character – a morally ambiguous lawyer named Arthur Crook. A likable antihero cut from the same cloth as Craig Rice's John J. Malone and Erle Stanley Gardner's Perry Mason.
I've only read six of her novels, a mere fraction of her complete output, but my sampling showed how she danced between domestic suspense (e.g. Something Nasty in the Woodshed, 1942) and the formal detective story format (e.g. Death Knocks Three Times, 1949). My impression is that she was more gifted when writing tales of suspense, but was not entirely inept when handling a puzzle-oriented plot. And that brings us to the subject of today's blog-post. 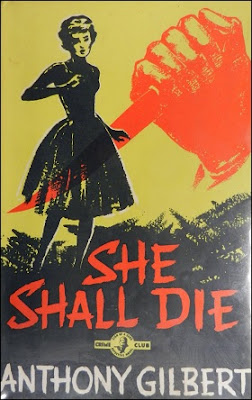 She Shall Die (1961) came late in Malleson's career and as a rule I tend to be little hesitant when it comes to detective novels published after 1959, but this particular title has been on my wishlist ever since I came across a short review by Nick Fuller on the GADWiki – who described it as a "really good" mystery with a "well-clued Agatha Christie-type solution." He also accurately described Crook as having "something of the gusto of H.M." So it was about time I finally knocked this title of my list.

Hattie Savage is the attractive "daughter of a rich tycoon" and she has a knack for attracting both men and trouble, which eventually lands her in a police cell on suspicion of murder.

The trouble began for Hettie when a young man, Richard Sheridan, proposed to her, but she rejected him and Sheridan did not take that very well. Sheridan told Hattie he would not be able to live if she did not accept him and threatened to put "a bullet through his brain," but instead of walking away from the situation Hattie did the unthinkable – she handed him sleeping tablets and told how many it would take to kill himself. So the next morning there's a policeman on her parents doorstep with the news that Sheridan had been found dead in his bed. The doctor had no doubt that he died from taking an overdose of barbiturates.

As to be expected, Hattie receives very little public sympathy and at the inquest "the coroner barely concealed his sense of outrage," but the jury returned an open verdict and she's free to go. She was not cleared from any wrong doings in the court of public opinion and within twenty-four hours of the verdict the anonymous letters-and telephone calls began, which made her decide to escape the limelight and "flee to Paris." However, the real trouble began to manifest itself during her absence.

During the inquest, Marguerite Grey, "a saleswoman in the glove department of Booties," came forward and claimed to have been engaged to Sheridan, which would throw serious doubt on Hattie's story, but Marguerite is unable to produce any proof and nothing was done with statement. But the small cast-of-characters who surrounded Hattie and Sheridan had not seen the last of her.

Marguerite is determined to wriggle her way into the community and begins with Sheridan's aunt, Miss Alison Sheridan, who runs a popular restaurant and she is the first to discover that the girl is a regular snake in the grass – one with a penchant for blackmail. Marguerite knows something about her dead nephew that has to be kept a secret. Miss Sheridan has to allow Marguerite into her home, but her blackmailing antics doesn't stop there and even tries to sink her claws into Hattie when she returns with a husband in tow.

However, Marguerite had "the natural vanity of the blackmailer" and it never occurred to her "she might be in danger herself." Unsurprisingly, someone ends up planting a knife between her shoulder blades.

Hattie is placed under arrest and her new husband, Philip Cobb, rushes off to get the help of Arthur Crook, "that rogue elephant among lawyers," who only appears in the last five chapters, but that's all he needs to clear up this mess and even provides a false solution based on A.E.W. Mason's At the Villa Rose (1910) – which succeeded in completely throwing me off my game for a moment. The false solution was presented very convincingly and briefly assumed I had been foolishly trailing a well-placed red herring. Luckily, I was not entirely wrong about the explanation.

I correctly figured out what was at the heart of both deaths (spotted all the clues!) and this allowed me to identity the murderer, but got a thing or two wrong about how this information fitted the overall picture. Still, I was more right than wrong and loved the level of fairness that allowed me to play along on an equal footing with Crook.

She Shall Die may be a relatively short domestic tale with a small, intimate cast-of-characters, but the structure of the plot and placing of the clues is what one would expect from the Grandest of the Golden Age. On top of that, there are certain components of the plot that show some strokes of originality. So to know that such a classically-styled, fairplay mystery novel was published during that dark decade for our genre, the sixties, was very heartwarming, because there are not that many examples from the same period.

The only other (classical) examples I can think of are Robert van Gulik's The Red Pavilion (1961) and Helen McCloy's Mr. Splitfoot (1968). I'm sure there are a few more, but this was literary all I could think of at the moment.

However, while the plot burned and shimmered with all the brilliance of the 1930s, the cultural references clearly showed that the story was set in a completely different time. One of the characters mentioned they were living in "the shadow of the atom-bomb." Khrushchev gets a throw-away reference. A refugee committee hovers in the background and suspect they dealt with people who fled Eastern Europeans. A police sergeant is mourning the fact that "even the television had lined itself up with the wrong side," because they were giving away all the secrets of police work. I've always found these cultural and (now) historical references to be interesting ornaments on my detective stories.

Anyhow, She Shall Die is a well-written, fairly clued and soundly plotted detective novel that gives the reader all the room needed to arrive at the same conclusion as Crook, which should please every self-proclaimed armchair detective. I can therefore recommend the book to everyone who loves a fair shot at beating the detective to the solution. And you should be able to do it, if you're observant enough.

Well, let me cut-off this overlong review here and tell you that the next review will fall into the locked room-and impossible crime category, because I received some interesting titles in the mail this week. I just have to make a decision which one of those titles will be devoured first.
Geplaatst door TomCat on 4/12/2017