Dead in the Water

"Where large sums of money are concerned, it is advisable to trust nobody."
- Andrew Lippincott (Agatha Christie's Endless Night, 1967)

Back in 2015, I finally got around to reading a couple of Freeman Wills Crofts' detective novels, The Cask (1920) and The Sea Mystery (1928), which were excellent and showed the hand of an intelligent, technically-minded and no-nonsense writer – who has been unfairly labeled as a humdrum. I wanted to continue exploring his work, but got distracted by the deluge of reprints mentioned in my previous blog-post.

Luckily, Crofts is one of the authors currently being reissued en masse. Several of his earlier books appear to be in the public domain (e.g. The Pit-Prop Syndicate, 1922), but the British Library and Collins Crime Club have both reprinted a number of titles from the late 1920-and 30s. So far, they've brought back such interesting titles as Sir John Magill's Last Journey (1930) and The Hog's Back Mystery (1933), but there was another title that caught my attention. 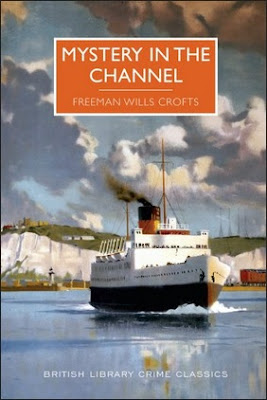 Mystery in the Channel (1931), or Mystery in the English Channel, is the seventh book about Crofts plain, but highly competent, policeman-character, Inspector Joseph French. What attracted my attention was its tantalizing premise.

A cross-channel steamer of the Southern Railway Company, Chichester, passed the halfway mark on their journey through the English Channel when they came across a motionless yacht. The name of the vessel is the Nymph and as they come nearer to the boat they see a man "lying in a heap on the deck." Upon closer inspection, the crew members of the steamer discover that there are two dead men aboard the pleasure yacht, shot through the head, but are unable to locate a gun – eliminating the possibility of a murder-suicide. So one of the crew members is tasked with sailing the "rich man's toy" back to England and handing the floating crime-scene over to the authorities.

The victim's are quickly identified as Paul A. Moxon and Sydney Deeping, the chairman and vice-chairman of Moxon's General Securities, which finds itself at the center of a financial disaster when they become unable to meet its liabilities. The total deficit is believed to approach eight million pounds, left thousands ruined and according to the newspapers "the tale of disaster is not yet complete." And they weren't wrong.

Bryce Raymond and Joshua Esdale, a third partner and chief accountant, are nowhere to be found, but they're not the only ones who are unaccounted for: a large sum of cash money, "a million and a half sterling," have disappeared from the company's strong-room – which makes for a pretty bundle of trouble.

Inspector French goes about his task with dogged determination and shrewdly reconstructed what roughly happened aboard based on blood-stains and a pool of blood. Equally impressive is chapter nine, titled "Distance Over Time Equals Speed," in which French reconstructs the movements of the various vessels involved and tries "to fix the point of the murders." Something he calls Point M. By the way, I think that would have been a better title for the book than the more mundane and less imaginative Mystery in the Channel.

Anyway, the investigation is not a solo performance on French's part and his success depends on the large, sprawling police apparatus of two countries.

As an overseas colleague said to French, "this is no longer a job for one man," but "a case for the organization" that could field hundreds, or even thousands, of men to follow up on every single lead. Crofts eagerly gives his readers a glimpse of the machination of these organizations and assigns various policemen to such background tasks as following "a trail of numbered banknotes" or trying to locate one of the missing men, which is painstaking work stretched out over several weeks – one throw-away remark revealed the case had been dragging on for six weeks. 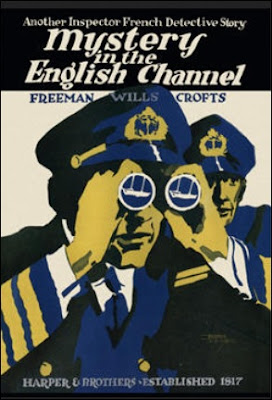 So you can say that this series, particularly this title, is an early predecessor of the modern police procedural, but the plots are unquestionably a product of their time (i.e. pure Golden Age). The devilish clever and twisted plot here was unraveled by slow, determined police work, but carries all the hallmarks of a vintage detective novel and a notable aspect of this was the pool of blood aboard the yacht. French's first conclusion proved to be not entirely correct and emerging evidence showed there was a second explanation for what, initially, seemed fairly straightforward. Just what you'd expect from a classic mystery novel from the early 1930s!

I also loved the fiendishly clever, slightly technical, but ultimately simple, alibi-trick of the murderer. Or how the explanation has answers to the questions I began to ask myself while reading the book. Like why didn't the murderer threw the bodies overboard and scuttled the yacht? It would have made it all but impossible for the police to solve the case, but the solution provided a satisfying answer for these question.

I should also point out that Mystery in the Channel, like so many mysteries from the 1930s, was rife with condemnation for the figureheads in the financial calamities that left thousands of people "irretrievable ruined." On several occasions, Crofts gives brief details how people were ruined (e.g. "elderly men, having to start life again. And heaven knows where they'll get jobs."). Such characters as bankers, stockbrokers and financiers were not the most popular characters in the detective-fiction of the post-1929 world.

Apparently, Crofts loved ships and was personally very interested in the inner-workings of large business enterprises, which both come to the foreground in Mystery in the Channel and he erected a first-rate plot around these two pet subjects – in which every piece of evidence and event fits together like a jigsaw puzzle. Crofts may not have been a writer with too many literary pretensions, but he was a plotter of the first water and I should make an excursion to his work more often.

On a final note, I sure hope Sudden Death (1932) and The End of Andrew Harrison (1938) are considered for reprinting in the hopefully not so distant future. So, if any of you publishing people are reading this, you might want to scribble those two titles down.
Geplaatst door TomCat on 4/09/2017