Since 2015, I discussed nearly a dozen books from The Three Investigators series, mostly those written by Robert Arthur and William Arden, but also one of the many titles penned by M.V. Carey. Between them, they imagined countless alluring problems and tight spots to occupy those three lads from Rocky Beach, California, but rarely did they allow the boys to stumble across a body – certainly not a really well preserved one that could be a homicide victim. 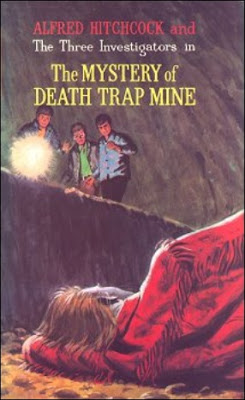 The Mystery of Death Trap Mine begins when they receive a surprise visit in their secret headquarters from a character who previously appeared in The Mystery of the Singing Serpent (1972), Allie Jamison, who's the daughter of one of the wealthiest families in Rocky Beach. Jupe, Pete and Bob helped Allie's family with getting "rid of a sinister house-guest" and "exposed a diabolical blackmail plot," but this time she wants to keep her uncle, Harry Osborne, from having "the wool pulled over his eyes" - which has, according to her, something to do with his suspicious next door neighbor.

Osborne has bought a Christmas tree ranch in Twin Lakes, New Mexico, which used to be a mining town. There's an exhausted silver mine, called Dead Trap Mine, because "a woman once wandered in there" and "fell down a shaft." Some say she still haunts the place.

So the mine is an extremely dangerous place and locals sealed the opening when a missing five-year-old nearly got herself killed in there, but Osborne sold the mine and a chunk of land to a returning local, Wesley Thurgood. One of the first things Thurgood did was to remove the iron grill from the entrance and bought a guard dog to watch the place. He also puttered around the site in brand-new jeans, a hard hat and manicured nails! All of this makes Allie mighty suspicious and deviously gets her uncle to offer Jupe, Pete and Bob a summer job, pruning Christmas trees, but their real task will be helping Allie getting to the bottom of the mine business.

Surely, not long after arriving at Twin Lakes, Allie does seem to have grounds for suspicion, because Thurgood appears to have lied about something. And why did he fired a shotgun inside an empty mine?

Of course, they're going to do exactly what any kid or teenager would do in their place: ignore Osborne's warnings, trespass on Thurgood's property and descend into the forbidden mine, but, "about fifty yards into the mountain," Thurgood suddenly appeared behind them, while Allie started to scream in front of them, pointing to the bottom of a dark pit – where a body "lay strangely twisted on the rocky floor of the shaft." The well-preserved, mummified corpse belongs to a convicted criminal, Gilbert Morgan, who had been released from prison five years previously and then simply disappeared. So there you have two problems that may, or may not, be intertwined.

On the one hand, you have the strange behavior and protective attitude towards "a played-out silver mine" on Thurgood's part, while on the other you have the presence of a dead parole-jumper in that same mine.

The problem of the dead body in the mine is tackled by going through some back issues of the local newspaper, Twin Lakes Gazette, which chronicles absolutely everything that happened in that small and remote town. And there they learn about the placing of the iron grill and the discovery of a stolen car near the mine. However, it is the accidental discovery of a five-year-old Phoenix newspaper that tells them about a crime that appears to have a connection with both the body and the abandoned car. The other problem has an interesting geological clue, the appearance of "a bit of gold in a played-out silver mine," which eventually explains the gunshots, the underground explosions and Thurgood's behavior, but not in the way you might assume. I liked this aspect of the plot the most.

In between snooping, Jupe, Pete, Bob and Allie have to dodge newspaper reporters, curiosity seekers, midnight prowlers, guard dogs, rattlesnakes and adult supervision. And the latter seriously hampered their movement on one or two occasions. However, they still got around to playing detective and they even visited a ghost town, called Hambone, which received a deathblow when their mine closed, but made for a great backdrop for an excellent and one of the more memorable scenes from the book – which will culminate in the obligatory spot of danger when a couple of criminals show up. Pete and Allie find themselves at their mercy and that of the scorching sun of a stretch of desert land, while a helicopter is desperate searching for them.

So, all in all, The Mystery of Death Trap Mine was a very readable, well-characterized and competently plotted entry in the series. Granted, the plot was not stellar, however, all of the plot-threads hang together coherently. They were just a bit commonplace. You could partially blame this on the author not daring to make the death of Morgan a full-blown murder. Carey said in an interview that they had not "any murderers in the series," but she could see "where the life-is-not-fair-so-I-think-I'll-hold-up-the-bank type of thinking can lead to murder." I think the plot of this book would have been a perfect vehicle to tell exactly such a story. And hey, she already supplied the body, so why not go all the way, right?

Secondly, Carey seems to have been a very character-driven writer and you can see this in how she treated all of the characters. Even the minor ones seem to be more than just background decoration, but the most eye-catching here is how Allie interacted with the boys. I got the distinct impression that Carey was setting Allie up as a counterweight to Jupe and planted the seeds of a potential romantic relationship between her and Pete, but the series publisher probably told her not to pursue this angle. Because Allie made no further appearances in the series.

Well, that brings us to the end of this review and I can already reveal that the next one also has a mining backdrop. So you can probably guess which mystery novel that's going to be.
Geplaatst door TomCat on 4/18/2017