John Russell Fearn's Flashpoint (1950) was originally published as by "Hugo Blayn" and introduced "a little man who looked like the traditional bust of Beethoven," Dr. Hiram Carruthers, who's "a sort of general specialist" often called upon by the police to help them with the scientific end of a murder case – earning him the moniker of "the 'Admirable Crichton' of scientific specialists." Sadly, Flashpoint was the last of the Dr. Carruther novel on my big pile, but hey, I closed this series on a high note. You could almost say it ended with a bang! 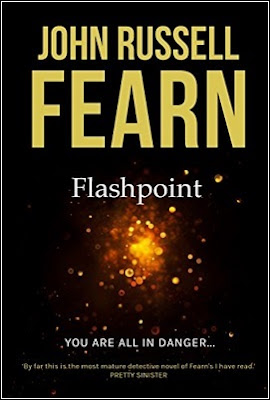 The story takes place in a small, unassuming town, named Halingford, where a young man by the name of Gordon Drew returned to after an absence of eight years.

Upon his arrival, Drew takes a leisurely stroll down memory lane and observed the changes the town underwent during those eight years. He was also able to reacquaint himself with a childhood friend, Janice Lloyd, who he meets again as an organizer of "a social sale-at-work" in a shabby, empty shop with tables loaded with "a miscellany of objects" – hovering over these tables were elderly, needy and "surprisingly genteel" men and women. An embarrassed Drew reflected he was "too well dressed for this sort of affair" and "perhaps too well nourished."

A very brief, but interesting, glimpse at one of the bottom rungs of society of post-war Britain, which now even included the once well-bred, upper-class gentry. This is a side of the detective story too often ignored by so-called scholars of the genre who primarily look at the remnants of the Golden Age that are still standing, but that's a topic for another time. So let's get back to the story at hand.

One of the stops Drew makes in Hallingford is "the residence where he had been born and reared," a Georgian house, but as he stands and looks at it, lost in thought, an extraordinary figure emerges from the place. A man of small stature, like a boy, with the head of Ludwig van Beethoven and tells Drew not the loiter, because his house was a private residence and not a museum. The name of the man is Dr. Hiram Carruthers.

Surprisingly, this confrontation ends with Drew being invited inside and is offered a position as Carruther's secretary.

So, a pretty nice beginning without a hint of the coming calamities, but, a day or two later, the local greengrocer and fishmonger, Oscar Bilkin, receives an anonymous letter with an ominous warning – telling him to "GET OUT BEFORE TOMORROW. YOU ARE ALL IN DANGER." Superintendent Clifford Denning promises Bilkin that his shop will be searched, top to bottom, and one of his men will stand guard that day. However, the next day the shop is leveled by a huge explosion and the fishmonger is killed. Here's where the problems really begin to manifest themselves.

As a brief aside, I have to say that the destruction of the fish and fruit store is one of the most cold-hearted crimes I have come across in a detective story. Not only why the store had to be destroyed, but why its owner had to die and the method employed to achieve this was pure evil. This murderer is more than deserving of an eight o'clock appointment with Albert Pierrepoint. 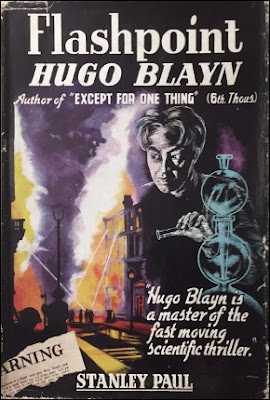 The smoking crater that once was the Bilkon shop is closely examined by police fire-experts and fire assessors of the insurance company, but they're unable to find any remnants of "an infernal machine or gadget for fire-raising." Nor did they find any trace of "a prepared chemical nature."

An original impossible situation that was surprisingly easy to solve based on such clues as the funeral pace of the ice delivery van and the yellowish color of the block of ice that was delivered. These aren't spoilers. All of this was described and pointed out before the explosion. I assume Fearn was confident enough that most readers lacked the scientific knowledge to figure out "this ingenious little trick," but here he severely underestimated the repository of arcane knowledge of detective readers. Luckily, there were two more quasi-impossible fires and explosions.

Rupert Granwell is the manager director and owner of a chain-store, who received a similar anonymous warning, which brought in the police who, once again, searched every floor of the department store and surrounded the place with policemen – only to see how the building inexplicably catches fire and is consumed by the flames. A salient detail is that the dissatisfied head dispenser of the in-store pharmacy, Clayton Ross, walked out on Granwell without giving his notices and simply disappeared. A third and final incident happens when an explosion kills the local florist.

Superintendent Denning enlists Carruthers to help him figure out the secret behind these mysterious fires and explosions, or else the case might go to Scotland Yard, but Carruthers only provided a scientific explanation for the (quasi) impossibilities. It was Denning who found the motive and colored the murderer. And this is where Flashpoint distinguishes itself from Fearn's other detective novels.

Usually, the impossibilities are the focal point of the plot and the murderers tend to be fairly easy to point out, but here it was exactly the other way around. The impossibilities were more than solvable, especially the first one, but the murderer this time was not as easily spotted. On the contrary, it took me a while before I caught on! If I remember correctly, this is the first time that happened with Fearn. I also have to give him props for the ambitious motive of the murderer. A nifty twist on one of the age-old motives people have killed for throughout the history.

So, all in all, I would group Flashpoint together with Thy Arm Alone (1947), Except for One Thing (1947), Death in Silhouette (1950) and the posthumously published Pattern of Murder (2006) as one of Fearn's triumphs. I commented in the past that Fearn was probably closer to Arthur Porges than to John Dickson Carr and Flashpoint gives the reader an idea what a novel-length detective story by Porges could have been like. So what more do you want?

On a final note, John Norris of Pretty Sinister Books reviewed Flashpoint before it was reissued by Endeavour Press earlier this year. It's well worth a read as he touches on things I passed over.
Geplaatst door TomCat on 8/29/2018