Once in a Lifetime

"It is an old maxim of mine that when you have excluded the impossible, whatever remains, however improbable, must be the truth."
- Sherlock Holmes (Sir Arthur Conan Doyle's "The Adventure of the Beryl Coronet," collected in The Adventures of Sherlock Holmes, 1891)

Back in June, I posted a review of John Russell Fearn's Black Maria, M.A. (1944), originally published as by "John Slate," which was brought to my attention in a blog-post penned by John Norris – titled "Neglected Detectives: Maria Black, MA." The post closed with some enticing comments about the fourth book in the series. 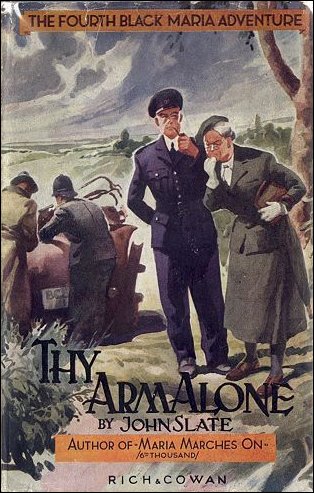 In his blog-post, Norris described the central plot point of Thy Arm Alone (1947) as "one of the most bizarrely executed" and "ingeniously planned murders in all of detective fiction." I agree Fearn constructed a very imaginative and practically unique plot. One that would force Sherlock Holmes to eat his own words when he proclaimed there "was nothing new under the sun" and how "it has all been done before."

Betty Shapley is "the belle of the village," a small English place called Langhorn, where she "assumed the position of sub-post-mistress" in the general store-cum-post office owned by her parents – which she felt was a comedown from her education at Roseway College. However, Betty is very beautiful and always basks in male attention, but she three principle admirers vying for her affection: Vincent Grey, Tom Clayton and Herbert "Herby" Pollitt. She played "one against the other with sublime disregard for their feelings."

So you would expect Betty Shapley to fulfill the role of lovely murder victim, while her three beaus assume the part of suspects, but, instead, a cruel turn of fortune teaches her "a costly lesson."

During a late-evening date, the car of Herby broke down underneath a deep purple sky, heralding the approaching night, which is streaked that evening with the tails of shooting stars, but Betty finds that her companion is not exactly in a romantic mood. He does not even want to make a wish. So they decide that she goes back to the village to fetch Tom, who runs a garage, to tow the stranded car from that dangerous spot in the road, but that's where one of the strangest sequence of events begin to unfold – something she gets a first glimpse of when she sees Vincent cycling "like a madman." A madman "who has seen unimaginable horror" and is "fleeing from it as fast as he can go," which happened to be from the spot where she left Herby. But she does not learn what took place on that dark stretch of road until a pair of coppers appears on her doorstep.

Inspector Morgan and Sergeant Claythorne tell her that, upon his arrival, Clayton found the car ablaze and had to drag the body of Herby out of the flames of the burning wreckage, but he had been dead before being positioned in the car – top and left side of his skull had been battered to a gruesome pulp. It was an injury that had obliterated or scorched half of his face, which is what provided the murder with an impossible angle: what kind of heavy and jagged weapon could do so much damage with a single blow? 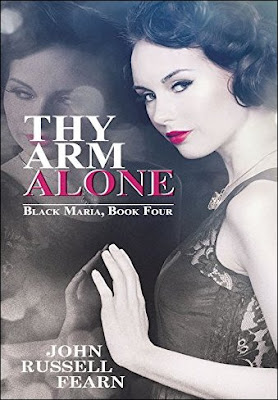 In any case, the police want to know the whereabouts of Vincent Grey, which is when Betty decides Vincent is the one she always loved. Only problem is that he's now a wanted man. Regardless, Vincent manages to get a message to Betty, which resulted in a minor cat-and-mouse game between Betty and Police-Constable Rogers, but her most important move was returning to Roseway College for Young Ladies – to ask help from her old school teacher and amateur criminologist, Maria Black. A woman often referred to as "Black Maria." Or a nosy old dragon. Depending on who you ask.

Maria Black has (successfully) meddled in murder cases and Betty wants her to interfere in the investigation, which she does in a number of different ways: she consults her collection of scientific literature in the hope of finding a possible explanation for a bunch of peculiar clues. Some of these strange pieces of evidence include inexplicable "traces of a metallic element in the wound," a blackened patch of soil not far from the blazing car and a pier of burned pliers. She also employs the services of an old friend, "Pulp" Martin, who pokes around the house and ash-cans of one of the suspects, which pretty much took care of the required legwork in the case. And the pages are scattered with Maria's helpful case-notes.

All of this makes for a very lively and interesting mystery novel, but the genuine star of the story is Fearn's ingenuity and originality. I'm very proud of myself for having figured out the general idea behind the death of Pollitt very early on in the story (there was some nice foreshadowing), but I was craftily lead away from the simple, but unbelievable, truth by the layers of subterfuge – wickedly spun around the problem by the guilty party.

Admittedly, not everyone is going to swallow the root-cause of Pollitt's death, which I can understand, but you've to admire how Fearn took the ball and ran with it. As the culprit explained towards the end, "a chance like that only happens once in a lifetime" and "I made full use of it." I agree! If there's anything to be said against this story, it’s that it lacked a Carrian-style notes for the curious. The last sentence of the book kind of begged for such a feature, but other than that, I absolutely loved it. Thy Arm Alone is an original piece of work. Even after seven decades!

So if you think you've seen all the dirty tricks... you should definitely give this one a shot.
Geplaatst door TomCat on 10/03/2016