A Scandal in New Orleans

"When the night wind howls in the chimney cowls, and the bat in the moonlight flies,
and inky clouds, like funeral shrouds, sail over the midnight skies –
When the footpads quail at the night-bird's wail, and black dogs bay at the moon,
Then is the specters' holiday – then is the ghosts' high-noon!"
- Sir Roderic Murgatroyd (Gilbert & Sullivan's Ruddigore, 1887)

Last week, one of my fellow locked room enthusiast, "JJ," posted a two-month notice, "John Dickson Carr is Going to Be 110 – Calling for Submissions," which is an open invitation to post Carr-related reviews and blog-posts on the day marking his 110th birthday – which is on November 30, 2016. I immediately called dibs on the criminally underrated Captain Cut-Throat (1955), but the notice still left me with an urge to return to Carr. 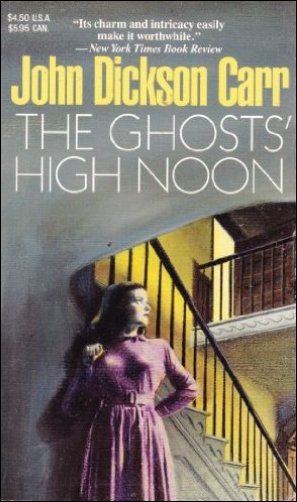 Fortunately, I still have about half a dozen of his (primarily) non-series work residing on my prodigious TBR-pile. And one of them promised a Last Hurrah for my all-time favorite mystery novelist, the great John Dickson Carr.

The Ghosts' High Noon (1969) is a historical mystery and Carr's third-to-last novel, which would only be followed by penultimate Deadly Hall (1971) and the much-maligned The Hungry Goblin (1972). These titles were published during the last twelve years of Carr's life and this period showed a painful decline in the quality of his writing. A downturn that first overtly manifested itself in The House at Satan's Elbow (1965), but one of these last novels seemed to be relatively rot-free: the aforementioned The Ghosts' High Noon, which received some honest criticism, but never the abuse leveled against its contemporaries – e.g. the mediocre Panic in Box C (1966) and the tedious Dark of the Moon (1967).

On his excellent website, Mike Grost has shown the greatest amount of enthusiasm for the book, which he labeled as "a genuine mystery classic" with "a well done impossible crime."

So it has always struck me as a sudden, but briefly lived, revival during the final stage of Carr's literary career. I simply decided the time had come to take it off my TBR-pile. And I know, I know. I should've probably saved the book for November, but who asked you to drag common sense into my decisions? Get out!

The Ghosts' High Noon is set during the early days of Carr's early childhood, 1912, when his own father, W.N. Carr of Pennsylvania, was elected to Congress and the United States was in the throes of "a three-cornered fight for the Presidency" – pitting the incumbent W.H. Thaft against Democratic Governor Wilson and the boisterous Teddy Roosevelt for the Progressives. There are references throughout the book to these three gentlemen, because the plot of the story is tinged with political intrigue.

The protagonist of the story is a newspaper reporter, Jim Blake, who wrote bestseller, The Count of Monte Carlo, which gave him new found prosperity and "freedom from the ancient shackles." But he's adverse to take on special assignments as a reporter. So when Colonel George Harvey, "president of the stately old publishing house in Franklin Square" and "the very active editor of Harper's Weekly," contacts him with a particular request he accepts. Colonel Harvey wants him to travel down to New Orleans to write an article on a promising Congressional candidate, James Clairborne "Clay" Blake.

James "Clay" Blake is a young lawyer and a colorful character, who's running for Congress, but he's unopposed and therefore can't help being elected. So the Colonel wants James "Jim" Blake to write a personality piece on his namesake, but there's also an underlying motive: the underground wire is reverberating with rumors "that some enemy is out to ruin him." As an investigative reporter, Blake immediately sets out to work and makes a stopover in Washington before traveling to New Orleans. There he learns from a legendary police reporter, Charley Emerson, what the tool of Clay Blake's potential downfall could be: a high-class courtesan, Yvonne Brissard, who captured the full attention of the future Congressman. In spite of their discreet conduct, it became very evident that "the Creole siren and the Anglo-Saxon lawyer" have "fell for each other like a ton of bricks." A scandal in the making, but could the courtesan be a part of "the alleged plot" against the budding politician?

On his way to New Orleans, Jim encounters a pair of mysterious figures: first of them is his love interest, Gillian "Jill" Matthews, who literary walks into his arms, but also vanishes when she wants to and her role in the overall story is a actually a genuine plot-thread – a pretty good one at that! The second figure is an unknown person on the train, who knocks at his compartment, but when he opened the door there was nobody outside. And the porters on either side of the corridor swear they saw nobody.

This incident is presented as an impossible problem, but the explanation is extremely bad and Robert Adey did not even deign it worthy of being mentioned in Locked Room Murders (1991). Luckily, there's a bone-fide locked room mystery in the second half of the book. 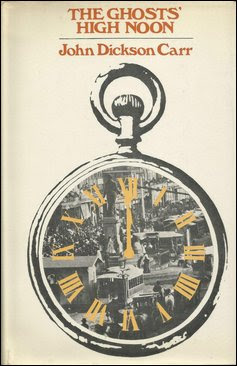 However, the pace of the story considerably slows down until the murder occurs and this section of the book has Jim encountering several characters in the New Orleans setting: the Colonel and Charley recommended Jim to ask Alec Laird for help, the high khan of the Sentinel newspaper, who is described as "an unredeemed puritan," but also someone you want to have in your corner. One of his relatives an elderly dowager, Mathilde Laird, a crusty aristocrat who inexplicably rented the village of her dead and beloved brother to Yvonne Brissard. She has a son, Pete, who she overly mothered and refused to even let him drive his own car. So he has his own personal chauffeur, Raoul. And then there's Flossie Yates. A woman who can discreetly be described as "the madam of a brothel."

Eventually, the plot begins to pick up the pace again. One of Jim's old classmates, Leo Shepley, "a rake and bon viveur," becomes entangled in the plot and this does not end well for him: there are several witnesses, including Jim, who saw him speeding like a devil out of hell in his two-seater Mercer – which ended with a crash and the sound of a gunshot inside a partially locked-and watched shed. Shepley had been shot through the head from close range, but the police fail to find a gun at the scene and nobody could've entered or left the shed without being seen. So how did the murderer or the murder weapon manage to vanish from the closely watched shed?

The seemingly impossibility of the murder frustrates Lieutenant Zack Trowbridge and wonders out loud "what kind of a murderer" vanished "like a soap-bubble as soon as he pulled the trigger," but Jim "pieced the whole thing together less'n twenty-four hours" after the murder. Admittedly, it's a pretty clever piece of work and showed how Carr was still capable of constructing an intricate locked room puzzle. Even if the execution required some low-conscience life forms (i.e. pawns) to make it work. And the motivation for making this an impossible crime is also noteworthy.

So the storytelling, characterization, setting and the plot were somewhat uneven, but, overall, The Ghosts' High Noon is a very consistent detective story. In any case, the plot and writing are far better than what most readers would expect from one of his novels from this late date. That being said, I've to point out one thing: by the late 1960s, Carr had sadly lost his ability to write historical fiction. Carr's writing used to be able to breath life into long-dead, dust covered periods of history (e.g. The Murder of Sir Edmund Godfrey, 1937), but here he never came further than making some clunky (pop-culture) references. One of the characters even notes how long-distance phone calls would've been considered a miracle only a couple of years ago, which felt really, really forced.

I thought this was a sad aspect of the book, because Carr was not only the undisputed master of the locked room, but also an early champion of the historical mystery novel. And the historical mystery novel was also his retreat when began to tire of the modern world (i.e. post-WWII England). This allowed him to add a few additional classics to his resume when the quality of his regular series began to suffer. Nobody will deny that his post-1940s historical mysteries were better than any of the Dr. Gideon Fell or H.M. novel that appeared in the same period. So it was sad to see that by the late 1960s he was unable to bring the past back to life as once had done in such delightful works as The Devil in Velvet (1951) and Fear is the Same (1956).

Well, look at me, I still managed to end this review on a depressing note! So, yes, The Ghosts' High Noon has some of expected flaws of later-day Carr, but not nearly as many as most would expect and large parts of the plot shows flashes of the old master. That alone should warrant investigation.

Let me end this overlong review by directing your attention to my previous review, which is of the excellent translation of Alice Arisugawa's Koto Pazuru (The Moai Island Puzzle, 1989).
Geplaatst door TomCat on 10/08/2016