Turn of the Screws

John Russell Fearn was a prolific, full-time writer, who dabbled in a medley of genres, but, as busy as he was, he always found the time that could be carved out of his writing schedule and redistributed those precious hours to his cherished hobby – homemade movies and the cinema. Fearn was "the proud owner of a 9.5 film projector" and used to show silent, black-and-white movies from the 1920s to his friends at his home. I suspect those friends were a part of the cine-club he had founded.


A club of early movie buffs who made and acted in their own (homemade) film productions, which included a silent movie, titled Unfinished Journey, based on a long-since lost manuscript by Fearn about "an impossible murder on the railway." Lamentably, only "a few pages of the script survive." Fearn was also "an inveterate cinema goer in the 30s" and patronized the cinema twice a week. A habit, or character-trait, he passed on to one of his literary children, Miss Maria Black, who even investigated a murder at her local cinema in One Remained Seated (1946). 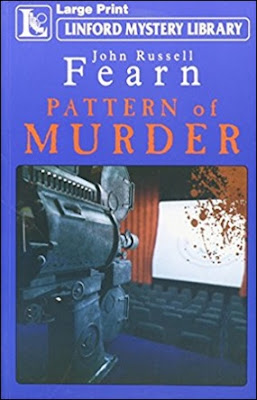 I would not be surprised if Edna May Oliver's portrayal of Stuart Palmer's Miss Hildegarde Withers influenced the creation Miss Maria Black. After all, Fearn probably saw the movie adaptations of The Penguin Pool Murders (1931) and Murder on the Blackboard (1932) in the thirties. I commented on the possible connection between Miss Withers and Miss Black in my review of Black Maria, M.A. (1944).

Arguably, the most important chapter in his life as a film whizz and cinema-goer came during the darkest days of the Second World War.

Fearn was declared medically unfit for combat and began to work at an aircraft factory in order to contribute to the war effort, but an opportunity landed in his lap during the second year of the war when a befriended cinema manager had began to lose projectionists "like wildfire" to the war-machine – eventually offering the position of (chief) projectionist to his well-known patron. Needless to say, Fearn was only an amateur with his roots in the silent movie era and had to spin the manager a tall tale about his experience, but the bulk of the technical work came down on the shoulders of his invaluable assistant. A sixteen-year-old trainee projectionist, Robert Simms, who ran the projection room once the door closed behind them.


This cross-generational relationship could have been a problematic one, but Fearn "freely confessed his lack of knowledge" of the modern equipment and was only too happy to allow Simms to be in charge behind the scenes. Simms recalled that the eccentric author was "utterly disarming" and they got along "like a house on fire." And added that, while he ran the projection room, Fearn often entertained "the staff with his astonishing feats of prestidigitation." Fearn was also an amateur magician and a member of the Magic Circle. No wonder I like the man so much!

You can find more details of Fearn's time as chief projectionist at Blackpool's down-market Empire cinema in Philip Harbottle's introduction to his science-fiction novel The Voice of the Conqueror (1954).

So you can say safely state that Fearn was an experienced amateur when it came to film in all of its aspects and his knowledge, as well as his personal experiences, turned up several times in his work. I already referred to One Remained Seated and noted in my review of the book, which dates back to February of this year, that the story is fairly unique where its background is concerned, because at the time I only knew of two detective novels that (partially) took place inside a cinema – namely P.R. Shore's obscure The Death Film (1929) and the fourth victim in Agatha Christie's The ABC Murders (1936) was murdered inside a movie theater. However, I have learned since then that Fearn penned a second detective novel with a cinema as setting. And it's an absolute gem!

Last week, Harbottle had a guest-post on this blog, titled "The Detective Fiction of John Russell Fearn," in which he recommended the posthumously published Pattern of Murder (2006) and provided a back-story to the book that had existed as an unpublished manuscript for almost half a century! 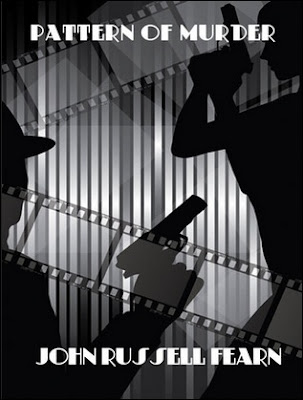 Fearn had originally titled the manuscript Many a Slip and was bylined as by "Hugo Blayn," which he had previously used for his Dr. Hiram Carruthers and Chief Inspector Garth novels, but the manuscript was rejected by his old UK hardcover publisher in 1957 – presumably on account of the shrinking lending library market and "publishers were tightening their belts." Thankfully, the book eventually got published, under its brand new title, by the Linford Mystery Library and Wildside Press.

Pattern of Murder is a very well-written, shrewdly plotted inverted detective story that can stand comparison with the best titles of this particular form of crime-fiction. Specifically the technical aspects of the plot are incredibly clever and the murder itself can be considered an impossible crime.

The story's antagonist, whose cunning mind and impulsive actions drive the plot, is the chief projectionist at the Cosy Cinema, Terry Lomond, who has been making money on the side by "buying and selling substandard movie equipment" – all of it property of the cinema. It's "quite a racket with some projectionists" and netted him a tidy sum of two-hundred pounds. Foolishly, he gambles his profits away at the horse races, when he over heard a hot tip, but the horse (with the great name Pirate's Cutlass) came in second. And worst of all, Terry phoned in his last-minute bet to his bookie and the money he now owed him got pick-pocketed at the racetrack. So he's now two-hundred pounds in the hole and no apparent means to scrap the money together.

Once "a chap starts going on the wrong track" he has "a habit of getting deeper in" and Terry is running down that track like the devil was on his tail.


Terry happened to be present in the owner-manager's office when the head cashier, Madge Tansley, put away a cash-box containing over two-hundred pounds and surreptitiously obtained the safe combination. So he decided to stage a burglary at the cinema, but Murphy Law's is dogging his every step and is practically caught in the act by one of the usherettes, Very Holdsworth. However, she isn't exactly squeaky clean herself and this, initially, compelled her into silence. Only problem is that the burglary places the second projectionist, Sidney "Sid" Eldridge, in an awkward position and Vera told Terry she would not allow Sid to take the fall for his crime. And this placed him on a road of no return.

As an usherette, Vera always occupies a tip-up seat fixed to the paneling at the side of the staircase during screenings. This position allowed her to see people approaching up the second half of the stairs, but Terry notices that the rearmost house-light hung directly over the tip-up seat and muses that if a house-light globe came down it would hit Vera dead on – which gave him a terrifyingly brilliant idea. I won't go into exact details, but the basic is that he would "loosen the screws to danger point" and uses vibrations to give the screws a final turn. And bring down the house-light globe at the exact moment of his choosing. A truly diabolical scheme!

I've debated with myself whether it would've been better had Fearn plotted Pattern of Murder along the same lines as his other excellent inverted mystery novel, Except for One Thing (1947), which showed the reader who the culprit was, but not how the crime was committed or what had happened to the body. This approach would have turned the book into a full-blown impossible crime story, because Terry was in the projection room with Sid when the globe came crashing down and the light-fixture was bare of any traces of sabotage. Only thing Terry had to do was loosening the screws and use sound-manipulation to do the rest. There would have been a scintillating array of clues to help you pick apart the how of the murder. 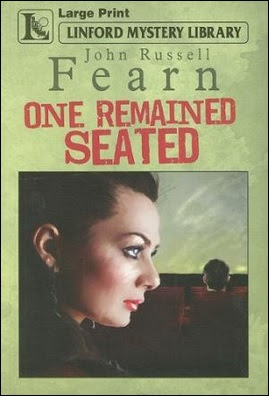 On the other hand, part of the attraction of the story is that the reader is shown every step Terry takes towards his own doom and the preparations for this apparently perfect murder is the absolute highlight. You get to see the germ of the idea form, watch the experiments and fine-tuning of the plan. And, finally, appreciate the less-than-perfect execution of the plan, because (of course) something almost goes wrong and Terry's intervention would provide another clue to Sid that not all is what it seems.

You see, Sid was very fond of Vera and becomes convinced there was more to her death than a mere accident. Slowly, he begins to piece together the aforementioned clues, which consist of a sliver of glass, a vandalized sound-track and a doctored film, but the gem-stone clues are the patterns in the dust discovered on the top of a still-case – a "queer beauty of circles, whirligigs and crescents." All of them perfectly formed.

As you probably deduced from my description of the plot, the last chapter ends with a final confrontation between Terry and Sid, but how that pans out is something you'll have find out yourself. Only thing I'll say is that (IMHO) the ending could have been more powerful had Terry, sort of, gotten away with it. The manager-owner of the cinema, Mark Turner, knew of Terry's criminal tendencies and sworn to "shift heaven and earth to get rid of him." So after his confrontation with the second projectionist, Terry should have been turned out on his ear into the rainy darkness in a way that would make the reader say, "yeah, you got away with murder, but what have you got to show for it?" That being said, the ending Fearn went with was not bad at all. And neatly cleaned everything up for the characters who were left behind. I just thought the ending was a little bit standard for such an excellent and original crime novel.


So, all in all, Pattern of Murder is an ace crime novel with an authentic background and an inventive murder method, which qualifies as an impossible crime, showing that the author was as adept at writing (character-driven) inverted mysteries as he was at (plot-focused) tales of detection. I recommend this one without hesitation and as a particular treat for fans of the inverted detective story.


Just a heads up for my next post... I'm going to take a stab at another title that was recommended by Harbottle in his guest-post from last week.
Geplaatst door TomCat on 12/07/2017