A Score to Settle

"Oh, it's a very nasty bit of goods, this is. And so clever, so filthily clever. Everything nice and simple. No fancy touches. I tell you one thing, all of you, for what it's worth. I've been telling it to myself ever since this started. We're up against good acting."
- Chief Detective-Inspector Alleyn (Ngaio Marsh's Enter a Murderer, 1935)

Back in October, Dean Street Press reissued the first ten of sixty-three Ludovic Travers detective novels by Christopher Bush and the earlier titles in this series are known for their minutely timed, clockwork-like plots – a plotting-style affectionately referred to as "Golden Age baroque." Reputedly, the plots became leaner and less in-depth during the post-WWII era without losing their intricate nature. 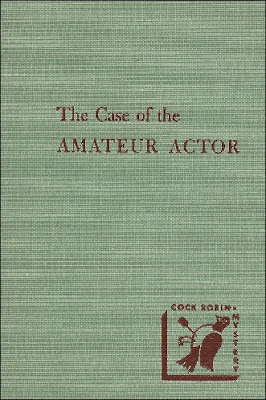 Nick Fuller commented on my review of The Case of the April Fools (1933) and described the later titles as "less GAD" with "more hardboiled influences." Travers acts as "a genteel PI" who narrates his own cases, but, according to Fuller, the first person narration works and there are clever plots to be found in this phase of the series. So my interest in later-period Bush was piqued and wanted to sample one of his titles from the 1950s. And that immediately brings me to the subject of today's blog-post.

The Case of the Amateur Actor (1955) is the 44th book about Travers and, as late an entry as it is, the plot is structured around Bush's favorite ploy of meticulously linking together multiple (unrelated) murders. A ploy he played around with in earlier titles such as Dancing Death (1931) and The Case of the Bonfire Body (1936).

The story begins when Travers, who now works as an operative for the Broad Street Detective Agency, is summoned by his policeman friend, Superintendent George Wharton, to Room 323 of the Royalty Hotel – where he's asked to identify the body of a murdered man. An engagement book with Travers' name in it had been found in one of the coat pockets of the victim and he identifies the body as having belonged to a literary agent, Gordon Posfort.

Someone had lured the literary agent to the hotel room, perforated his abdomen with no less than six bullets, and left him on the floor to face a lonely, agonizing death.

Travers and Wharton promptly arrive at the conclusion that the murder of Posfort wasn't "a simple killing," but a murder out of revenge, because "someone meant him to die a pretty painful death." A second clue is that the small caliber of the bullets insured irreparable damage instead of instant death. As the detectives poke around in the victim's past, they uncover a gem of a motive that fits the circumstances of the murder like a glove and concerns the untimely passing of Posfort's former receptionist-secretary, Miss Caroline Halsing – who died from "an overdose of sleeping tablets." Miss Halsing committed suicide when she became pregnant and there were more than enough willing avengers to be found in her immediate circle of family members and friends.

However, halfway through the story, the Posfort Case became an unsolved murder and left Travers with "a gnawing curiosity" as he began to realize that something had happened to which he might never find an answer.

Over the course of the second half, Travers is shepherded back onto the trail of Posfort's murderer by looking into two, seemingly unrelated, police cases.

The first of these two cases is known as the Marland Affair, a deadly robbery, in which the victim, Rickson, was beaten to death on a path that led to his home and his murderer took his attache case and wallet. Only thing linking both murders is that one of the suspects of the Posfort Case lives in Marland. But to be honest, this second murder is a pretty slender plot-thread in the overall scheme of the story and the book could probably have done without it. I believe the plot and story would have across as a tighter job without this second, sloppy murder in the background, but suppose it was necessary for the murderer to leave a trail behind that could be connected. But the third case is of integral importance to the plot. 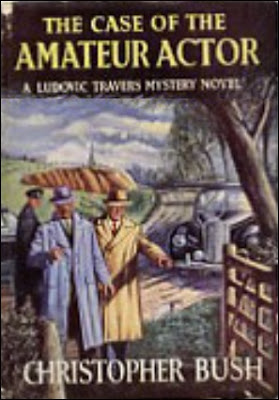 Richard Alton was a schoolmaster at Queen's School, Dorminster, who ran the school dramatic society and was a prominent member of the dramatic society in the city, but his colleagues thought him "a bit too assertive in his Socialist views" – which they assume had a hand in his disappearance. A lot of them assumed he simply was a Communist who had been "called behind the Iron Curtain" and he reputedly send a letter from Berlin. However, the disappearance of Alton ends with a gruesome discovery in a ditch by the side of the road.

The Case of the Amateur Actor is definitely different in tone and tenor from the earlier, baroque-style, novels from the 1930s and impressed me as a concession by Bush to the changing landscape of the genre during the post-WWII years.

First of all, there's the first-person narration by Travers recalling the hardboiled private eyes from the United States and, secondly, the murders here are seedier in nature than the grandiose crimes found in such earlier novels as The Perfect Murder Case (1929) and Cut Throat (1932). The execution of the murders here are simple and pretty ugly without any of the bells and whistles often associated with the Golden Age detective stories.

All of that being said, Bush did not appear to have compromised all that much on plot-complexity, because the multiple, apparently unrelated, murders are expertly tied together. Travers gradually gets a hold of the practically invisible thread linking all of the involved parties and this leads to a monumental discovery, nicely foreshadowed in the first part of the book, which hands him the tools needed to demolish a clever little alibi – an alibi that was perhaps too clever for its own good. A sizable portion of the problems that had faced Travers and Wharton came as a result of this alibi-trick. So it was a nice touch that the whole matter became plain as day once the alibi was cleared.

On a whole, I found The Case of the Amateur Actor a compelling and surprisingly well done departure from the earlier books in the series. The plot may lack the density of such (baroque) titles as Dancing Death (1931) and The Case of the April Fools (1933), but not their intricacies or its deft handling of the complected cases ploy. So that makes me very curious about other late titles, like The Case of the Counterfeit Colonel (1952) and The Case of the Flowery Corpse (1956), but the next Bush on my pile is the very early Dead Man Twice (1930). A book that had been recommended to me numerous of times. So you can expect a review of that one in January of 2018.

Sorry of this post came across as a little hurried, but had to crank this one out under time constraint. Anyway, there will be one more review before this year draws to an end and, hopefully, it will end 2017 on a high-note. So you'll be expected back here later this week!
Geplaatst door TomCat on 12/27/2017