The Adventure of the Scarlet Blaze

"The one who gets the last laugh isn't the criminal, but the little guy with the big brain."
- Hattori Heiji (a.k.a. Harley Hartwell) 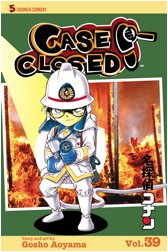 Ever since I began participating in the online mystery community, I triumphantly lured over a dozen fellow enthusiasts into reading Kelley Roos' The Frightened Stiff (1942) and John Sladek's Black Aura (1974) and unintentionally resurged an interest in the obscure, hard-to-get books by Anthony Wynne – who stands as one of the most fertile writers of impossible crime stories. But try as I might, I just can't seem to generate even half as much attention or buzz for Case Closed / Detective Conan as I did for an unremembered writer whose books have been out-of-print for nearly seven decades – even with the backing from Ho-Ling and Patrick. This makes me wonder if the lack of overlap, between readers of Conan and Golden Age Detectives, isn't due to mis-advertisement but simply an unbridgeable age and cultural gap. I mean, here we have a detective series that literarily has everything one hopes to finds in well-written, tightly plotted and fairly clued mysteries, ranging from classic locked room mysteries to character-driven suspense stories, but, for some reason or other, older readers seem to be unable to warm up to it.
I hope this is an misunderstanding on my part, but whatever the answer may be, we will continue to proselytize, indoctrinate and incorporate new members into the Cult of Conania, and here's my latest contribution:
Blazing Horses and a Glowing Firebug
The first murder case of this volume covers just about half of the book, and has Conan and Harley hot on the trail of a serial arsonist – whose modus operandi varies case by case but are signed with the incendiaries unmistakable trademark signature: leaving a small statuette of a red blazing horse at the scene of each inferno. At heart, this is a blazing eulogy to the memory of Agatha Christie, which adeptly avoid the familiar pitfall filled with tired old clichés and misconceptions, but it's also a solid detective story in its own right. And it's always a pleasure to watch Conan and Harley team-up.
Murder Among Friends
Professor Agasa chaperons another outdoors excursion for Conan and his buddies from The Detective Boys, when they bump into a group of friends from a college club touring around in a campervan and not unexpectedly one of them turns up dead after briefly disappearing from the party. On the surface, it has all the earmarks of an unfortunate accident, but a bike in perfect working order, tire tracks and a bloody picnic blanket are the silent witnesses that scream out foul play. The gist of the trick is easily deduced, but the clueing and use of the outside environment makes this a satisfying detective story.
The Mother Hunt
In the final story of this collection, Richard Moore is employed by a well-known child actor who was abandoned by his mother when he was only a baby, however, recently he has been receiving a slew of postcards which were evidently send by his mother – and he wants the famous Sleeping Moore to locate her. However, it's Conan who does a top-notch job at deducing her whereabouts from the tell-tale clues on the postcards. As a matter of course, their mother hunt turns into a murder investigation and they have to deduce who of three women strangled a freelance, hack mudracker – and who of them is the boys mother. Not one of the best stories in the series, but it has nifty visual clue that I really liked. The deadliness of the murder weapon is questionably, though.
Geplaatst door TomCat on 7/29/2011