"But no matter how I tried
The other side was locked so tight
That door, it wouldn't open."
- Gotta Knock a Little Harder

Back in September of last year, Curt Evans wrote a number of book reviews (here, here and here) on the rare and hard-to-get locked room novels by Anthony Wynne, the nom-de-plume of Scottish-born physician Robert McNair Wilson, who still stands as one of the most fertile writers of miracle problems. But in spite of fathering sixteen impossible crime novels, more than one-half of his entire output, he never accumulated the prestige and credit that was bestowed on John Dickson Carr, Hake Talbot and Clayton Rawson – or even that of lesser known writers such as Joseph Commings and Arthur Porges.
The impediment to acquiring ever-lasting fame, within the confines of the genre, was not due to a lack of imagination to deliver on resplendently conceived premises, but that he was depraved of even particle traces of humor and populated his stories with pasteboard characters who act like stage actors in a Victorian melodrama – prompting John Norris to aptly label them as "Detective Operas," in which an overwrought, melodramatic dénouement ends with the murderer promptly committing suicide after an aria of a confession.
But in defiance of these dire forebodings, I found myself unable to ignore a writer who turned out over a dozen locked room stories, occasionally packing a plot with more than one or two seemingly impossible situations, which reputedly are, at times, worthy of John Dickson Carr himself. I'll take a humorless, baroque style of writing, littered with two-dimensional characters, for granted if the exchange includes miracle problems of a Carrian quality – and I felt vindicated in that attitude after finishing The Green Knife (1932). 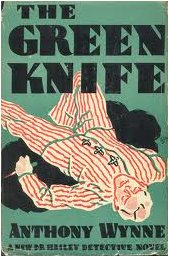 The flaws attributed to Wynne all give actes de présence in The Green Knife, but the murder of Sir Dyce Chalfont, an opulent power player on the financial scene, who "with the stroke of" a pen could "hand over a million men to despair and ruin," proved to be sufficiently baffling to distract your attention away from them – and the circumstances in which he died had me grasping at straws until the final page.
Here are the facts as they are known: witnesses that rushed to the bedroom door, after a disturbing scream, heard someone moving furniture around, to barricade the entrance, but when they managed to break-down the barrier the only occupant of the room was the body of the dead millionaire and the windows were securely bolted from the inside – creating an almost perfectly sealed area. But more importantly, the fatal stab wound inflicted on him precludes the possibility that he was attacked somewhere else in the house and fled into the bedroom to escape a murderous assailant – as he died within seconds after the blade ruptured his heart. I usually have a theory to offer as to how someone could've fled from an inescapable environment, but the best I could muster in this case was that the murderer curled himself up in a hidden compartment of the sofa that barricaded the door – an idea inspired by Edogawa Rampo's short horror story, "The Human Chair."

Fortunately, for my bloated, but fragile, ego, Dr. Eustace Hailey, who has a non-commending presence and a bland personality, was completely confounded, as well, especially when the servants start turning up dead under similar, apparently unfeasible, conditions – and every time they assume to have unlocked the door to one of the barricaded rooms, evidence from one of the other impossible murders breaks their theoretical key in several pieces and forces them to rethink their entire case all over again. The eventual solution is as clever as it is simple, a hallmark of a grand locked room trick, although you could draw a question mark or two in the column concerning the fair play aspect of it.
These engrossing puzzles and subsequent theorizing will occupy most of your attention, and therefore tend not to be bothered too much about the hammy writing or flat characters, but, to be honest, there was one excellent scene in the book that definitely benefited from the overwrought prose – which was when Dr. Eustace Hailey was locked-up in the darkened murder room with the killer, who was obliterating evidence from a previous murder, while the doctor was stumbling around in the dark and expecting any moment to feel a sliver of cold steel burying itself in his back.
However, at times, he was also sloppy where details are concerned and any editor worth his or her salt should've picked up on them. When Sir Dyce was discovered it was immediately pointed out that he was stabbed in the back but when they discuss a bizarre suicide/accident-combo they talked as if the titular knife entered through his chest – and when the first servant is murdered, under eerily similar circumstances, they talked about back stabbings again. Huh? There's another irregularity in the story, concerning the impossibility of the first murder, but I can't go into details without divulging the solution of the locked room trick.
The tragedy of Anthony Wynne is that he was, at heart, a writer who belonged to a different era and had the misfortune to arrive on the scene long after his time had come and gone. I'm convinced that had he published such a book as The Green Knife 30-40 years earlier he would've been placed alongside Edgar Allan Poe, Wilkie Collins, Conan Doyle, G.K. Chesterton and Gaston Leroux as one of the trail blazing pioneers of the genre – instead of being perceived as a curiosity.
It's a shame, since you really have to admire someone who was able to saturate a story with impossible situations and false solutions, but I am afraid that less dedicated readers will find themselves bogged down by the overwrought writing and a deficiency of characterization, not to mention the scarcity and price-tags attached to most of the books, making this more a series for hopeless devotees of the locked room story and zealous collectors of hard cover editions than for regular mystery readers.
Yes, I'm one of those incurable aficionados of the impossible crime story, which means that you can look forward to more reviews of books by this obscure and forgotten author in the not so distant future – even if it means burgling the private libraries of John and Curt! Wait, did I just type that out-loud?
Geplaatst door TomCat on 7/17/2011