"A picture says more than a thousand words."

While browsing through my files, I came across the following snapshot – depicting ten core members from the early days of the Mystery Writers of America who were evidently hard at work and strenuously taxing their mental dexterity. You have to love the fact that Pat McGerr, who was known for fooling around with unidentified bodies, completely immerged herself in the role of corpse in this picture. What dedication! ;-) 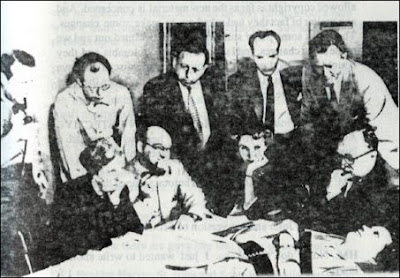 The Gang: Georges Simenon, Anthony Boucher, Lawrence Blochman, Harold Q. Masur, Burke Wilkenson, Dorothy Cameron Disney, Fred Dannay, Leslie Ford, Manfred Lee and Pat McGerr.
Update: I was searching for a website to attach to Burke Wilkenson's name when I found the place I originally snatched this picture from, but I still haven't the faintest idea who he was or what he did.
Geplaatst door TomCat on 7/07/2011