Ellery Queen: Long May They Reign

"The whole world is a tragedy of errors..."
- Ellery Queen 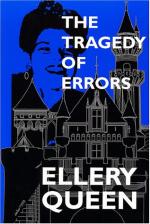