What Mysteries Lie Under the Rising Sun?

Note: this will hopefully proof to be the first entry of a continues, but irregular, series of guest posts by fellow connoisseurs of crime – and I'm thrilled to announce that the first person to pick up the pen is Ho-Ling. I already heaped a considerable amount of praise on his superb blog, which he waved away dismissively, but I really meant when I said that I consider his blog to be one of the best of the online mystery community! It's pretty much the only spot on the web where Western fans can marvel at a part of the mystery genre that is, due to that darn language barrier, still uncharted territory – and with Ho-Ling acting as guide the only disappoint you'll likely meet along the way is the inability to read most of these gems he so expertly discusses. That's why I want to urge the notable readers of this blog (you know who you are!) to pass a link to his blog and this article along to editors and publishers who might be interested in publishing these grand detective stories that have been out of the reach of Western readers for far, far too long!

What Mysteries Lie Under the Rising Sun?
Write something on Japanese detective fiction as a guest blog? Shouldn't be too hard, I thought. I've reading them for some years now, so I should know a bit about the theme. Well, that was a foolish thought. Seeing the focus of Detection in Moonlight, I knew I could limit myself to Golden Age-style fiction. But when I saw that I was already nearing the 2000 words on the halfway point of my first draft, I knew the topic still was too broad. So then I decided on post-war Japanese Golden Age detective fiction. And then decided I should focus mostly on books that are actually available in English. And then I ignored TV-shows, comics and cartoons. 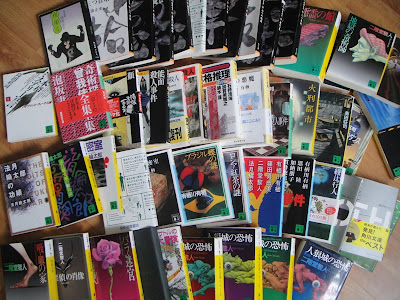 At this point I realized that that Japanese detective fiction is such a big topic! So much interesting works, so much to talk about! And just a tiny, tiny fraction of all of that reaches an English-reading audience. Sigh. It sometimes seem futile to rave about things you know few people will be able to read. But here I present mostly a selection of Japanese detective novels I can rave about that are actually available in English!
Post War Society: True Golden Age in Japan

Most critics see the end of the Second World War as a turning point in the history of Japanese detective fiction, as writers finally turned to pure Golden Age detective fiction. Yokomizo Seishi's Murder in the Old Daimyo's Inn (Honjin Satsujin Jiken) is generally seen as the definite start of the true Golden Age detective novel in Japan. What was so innovating about this 1946 novel is that it effectively set a Golden Age locked room murder mystery in a very Japanese, rural setting. The combination was a daring one, as one might imagine that almost every architectural structure in such a setting, from the way rooms are build to the whole house, is widely different from the Western setting. Yet Yokomizo succeeded brilliantly, evoking Carr with both the theme of the book, as well as having an uncanny knack for creating atmosphere with his writings. The protagonist, Kindaichi Kousuke, would grow out to be the iconic Japanese detective, with a silhouette as recognizable as Holmes.

The only Yokomizo novel available in English at the moment is The Inugami Clan, but it luckily has exactly those elements that made the Kindaichi novels so popular. A strange will from a wealthy family patriarch leads to bloody battle surrounding the inheritance, set in rural Japan. Yokomizo created fantastic memorable characters here and the story is ingeniously plotted (See also the trailer of a recent movie version). It is a shame no-one bothered with other translations of Yokomizo's works. Many of his books have been so influential on the genre that Japanese parodies on detectives still mostly refer to his books. And yes, the good way to measure influence on culture is by looking at parodies!
Takagi Akamitsu's The Tattoo Murder Case was published around five years after Murder in the Old Daimyo's Inn. Set in the underground world of tattoos, Takagi created one of the most famous locked room mysteries in Japan, with a murderer seemingly out to steal... tattoos. Tattoos are usually stuck to skin though, so if you want to steal a tattoo, you’re kinda forced to take a substantial part of the human body with you. Not for the weak of heart maybe, but the way Takagi manages to intertwine the tattoo world with his own fantastic puzzle is great and makes for a very pleasant read.
The New Orthodox Movement
Around the late 1980's a new wave in Japanese detective fiction started, dubbed the New Orthodox movement and it is exactly what the title suggests: a movement of authors that go back to the orthodox (= Golden Age) detective fiction. Who says Golden Age is dead? It's still very much alive in Japan, with new writers appearing every year, with locked room murders, alibi tricks, disappearing objects, Challenge to the Readers and everything good and nice still being written. The stories are usually set in the modern day world, but these talented modern Japanese writers show that there is still a need for a great detective in this time and age. Most of these writers are very much inspired by the Great Olds and many of the stories feature meta-fictional dialogues on famous detective writers, about tricks and simply the things we fans talk about in real life. These books are both New Orthodox as well as a tribute to the Old Orthodox.

The biggest name of this movement is Shimada Souji, who debuted in '81 with the simply amazing The Tokyo Zodiac Murder Case. With themes like locked room murders, functional dismemberment, a homunculus and a Challenge to the Reader, Shimada delivered a tour-de-force capable of challenging any of the Great Old Classics. He followed the book up with The Crime at the Slanted Mansion (Naname Yashiki no Hanzai) the following year, where he showed once again that the genre was far from dead. Well, Shimada didn't actually attract that much attention of the audience at that time. But he did attract the attention of other like-minded people, who started to send their manuscripts to him. Many of them grew out to be big names in the genre themselves, while Shimada's own popularity also grew with time.
Ayatsuji Yukito, one of Shimada's protégés, published The Murder at the Decagon House (Jukkakan no Satsujin) almost a decade after Shimada's debut and it was this book that effectively started the New Orthodox movement (not available in English). This Giant in the Japanese detective fiction tells an And Then There Were None-esque story about a group of mystery novel fans, who all go by a nickname that refers to famous detective writers, who get murdered one by one on an island. With the publication of this novel, the New Orthodox movement really started to catch momentum, with other writers following and an interest in Golden Age-style fiction being resurrected.
Many writers in this movement seem to be influenced especially by Ellery Queen. Both Arisugawa Alice and Norizuki Rintarou write about writer-detectives with the same name as themselves. Both writers usually set their stories in rather urban areas and often insert Challenge to the Readers in their stories. Norizuki Rintarou even mirrors the Ellery/Inspector Queen relation with his own Rintarou/Inspector Norizuki characters. His award-winning short story "An Urban Legend Puzzle" is an excellent example of how Golden Age detectives still work in this time and age. A carefully structured short story, evoking the old Queen-tradition with its emphasis on logical arguments, set with a wonderfully modern theme of the urban legends. It is a shame none of his other short stories have been translated yet. Heck, Arisugawa isn't available in English at all! Arisugawa often uses Alice in Wonderland imagery in his stories (like Queen) and his short stories remind of Queen's Puzzle Club stories, with small, limited puzzles like dying messages or enigmatic behavior that depend on the right interpretation. Arisugawa also specializes in secondary literature on locked room mysteries, having written works like An Illustrated Guide to the Locked Room 1891-1998.
Nikaidou Reito is hailed as the Japanese Carr (he prefers the moniker Japanese Paul Halter himself actually), a writer who specializes in impossible crime situations. Like Arisugawa, he is a prominent writer in the New Orthodox movement who strangely enough isn't avaibable in English at all. His Terror of Werewolf Castle (Jinroujou no Kyoufu) is a gigantic work, the worlds' longest detective story (at the time of publication), with several locked room murders and other impossible crime situations spread across four volumes (not available in English). He's also prolific as a critic of the genre, and has even delved into pastiches of Arsène Lupin and Sir Henry Merrivale. Like Paul Halter, he seems to have trouble finding the English audience though.
You know, I'm just going to stop here. I could go on and on about pre-war detective fiction, about TV-shows, about New Orthodox writers, about themes in Japanese detectives, about…. everything. It's just too much. I just hope that this short introduction to Golden Age-style detectives has piqued the interest of some readers here. Take a look at what is available in English and maybe you'll see that I'm not totally crazy for studying Japanese in order to read these hidden treasures!
Translations in English (mentioned):
Norizuki Rintarou. "An Urban Legend Puzzle." In Passport to Crime (ed. Janet Hutchings). Carroll & Graf
Shimada Souji. The Tokyo Zodiac Murders. IBC Publishing
Takagi Akimitsu. The Tattoo Murder Case. Soho Press
Yokomizo Seishi. The Inugami Clan. Stone Bridge Press
Other Japanese detective fiction in English (not a complete list):