"Just as an octopus may have his den in some ocean cave, and come floating out a silent image of horror to attack a swimmer, so I picture such a spirit lurking in the dark of the house which he curses by his presence, and ready to float out upon all whom he can injure."
- Rev. Charles Mason (Sir Arthur Conan Doyle's The Land of Mist, 1926)

A staple of today's historical crime genre is transplanting the influential figures from our history books to the fictional realm of the detective story and plant the proverbial deerstalker on their heads. Aristotle, William Shakespeare and Leonardo da Vinci have all assumed the role of detective, but the most popular historical characters for this purpose appear to be Sir Arthur Conan Doyle and Harry Houdini – who appeared (together) in numerous historical mystery novels. 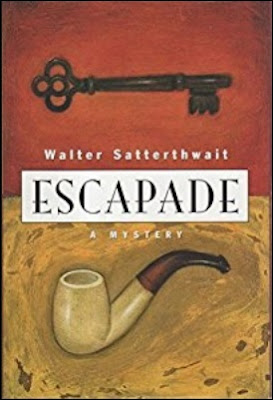 Conan Doyle most well-known appearance as a fictional-character was as the Dr. Watson to Dr. Joseph Bell's Sherlock Holmes in the Murder Room TV-series created by David Pirie. There were also three novels, The Patient's Eye (2001), The Night Calls (2002) and The Dark Water (2004), based on the TV series. Doyle made further appearances, as a detective, in a short-lived series by Mark Frost and teamed up with Lewis Carroll in four books written by Roberta Rogow.

Houdini looks to have been more in demand as a character than his friend and rival, Doyle, because he made countless appearances in fiction, but the most notable ones are three locked room novels, The Dime Museum Murders (1999), The Floating Lady Murder (2000) and The Houdini Specter (2001), penned by Daniel Stashower – known perhaps better for his award-winning Teller of Tales: The Life of Arthur Conan Doyle (1999). Stashower also made Houdini appear alongside Sherlock Holmes in The Adventure of the Ectoplasmic Man (1985).

And on at least one occasion, Conan Doyle and The Great Houdini appeared alongside each other on the pages of the same detective novel.

Walter Satterthwait's Escapade (1995) is the first of three novels about his Pinkerton operative, Phil Beaumont, who comes across as an homage to the hardboiled detective and his task in on his first recorded outing is to protect the famous artist, Harry Houdini – who he always refers to as "The Great Man." Houdini is stalked and threatened by a music hall magician and master of disguise, "Chin Soo." A shadowy enemy who appears to have followed him all the way to Devon, England, where Houdini is expected to attend a seance at a historical manor house.

Maplewhite is the ancestral home of the Earl of Axminster, an elderly, bed-ridden man, who has temper tantrums and, while he screams, starts "throwing things about his room." The reason for these outbursts is that he can't flog his own son, Lord Robert Purleigh.

Lord Bob, as he liked to be known, is an aristocratic Bolshevist and plans to open Maplewhite to "the toiling masses" when he inherits the title and estate, which displeases the old Earl immensely and soured the relationship between the two – as his son vows that "the swine" will be "the first to go" when the revolution comes. Wedged between father and son is Lord Bob's wife, Lady Purleigh, "a lovely woman" with "a natural, effortless kindness and grace" and their dazzling daughter, the Honorable Cecily Fitzwilliam. And the group of people they invited to stay the weekend makes it very clear that Escapade is one of those typical, modern re-imaginations of the traditional country house mysteries of yore. 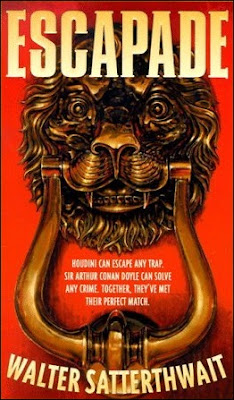 The first of the invitees are Lady Purleigh's fat cousin, Mrs. Marjorie Allardyce, who's being accompanied by her paid companion, Jane Turner. She has two frightful encounters with the ghosts haunting the manor house and the vast grounds surrounding the estate.

Secondly, there's Dr. Erik Auerbach, the Viennese psychoanalyst, who freely lectures on Dr. Freud's Oedipus complex in the drawing room, which shocks and revolt Houdini to the point that he has to withdraw for a lie-down. Sir David Merridale, a wise-crack, took the conversation (and everything else) on a less serious note, but he was neither "so witty nor so handsome as he believes" and the "extremely charming" Mrs. Venessa Corneille finds him to be "a dreadful man." Lastly, there's Madame Sosostris, the renowned European medium, who's there to make contact with "the ghost of Maplewhite," Lord Reginald. A distant ancestor of the Earl and Lord Bob.

She's also the reason why Harry Houdini and Conan Doyle are present. Doyle is present as a believer and ally to spiritualism, while Houdini has vowed to expose every trick Madame Sosostris is bringing to the seance table – which sadly remained an under played aspect of the plot and overall story. But, as you probably gathered from this roll call, the book is more of a detective parody than a proper historical mystery novel. The story takes place in August, 1921, but the only aspect that places the book within that period of time are Lord Bob's references to the toiling masses.

There were, however, enough fascinating plot-threads that initially held my attention. On their first night, Turner has a ghostly bedside visitation and later encounters a pair of ghosts, of a woman and a small boy, at the ruins of an old mill house, which is followed by a rifle shot that was fired from the edge of the woods – narrowly missing the Great Man! So did his nemesis manage to find him? These events culminate with the death of the Earl, shot to death, behind the locked and barred door of his bedroom.

The murder occurred towards the end of the first half of the book, but had high hopes for the second half and the locked room angle when Houdini immediately provided a false solution. A solution that involved lock picking and manipulating the bar with "a strong piece of wire." Sure, the explanation was routine, as far as these locked room murders are concerned, but it was only to demonstrate that a murderer could have left a locked crime-scene behind. So I began to hope that the eventual solution would be something clever or even original, but Satterthwait pulled one of the oldest, time-worn solutions from his moth-eaten bag of tricks. And after that, my interest rapidly began to wane. 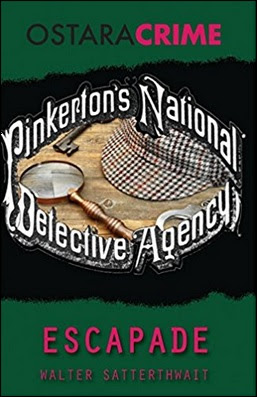 I'll grand you that the story was not an unreadable one. On the contrary, I quite liked the hardboiled character of Phil Beaumont and the portrayal of the slightly hubristic, but kind, Houdini. Doyle did not have big part to play in the story, but was glad he was included. Hey, who doesn't like Doyle? And there were moments when the author showed he possessed plot-awareness. Such as the clue of Turner's nearsightedness, when she saw the ghosts at the mill house, and how that related to the first shooting incident. A writer, like John Dickson Carr, could have spun quite a ripping yarn out of that single plot-thread.

I also have to admit that the secret behind the ghost at the manor house and how that haunting resulted in murder was not entirely without interest, but the answer obviously revealed the hand of a modern writer. However, all of these points of interest were lost on the larger canvas of the story.

I'm sure readers of contemporary crime novels will be delighted by this modern take on the classic country house mystery, but actual readers of the classic detective story will not be overly impressed with the end result of Escapade. A spirited and well-meant attempt to imitate the greats of yesteryear, but not a classic in its own right. You can almost entirely blame that on the plot not living up to its own potential.

Well, just like last year, this year of blogging ends with a badly written, piss-poor review of a disappointing read, but I'll trick to pick something good to kick-off the New Year with. So I'll end this letdown of a blog-post and wish you all the best in the coming year. I hope to see you all back in 2018!
Geplaatst door TomCat on 12/31/2017