A month ago, I reviewed The Night of Fear (1931) by "Moray Dalton," a pseudonym of Katherine M. Renoir, who was an all but forgotten author of twenty-nine "finely polished" mystery novels until Dean Street Press reissued five of them back in March – complete with an introduction by the Dean of Classic Crime Fiction, Curt Evans. The Night of Fear proved to be a huge improvement on the generously praised The Strange Case of the Harriet Hale (1936) and decided to move the second title that was recommended to me to the top of the pile. 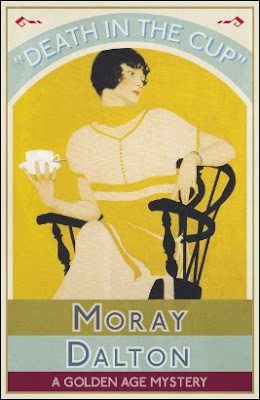 Death in the Cup (1932) is the last of three novels about Dalton's private inquiry agent, Hermann Glide, who reminded Evans of the enigmatic Mr. Gody. A minor recurring character who was introduced by Agatha Christie in The Mystery of the Blue Train (1928) and appeared in three additional Hercule Poirot novels.

Only difference between Mr. Gody and Mr. Glide is that the latter reaches the end of a case without being upstaged by a bloody little Belgian!

Death in the Cup is, like her other work, a character-driven mystery in which the desires, emotions and personalities of the people involved propel the plot and how they acted on them here had dire consequences – complicating the case before it eventually helped Glide solve two murders. A story that begins with the woes of "a professional gigolo."

Mark Armour left his home as an eighteen-year-old when he forged his father's name on a cheque and joined the army when the Great War broke out a few weeks later. When he returned, the handsome Armour began "cadging around" by "making love to silly old women" and hauling them across a dance floor, but a broken leg left him with a permanent limp. And a meager three-half pence in his pocket. So he's forced to stay with his genteel, but scandal-ridden, highly dysfunctional and isolated, relatives in the provencial town of Dennyford. A madhouse household that strongly reminded of the family in Arthur W. Upfield's Venom House (1952).

They live on the outskirts of the town, in the White House, but their chequered past keeps "the family outside the social pale" of the community and were avoided as much as humanly possible.

The roost is ruled by Mark's belligerent, domineering half-sister, Bertha, who's "given to finding fault" and everyone hated her ("nag, nag, nag, all day long"). Winnie is their odd, soft-minded (half) sister and deeply in love with a young doctor, Ian Cardew. She moons all day outside the poor doctor's practice, rings his bell, writes embarrassing love letters and pushes flowers through his letter box. George is the half-witted brother of the family and spends his days cutting pictures out of magazines and pasting them into albums. A character very similar to the mentally arrested Morris Answerth from Upfield's Venom House. Their youngest sister, Claire, is free of the family "taint of insanity" and she had endured them for years, but recently, she has fallen in love with gardener, Richard Lee – which would not have been accepted by Bertha. She not the only one in the household carrying on affair behind the back of the family matriarch. Miss Lucy Rivers is the daughter of Colonel Rivers, a local magistrate, who would certainly disapprove of her relationship with Mark Armour. A disreputable member of the local outcasts and a financial dependent of Bertha. Who would also disapprove of the relationship. 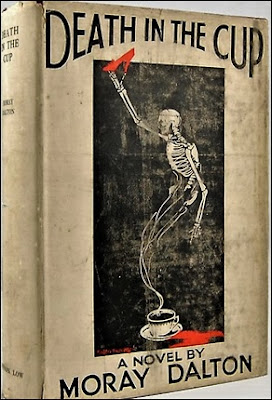 This concentration of clashing personalities, hidden-or unanswered passions, financial dependency and mental illness proved to be a volatile cocktail with disastrous results. Someone spiked the glass of milk on Bertha's bedside table with "a thundering big dose" of arsenic. She died the next day and Mark becomes the police's primary suspect.

The series-detective of fifteen of Dalton's mystery novels, Inspector Hugh Collier of Scotland Yard, is only mentioned by name and the case is officially handled by Superintendent Brisling, but Lucy's uncle and confident, Geoffrey Raynham, interferes in the investigation on her behalf – until he calls in that wizened inquiry agent, Hermann Glide. Glide appears on the scene, fumbling his lump of modeling wax, but a second death with the features of an accident, natural causes and murder takes the focus off Mark. And redirects the attention of the police to another set of suspects in the Armour household.

I thought this plot-thread was a well-done and original divergence from the customary second murder often used to liven up, or muddle the waters, of the story.

Sadly, the murderer is easily spotted and, initially, rejected this possibility as too obvious and began to suspect another character who had a similar kind of motive, but my first impression turned out to be the correct one. However, this is the only blemish on an otherwise excellently written mystery novel with strong characterization. Death in the Cup is not merely a grotesque portrait of a family of dysfunctional gargoyles, but showed, for better or worse, their humanity.

There are also a number of good, kindhearted characters who try to help the people in the story who find themselves stuck between a rock and a hard place. Such as Lucy's concerned uncle and the kindly Mrs. Trant. You can't but feel sorry when something bad happens to them. Mrs. Trant is carried out of the story on a stretcher with a broken leg and the consequences of the police investigation forces the family to place George with a specialized doctor, which he does bravely, but tears were in his round, childlike eyes – which was a little depressing. George was the only person living in the White House who was completely blameless, but suffered the consequences.

So, all in all, Death in the Cup is not as strong as a pure detective story as The Night of Fear, but the book stands as a fine example of the sophisticated, character-oriented mystery novels commonly associated with the literary-minded Queens of Crime. I think readers who especially appreciate the old Crime Queens, like Margery Allingham, Ngaio Marsh and Dorothy L. Sayers, will find in Dalton a legitimate claimant to one of their crowns.
Geplaatst door TomCat on 10/08/2019