Dr. W. Stanley Sykes was an eminent anesthesiologist from Morley, Berkshire, England, who wrote extensively on medical subjects and dedicated the final years of his life working on his magnum opus, Essays on the First Hundred Years of Anaesthesia – a three-volume series completed posthumously in 1982. More than twenty years after Sykes passed away in 1961. 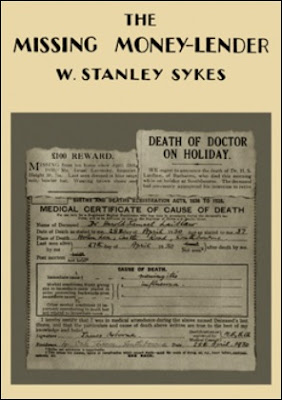 During the early 1930s, Sykes turned his logical mind to the detective story and produced two scientific mystery novels in the tradition of R. Austin Freeman, The Missing Moneylender (1931) and The Harness of Death (1932). A third novel, The Ray of Doom (1935), is a science-fiction mystery in which "the eponymous ray is presented with some scientific rigor." Sykes' demonstrated in his first detective novel his ability to turn hard science into fiction, but in The Missing Moneylender, he used it to create "an almost undetectable method of murder."

The Missing Moneylender was bluntly re-titled in the U.S. to The Man Who Was Dead and this obscure, long-forgotten book was brought to my attention when "D for Doom," of Vintage Pop Fiction, reviewed it in 2017 – calling it "a marvel of intricate and ingenious plotting" with "exasperatingly, inexplicable crimes." You can almost call them impossible crimes!

This peculiar crime story begins with an interesting conversation between Dr. James Osborne and a friend, George Woods, who discuss such topics as public executioners, professionally trading places and one of the doctor's pesky patients, Israel Levinsky. A moneylender who hasn't paid a penny yet of the forty pounds in unpaid doctor's bills. Dr. Osborne lets Woods read a strongly-worded letter he drafted, in which he tells Levinsky that he can't expect medical care at "the price of unskilled labour," but is called away to the sickbed of a convalescing colleague, Dr. Harold Laidlaw. Dr. Osborne diagnosis him with meningitis and the situation, while seriously, looked not entirely hopeless. He died less than two days later.

I think this opening showed Sykes was clearly influenced by Freeman's Dr. John Thorndyke stories, but the second puzzle-piece of the plot fitted snugly in the early police procedural-style detective novels of Freeman Wills Crofts.

Isreal Levinsky is a creature of habit who has made "a fetish of punctuality" and has never been known "to be late or away from the office without due notice," which causes his clerk, Mr. Rosenbaum, to worry when Levinsky was absent without a notice – something unprecedented in his thirty-year tenure with the company. Rosembeam learns from Levinsky's maid that his bed has not been slept in and his breakfast was left untouched. So he called in the police.

Initially, the case is handled by Inspector Ridley, of the Southbourne Constabulary, but the Chief Constable applied to Scotland Yard for assistance. Conveniently, Scotland Yard dispatches a friend of Ridley, Inspector Dennis Drury, and together they methodically sift through the evidence and, unexpectedly, come across a link between the missing moneylender and the dead doctor. Even more surprisingly, Drury engineers an impossible situation in order to extract the contents of a sealed envelope without opening it! An admittedly minuscule, but interesting, aspect of the plot, because you rarely (if ever) see a detective employing one of these impossible crime-tricks to further their investigation. 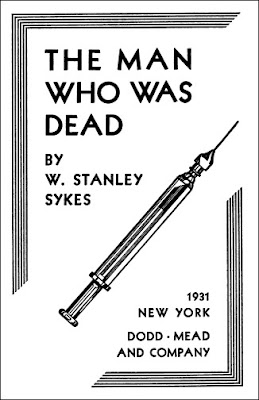 The evidence they have to go over consists of such clues as fragments of a spectacle lens, pieces of a medical syringe, paraffin wax, a fingerprint, a missing address book and the astounding discovery of a police sergeant – which leads to an exhumation and the discovery of, what still is, "an undetectable murder." One that might be impossible to prove in court, because the pathologist, Sir James Martin, has to admit at the inquest that he has "no idea" what killed the victim. There are no marks of violence anywhere. No signs of disease or any traces of poisons.

I don't know if there are any quasi-impossible crimes or locked room puzzles in The Harness of Death, but Sykes was definitely experimenting with them in 1931. There's the sealed envelope-trick and inexplicable death in The Missing Moneylender, but Robert Adey's Locked Room Murders (1991) also lists two short stories, "How Was the Knife Thrown?" and "The Locked Room," which were published in Hush in early 1931. So I'll have to look into those two stories sometime in the future.

Unfortunately, the second half of the story is very tricky to discuss without giving anything away, because the plot becomes a semi-inverted mystery with the police-detectives, assisted by Sir James, trying to figure out how the murder was committed – edging the story a little closer to the more intuitive detective tales. They're theorizing more and the ingenious solution was even complimented by a clever, nicely done false solution. One that made the murder look like "an absolutely insoluble problem" when it was scientifically disproven!

So the first and second halves of The Missing Moneylender differ noticeably in tone and approach to the problem. If the first half betrayed the influence of Crofts and Freeman, the second half can be entered as evidence that Sykes had read and greatly admired Dorothy L. Sayers' Unnatural Death (1927). Sykes was certainly guilty, to some degree, of imitating either his personal favorites or simply what had come before him. Something not uncommon in the early works of Golden Age mystery writers (e.g. Brian Flynn's The Billiard-Room Mystery, 1927), but Sykes brought such a clever and original idea to the table that you can easily overlooked that beginners mistake. I think I liked it even more than the solution from Unnatural Death!

D mentioned in his review that the method the murderer used appeared to be a little out-of-time, but apparently, this was all brand spanking new in 1931. Demonstrating, once again, that the advance of knowledge and technology only provides new possibilities, not obstacles, to a talented plotter with imagination.

So, purely as a good, old-fashioned how-was-it-done, The Missing Moneylender comes highly recommended with an ultimately simple plot that appeared to be an inescapable labyrinth. That being said, not every reader today is going to appreciate Sykes' characterization or his condescending "social smugness," which undoubtedly will rub most of you the wrong way. The reader has been warned!
Geplaatst door TomCat on 10/19/2019