This month, Dean Street Press is finally reissuing the first ten Anthony Bathurst by an unsung Golden Age mystery writer, Brian Flynn, who was all but forgotten until the Puzzle Doctor, of In Search of the Classic Mystery Novel, began raving about Flynn in 2017 and pestering DSP with requests to bring Flynn back into print – a strategy which has now borne fruit. I was even enticed to "sample" the series ahead of the reprints with The Billiard-Room Mystery (1927) and The Murders Near Mapleton (1929). 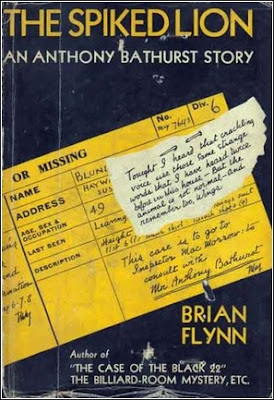 The Spiked Lion (1933) is the thirteenth title in the series and the first chapter immediately comes to business with Sir Austin Kemble, Commissioner of Police at Scotland Yard, who consults Anthony Bathurst on an extraordinary case. John Pender Blundell was a comparatively well-to-do man with a "particular penchant" for ciphers and cryptograms, on which he wrote two books and worked for the Intelligence department during the Great War. A fortnight ago, Blundell disappeared from his home and was found two weeks later in Bushy Park, "dead as a doornail," with a fractured skull, broken bones and "a peculiar jagged slash" down his right cheek – which were non-fatal injuries. So what did kill him? A whiff of cyanide of potassium sprayed up his nostrils!

A creased fragment of notepaper with faint, incomplete writing is found in Blundell's pocket. The writing that's legible speaks of a "crackling voice" and a spiked animal.

Bathurst plays the role of armchair detective in this nicely done set piece as he "extracted just the germ of an idea" without ever leaving Sir Austin's office. This leads to the discovery of a second victim on the list of missing persons, Hubert Athelstan Wingfield, who was a recognized authority on legendary inscriptions (Heraldry), but one day, he vanished without a trace. A month later, the bruised and broken body of Wingfield is found in the Valley of Ferns, but the cause of death is cyanide of potassium sprayed, in some way, up the nostrils! And this is still only the beginning of the case.

Chief-Inspector MacMorran had a lengthy interview with Blundell's nephew, Hugh Guest, who was granted an extended leave from Oxford and stays with Sir Richard and Lady Ingle at Beech Knoll, on the Isle of Wight, where the usual group of house guests have gathered – as dark, treacherous intrigues are afoot. The people at Beech Knoll are the aforementioned hosts and the daughter of the house, Ella. Hugh and his sister, Celia. Barry Covington who warned Hugh something strange was going on that involved him. Finally, there's a friend of the host, Slingsby Raphael, who wrote many books dealing with "the mysticism and occultism of the East."

Hugh Guest is murdered behind the locked door of his bedroom with the only key found inside his breast pocket and "a cat couldn't have got away from that window-ledge."

So "the fatal circle" in the relationship between the first and last victim makes Bathurst decide to focus his attention on the Isle of Wight, which is when the story becomes an intricate play on the Tichborne claimants. Sir Richard was set to inherit a title and Tresham Castle when the elderly Lord Tresham passed away, but his long-lost, presumed dead, black sheep son, Nicholas, turns up out of nowhere to claim his inheritance. Nicholas has cast-iron evidence to back up his claim: a birth certificate, documents, genetic traits and "a set of rectangular mother-of-pearl counters" gifted to the family by Pope Adrian IV. So how is this new development connected to the three bizarre poisonings? 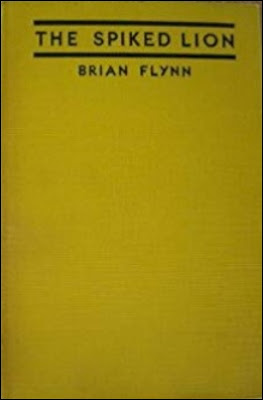 Early in the story, I noticed something that gave part of the game away and feared this was going to be a lukewarm review, but slipped on, what may have been, a red herring placing my focus on the wrong person – allowing a (more) complete picture of what happened to elude me longer than normally. Nevertheless, I figured out the locked room-trick (very easy) and why two of the victims were a mass of bruises and broken bones. And for that, I'll pad myself on the shoulder.

So you can easily collect all of the puzzle pieces, but putting them together requires a little bit more work (especially if you missed one) resulting in a largely satisfying detective story.

Just like in the previous two novels, Bathurst is merely here to play the role Great Detective, but a pleasantly active one, who travels all over the map to visit the crime scenes and talk with suspects, relatives and suspects to mine for clues and information. I particularly liked his one-man brainstorming session in which he tried to find a common link between all of the victims. His conclusion has him scrambling to Sir Austin with a request to exhume the bodies! Coincidentally, their discovery gives The Spiked Lion something in common with my previous read, Akimitsu Takagi's Shisei satsujin jiken (The Tattoo Murder Case, 1948). Something you don't often see in the detective novels from this period.

What struck me the most is how different The Spiked Lion compared to the other two I read. The Billiard-Room Mystery is a very conservative, but above average, 1920s country house mystery, while The Murders Near Mapleton is classic Christmas mystery, but The Spiked Lion had a pulp-style plot presented as a straightforward detective story. The explanation to the wounds on the bodies is a good example of something you would expect to find in the pulps. In a way, I was reminded of similar, pulp-style detective novels like Herman Landon's The Back-Seat Murder (1931), Philip Wylie's Five Fatal Words (1932), Gerald Verner's Terror Tower (1935) and John Russell Fearn in general, but Flynn had a much tighter grip on the various plot-threads – even if he glossed over some important details in the end. Such as how the murderer exactly entered the bedroom and the murder method.

On a whole, The Spiked Lion is not a pitch-perfect detective novel, but had a good plot that strayed a little from the beaten path and, more importantly, I enjoyed my time with it. So, if you thought Puzzle Doctor was bad with his constant Flynn reviews, just you wait until the reprints are finally released, because I'm really starting to like Flynn. A man who simply wanted to write good and entertaining detective stories is a man after my own heart!
Geplaatst door TomCat on 10/02/2019