Matt Ingwalson is an award-winning, independent author whose "desert noir" novel, Sin Walks into the Desert (2015), was named Best Indie Book of 2015, but what brought him to my attention was a blog-post by "JJ," of The Invisible Event, who briefly discussed two of Ingwalson's "Owl and Raccoon" novellas – a police procedural series focused on impossible disappearances! So it was finally time to give these "tightly architected mysteries" a shot. 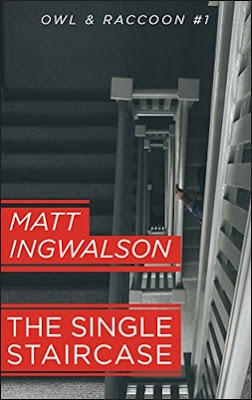 Detectives Drazen and Boska earned their nicknames during their time with the local SWAT team: Drazen is a smart guy who "knew people upside down" and got nicknamed "Owl," while Boska is "sneaky and fast" like a raccoon. And these names stuck with them when they became Missing Persons detectives.

"The Single Staircase" has a deceptively simple premise. David and Daphne Grey put there three-month-old baby, Sophia, to bed in the nursery on the third-floor of their condo. All of the windows on the third-floor were locked from the inside and the single staircase "landed right in the family room," where the Greys were watching a movie, but after the movie ended, Daphne went to the nursery – only to find an empty crib. They searched the house for over an hour, but a three-month-old can't get very far on foot or "plot out a game of hide and seek." So they call in the police.

Owl and Raccoon have two impossibilities to explore. Firstly, the parents are speaking the truth and someone, somehow, found a way to take a baby from a locked and watched nursery on the third-floor. Secondly, the parents are lying and either had a hand in the death of their child or have hidden the body. A pretty messed up puzzle either way you look at it.

A number of possibilities arise from these two scenarios and they're thoroughly explored, which gave me the opportunity to come up with my own solution. Naturally, it turned out to be incorrect. However, the clues appeared to be there.

My incorrect solution was based on descriptions of the family room, on the second-floor, which was described as "too small" with a 15 feet couch and a flatscreen TV "mounted on the wall right up against the stairs" – while the first-floor only had a desk, laptop and some bookcases. A second clue (to me) was when David and Daphne were found sound asleep in the waiting room of the police station. One of the detectives even asks, "do people about to be accused of their missing child's murder fall asleep in police stations?" What if they were physically exhausted from moving two rooms around?

So, based on these poorly interpreted facts, I figured the body had been hidden behind the now invisible door of the cupboard under the stairs. The door was made invisible, physically and psychologically, by papering it over and moving the family room from the first to the second-floor, because a TV had to be mounted to the spot to psychologically mask that there used to be a cupboard door there. I was even convinced Chapter 17 was a big hint that confirmed my theory.

I still liked my false solution, but it would probably disqualify "The Single Staircase" as a proper locked room mystery. However, the actual solution makes the story hang on to that status by a very thin thread. I can see why and how it still qualifies as an impossible crime story, but it surely is highly unconventional. And that would be an apt description for the story as a whole.

Ingwalson took an unconventional and minimalist route with very short, snappy chapters and dialogue. Very little characterization in spite of the inner monologues and an epilogue preceding the final chapter. Structurally, I was bizarrely reminded of R.H.W Dillard's The Book of Changes (1974), but, plot-wise, is actually consistent with a laser-focus on the central puzzle and an unusual, but good, solution that has a motive rarely found in Golden Age mysteries – making it a notable title in the fascinating list of 21st century impossible crime fiction. Even if the who-and why turned out to be more interesting than the how.

So I'll definitely return to this series in the future, but, for my next read, I'll be tackling a more conventional detective novel from the 1930s.
Geplaatst door TomCat on 10/21/2019