The Fort Terror Murders (1931) served as my introduction to both the pulpy, spy-tinged crime fiction of Francis van Wyck Mason and an exceedingly rare, well hidden subcategory of the locked room and military mystery novel – set in lonely, desolate army posts and fortresses. Since then, I've found two more novels that belong to this very specific subcategory, George Limnelius' The Medbury Fort Murder (1929) and Mason Wright's The Army Post Murders (1931). 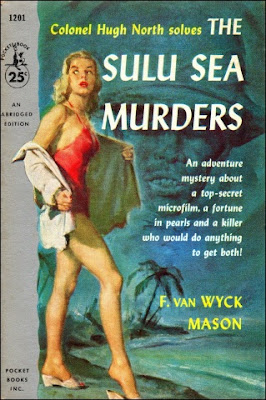 Brian Skupin's Locked Room Murders: Supplement (2019) appended that list with a fourth novel, Van Wyck Mason's The Sulu Sea Murders (1933), which described the locked room problem as the "shooting of a man alone in a room at the guarded top of a tower on a military base." The military base here is a godforsaken outpost on a small, sultry island, Sanga Sanga, on the edge of the Sulu Sea in the southwestern Philippines.

The Sulu Sea Murders is the seventh title in the Captain Hugh North series and begins with Captain North listening to the dying words of a pearl diver, George Lee, who had been shot at a dive bar, but the only substantial thing Lee can tell him is that the shooter had a butterfly tattooed on his arm – mostly rambling and raving about a sunken ship, pearls and the "blue dog's belly." So its up to Captain North, an intelligence officer of the Department of Criminal Investigations, to apprehend his murderer. A task bringing him to the gates of Fort Winfield.

Fort Windfield is an old Spanish fortress, nicknamed Killers' Castle, where the "withering, nerve-blasting heat" made "killing easy" and the natives say that the fort has been unlucky ever since "the bleeding hands of Spanish slaves" had reared its solid walls. A commander during Spanish times had gone on a killing spree and there have always been "an unholy lot of suicides," which makes "a sinister Jolly Roger" more suitable to raise on the top of the guard tower than the Stars and Stripes of the United States. A bad reputation that scarcely improved under the iron rule of the unpopular, much despised commanding officer, Major John Flood.

Captain North feels upon his arrival that something is not quite right, because normally, men tucked away in distant corners of the world welcomed strangers and particularly an army legend, like North, but the "weary, heat-tortured men" reminded him of card players "interrupted by an intruder" – right before a game for high stakes. Why is everyone so interested in the barometer dropping? These are the first signs that the case is not going to be as easy as Captain North had hoped.

The man who killed George Lee is quickly identified as Private Paul Laval, of B Company, who's placed under arrest and confesses to have shot the diver during an argument. But what Captain North learns too late is Laval's past circus career as an acrobat, escape artist and human-fly. When goes to check on the prisoner, Laval had indeed found a way out and left behind a dead guard. A second, practically identical, murder soon follows with the victim dying with that strange phrase on his lips, "blue dog's belly."

The Sulu Sea Murders actually comprises of two different, intertwined, story lines tied together in the last few chapters, but the contrast between the first and second half of the book showed how much this series occupied the borderlands between the adventure, detective, espionage and pulp fiction – colored with the palette of the regional mystery novel. The first half is a mild adventure/thriller with an escaped murderer running loose on "a postage-stamp island" and Captain North eavesdropping military style or diving to the sunken ship without any equipment, which gave the book one of its best and most memorable scenes. Captain North is presented as someone who's as much at home on the pages of an adventure story as he would be tangling with villains in James Bond-style spy thriller, but the second half revealed him to be somewhat of a Sherlock Holmes and Dr. John Thorndyke! 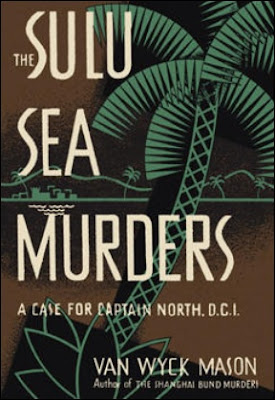 After the second murder, the primary suspect is kept in protective custody in one of the top rooms of the tower, guards posted at the stairs, with the only other way up being two hundred feet of unbroken masonry. A physically demanding wall to climb and impossible to complete without being seen by the sentries below, but the person who was held there was found with his head blown to pieces. However, the description from Locked Room Murders: Supplement wrongly described that the victim had been all alone, which is incorrect, but a chemical experiment eliminated this suspect when it showed his gun had not fired the fatal shot. Captain North also relies on his scientific knowledge to crack the locked room problem, but not before carefully constructing and then having to discard a "once glittering theory." A unexpected, but nicely done, false-solution.

The correct solution to the shooting at the top of the guarded tower was and unexpectedly good, and interesting, trick, but not for the usual reasons.

Van Wyck Mason shamelessly "borrowed" from two short impossible crime stories written by the same, highly regarded, writer, but I detest those two stories and finding out that their solutions were melted together here to create a superior locked room-trick earned him my forgiveness – because he showed how these tricks should have been used in the first place. Although some will likely disagree with me on that point. But there's more to the second half than the impossible shooting.

I already mentioned Captain North conducting experiments and building theories, but there's also a surprisingly amount of clueing and fair play that almost makes you forget certain details were glossed over. The Sulu Sea Murders has a busy plot and might have missed a thing, or two, but don't believe it was ever explained how exactly Laval got out of his prison cell. You can say he was an escape artist, but the cells are inside a centuries old fortress with thick walls, arrow slit windows and iron eyes where prisoners were shackled to back in the days. So you have to show how exactly he was able to escape. Another thing that remained unexplained is who bandaged the wounded pearl diver.

Nevertheless, in spite of these smudges on some of the finer details, the main plotlines were clearly stated and resolves in a highly readable blend of the traditional, Golden Age detective story and the pulp-style adventure thriller. And these two different styles came together in a spectacular way when Captain North tried to lay a trap for the murderer. Sometimes things don't go exactly as planned! This all helped make The Sulu Sea Murders the best I've read so far by Mason and will be hard to beat as my personal favorite Captain Hugh North title, but The Yellow Arrow Murders (1932), The Hong Kong Airbase Murders (1937) and The Munitions Ship Murders (1941) all look promising. There's always Mason's standalone locked room mystery novel, Spider House (1932). So this blog hasn't seen the last of Mason or Captain North.
Geplaatst door TomCat on 7/31/2020