Earlier this month, I reviewed Todd Downing's The Last Trumpet (1937), a minor gem of the North American regional mystery novel, which Coachwhip reprinted as a paperback in 2012 and discovered at the time a handful of Downing's Hugh Rennert novels were reissued in March as ebooks – courtesy of MysteriousPress/Open Road. Since we're about a month into the summer, I decided to delve into the sultry-sounding Murder on the Tropic (1935). I was not disappointed! 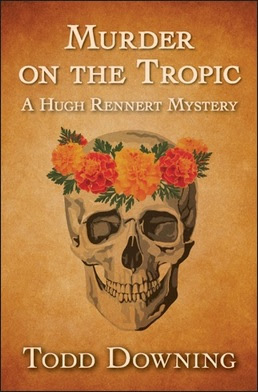 Murder on the Tropic is the fourth title in the Hugh Rennert series, an agent of the Customs Bureau of the United States Treasury Department, who discovered he's getting older and started looking towards retirement with purchase of a citrus farm. An early spring freeze ruined a lot of citrus fruit down in the Lower Rio Grande Valley and this cold wave had hit Rennert's hundred and twenty acres hard, but a proposal to go on "a little mission" comes with a paycheck that will replenish his coffers.

Edward Solier is a Texas businessman with an interest in a remote, isolated hacienda down in Mexico, named Flores, which had been bought based on certain information that the new Pan-American Highway, to Mexico City, would cut through the track of land and wanted to erect a luxurious hotel on the spot – a plan that was spoiled when the route of the highway was changed. So now he was left with an isolated and practically useless property on his hands.

A company had been formed to buy the property and build the hotel, which sold shares, but now they want to get rid of it. Only problem is that one person refuses to sell back her block of shares.

Miss Bertha Fahn is a botanist who invested a small sum of money and has been staying at the hacienda to do "some kind of a study of plants and flowers," but they have no idea why she flatly refuses to sell. Or why she requested 126 postcards. Solier wants Rennert to persuade Miss Fahn to sell back her shares and find out who has been emptying bottles of water during the night, which is becoming a problem now that springs are drying up and the place is becoming dependent on bottled water. Rennert accepts an easy paycheck, but discovers that the quiet, isolated hacienda has a palpable "undercurrent of repressed emotions" and compared his task with "sitting on top of a volcano."

When he arrived at the hacienda, there are eight people: Solier's two business partners in the failed project, Tilghman Falter and George Stahl, but Stahl unexpectedly died of sunstroke and his interest went to his stepson, Mark Arnhardt – who's also present at the hacienda. Stephen Holman is the architect who designed to the hotel, but came down with tuberculosis and stayed there with his wife, Ann, in the hope that the climate would help him. Esteban Flores is a young Mexican whose airplane crashed there and is trying to get new parts to repair the plane, but the place used to belong to his family. And he spends his time searching for the long-lost body of his grandfather. Miguel and Maria Montemayor have been caretakers of the hacienda since the days of Flores' grandfather. Lastly, there's the stubborn Miss Fahn and the Chinese cook, Lee, who returns from a family trip after Rennert's arrival.
All of these characters come with a little side-mystery that has to be solved or else carry a piece of the puzzle, which means Rennert has to clear a lot of debris before he can reveal who has been behind a series of very subtly executed murders. A series poisonings with all the unnerving and fantastic eeriness of John Dickson Carr! 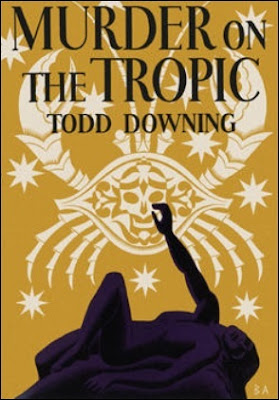 George Stahl had supposedly died of sunstroke before two weeks before Rennert arrived at the hacienda, but "he kept talking about the air being yellow" and "the strange illusion" that everything appears yellow is recurring symptom of the people who fall ill and die at the hacienda – three of them in total. These mysterious illnesses and deaths add substantially to, what's arguably, the strongest aspect of the story, the isolated setting.

Hacienda Flores is situated in "a hidden pocket of the mountains," on the Tropic of Cancer, where "a precipitous valley debouched onto the desert." Downing doesn't relay on cheap or crude plot-devices to completely seal the characters away from the outside world. There's a short-wave radio set that allows constant communication with the outside world, but it gets through the story undamaged and the tropical hurricane lurking in the background only temporarily hinders their movement towards the end. Regardless of these exists, or air holes, Murder on the Tropic is one of the best and most convincing isolation-mysteries on the book. You really get the idea that the characters are tucked away in a lonely, nearly unreachable pocket of the world. Even though that's not entirely the case (they get bottled water trucked to them everyday), but the illusion of isolation is very convincingly and effectively done.

There are, however, two weak spots in an otherwise solid and cleverly constructed plot: the clueing is a little iffy in certain places (such as the nature of poison) and even with the clues that were given, the twist ending is easily anticipated – because the murderer (sort of) stands out. A kind of cliche that will make any seasoned mystery reader suspicious. But these minor drawbacks were hardly enough to ruin an engagingly written and leisurely plotted detective novel. A detective novel full of dreamlike, but often unsettling, mysteries and wonder of the desert.

Honestly, if Murder on the Tropic had been published 5-10 years later, I would have assumed Downing had been trying to emulate some of Agatha Christie most well-known mysteries, but she had not yet written Murder in Mesopotamia (1936), Death on the Nile (1937), And Then There Were None (1939) and Evil Under the Sun (1941) at the time. So, if you liked any of those titles, you'll likely find a lot to enjoy in Murder on the Tropic.

I'll end this review with a warning to everyone who's new to Todd Downing: don't begin with The Cat Screams (1934), because its an inferior work compared to Murder on the Tropic and The Last Trumpet that has kept me away from Downing for nearly a decade. But now that I have rediscovered him, I'll try to read and review The Case of the Unconquered Sisters (1936) and Death Under the Moonflower (1939) before the summer draws to a close.
Geplaatst door TomCat on 7/21/2020