Graham Landrum was an American college professor of English and a school teacher in the Presbyterian Church, but more importantly, he authored a handful of detective novels, published around the mid-1990s, that form the Borderville series – helmed by an 88-year-old widow and amateur sleuth, Mrs. Harriet Bushrow. A modern series of apparently classically-styled detective stories, but with menacing hints of coziness in the patterned book titles and cover art. Normally, I likely would have never touched this series had Brian Skupin not included The Rotary Club Murder Mystery (1993) in Locked Room Murders: Supplement (2019). So the decision was taken out of my hands. 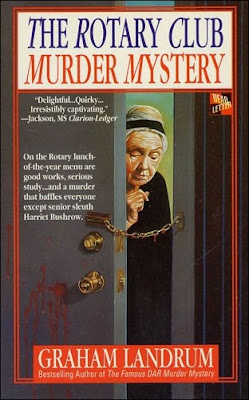 The first thing that has to be said about The Rotary Club Murder Mystery is that Landrum used multiple narrators, no fewer than five, to tell the story, which is not a revolutionary new idea, but one that has been scarcely employed in the (traditional) detective story – only a couple of examples spring to mind (e.g. Michael Innes' Lament for a Maker, 1938). Two of the narrators are Rotarians, Henry Delaporte and Dr. Frederick M. Middleton. Henry is married to the woman who narrated The Famous DAR Murder Mystery (1992), Helen, while Frederick has the inside dope when a body is discovered at local motel. Maud Tinker Bradfield is the third narrator and has been close friend of Mrs. Bushrow for over seventy years. One of the suspects even gets a whole chapter to tell her side of the story, but most of the chapters come from the hand of Mrs. Bushrow. No matter how tired she gets of "all this writing."

So this makes The Rotary Club Murder Mystery very aware that it's a mystery novel. The suspect who gets to tell her side of the story begins with the statement that it was "a bad idea" to include her as a narrator, because "it removes me from the list of suspects." Mrs. Bushrow is recognized in a public library and is asked to sign a copy of The Famous DAR Murder Mystery. Graham Landrum has an off-page cameo explaining to Mrs. Bushrow that "detective stories are classical" with "a beginning, a middle, and an end." Everything that happened "up to the time when the crime takes place" settles "what happens all the rest of the way until the mystery is solved." The middle part is where "everything is developing and confused." Yes, this marked the beginning of the middle portion of The Rotary Club Murder Mystery. But I'm getting ahead of myself here.

The Rotary Club Murder Mystery begins with the visit of the Rotary district governor, Charles Hollonbrook, to speak at the Rotary Club of Borderville, Tennessee, but Hollonbrook failed to emerge from his motel room and the door had to be broken open to get inside – where his body was found lying on the bed. A small entry wound below his chin and a bullet embedded in the headboard correspond with the service .45 automatic near his right hand and a suicide note on the bedside table.

So with the only door locked and securely chained on the inside and a heavily draped, plate-glass window, "incapable of being opened," it could have only been suicide. Dr. Middleton is suspicious of the strangely worded suicide note and the fact that he apparently shot himself in the middle of a good book. And he has a point there. 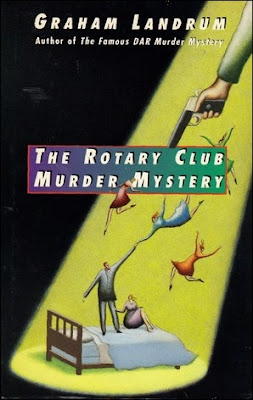 Mrs. Bushrow is encouraged to shake the mothballs out of her deerstalker and carry out a private investigation with the (financial) support of the Rotary Club's version of the Baker Street Irregulars. She travels between Tennessee and North Carolina to collect alibis, clues and motive, which is easy enough, since Hollonbrook had an insatiable sexual appetite and an expensive taste. A lifestyle that came with a hefty price tag and a lot of resentment.

So everything was present to craft a good, old-fashioned and conventionally plotted locked room mystery with a modern backdrop, but the whole structure collapsed once it became apparent Landrum had committed a grave, unpardonable offense – first degree aggravated cheating with intent to underwhelm or disappoint! You see, Landrum didn't merely withheld an important piece of information, which would have been bad enough. He not only tried to be sneaky about it, which would have been much worse. Oh, no. What makes it unforgivable is that he had the gall to be cute about it!

On the cover of the St. Martin's edition, Mrs. Bushrow is examining the chain-bolt on the motel room door, which is how the bolt is presented in the story, until one of the last chapters reveals the bolt is actually "a loop of brass." A U-shape screwed into the door "in such a way that the loop swivels back and forth." This unfairly changed the whole locked room problem during the final stages of the story. Mrs. Bushrow had shown that the locked door was not the problem, but had no answer how the bolt could have been engaged, or disengaged, from the outside. So my solution was that the murderer was hidden in the motel room, laying low until Hollonbrook had taken his sleeping pills, before emerging and shooting him – arranging everything in the room to make it look like a suicide. Then unscrewed the plate of the bolt, stepped outside, and used the small crack that the chain-bolt allowed to superglue the plate back in place. And than closed and locked the door behind him/her. But the U-shaped loop destroyed that theory.

Nonetheless, I still had a small flicker of hope that Landrum, who had shown some imagination in storytelling, had played his cards too close to the chest because he had come up with an original and ingenious locked room-trick – a trick he intended to be a genuine surprise. Even if he had cheat the reader. So do you know what was waiting for me in the penultimate chapter? A big, unapologetic fuck you, that's what.

Skupin mentioned in Locked Room Murders: Supplement that the 1990s was a lean decade for the English-language locked room mystery novel as Herbert Resnicow had abandoned it in the late 1980s and Bill Pronzini only wrote short impossible crime stories during that period. But even by the standards of '90s, The Rotary Club Murder Mystery stands as an astonishing disappointing and unimaginative locked room mystery. A lean decade that still produced such notable titles as William L. DeAndrea's Killed on the Rocks (1990), Nicholas Wilde's Death Knell (1990), Mary Monica Pulver's Original Sin (1991), Peter Lovesey's Bloodhounds (1996) and Paul Doherty's A Murder in Thebes (1998).

The who-and why had some interesting ideas, but they were also bugged and diminished by similar fair play issues that plague the last quarter of the story.

The Rotary Club Murder Mystery began interesting with its multiple narrators, locked room murder and the promise of something good, or even original, but the solution was enraging and left me with slight homicidal tendencies. So not recommended to mystery readers with an easily irritated purist streak lurking underneath their civilized facade. The reader has been warned!
Geplaatst door TomCat on 7/25/2020