Virgil Markham was a strange mystery writer who eschewed the common tropes and conventions in his detective novels, eight in total published between 1928 and 1932, which have been practically forgotten today and Curt Evans wrote, in a 2012 blog-post, that the books may have been "victims of their own originality" – or "to say strangeness." A writer who steered his "narratives over worn-out ruts" to find "different and exciting ways of working with the form." And it's not easy to decide whether, or not, he succeeded in cutting new pathways through the genre. 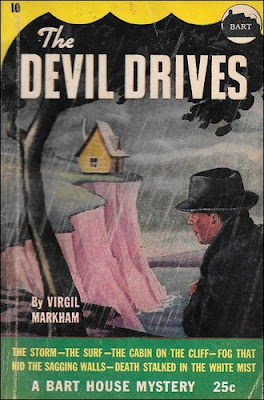 Curt referred to one of my reviews of Markham's first and most well-known mystery novel, Death in the Dusk (1928), which I described as rivaling Joel Townsley Rogers' The Red Right Hand (1945) and Fredric Brown's Night of the Jabberwock (1950) in the race for most outlandish detective story ever contrived. The outlandish plot and story-telling is also the reason why I didn't break my neck to get all of Markham's detective novels.

Death in the Dusk is a massive, nearly 400-page long, detective novel posing as a grim, blood-soaked fairy tale with bleeding portraits, levitating bones, immortal cats and an enchanted duel between medieval sorcerers, but turgid narrative makes it a slow, plodding read – requiring your undivided attention. A book that is hard to warm to and only can be appreciated for what's it trying to and not how. So was brought Markham back under my attention?

Back in 2018, The Invisible Event and The Green Capsule posted glowing reviews of Markham's third mystery novel, The Devil Drives (1932).

JJ began his review with "someone who venerates plot to the extent I do should not have enjoyed this book as much as I did," while GC praised Markham for coming up with "a completely unique solution to a locked room murder." What I gleaned of the erratic plot from their reviews, I expected something along the lines of R.H.W. Dillard's The Book of Changes (1974), but with more lucidity and substance in the writing and plotting. My expectations were exceeded, because The Devil Drives had no right to be this good and entertaining! A story that's not easily described, or defined, but absolutely wonderful to read.

The Devil Drives is narrated by the "sinfully young" warden of New Jersey's Franklin Penitentiary, George Peters, who receives a visit in the opening chapter from a representative of the Woman's Press Association, Miss Louisa Matthews Carmody – who wishes to inspect all of the parts of the prison. Peters has the unshakable feeling that Miss Carmody's primary interest was in the prisoners rather than the conditions of the prison. In the second chapter, Peters goes down to the death house to have one final talk with "a gunman with a long New York record," named Frank Holborn, who claims to have been framed. And tries to ask the warden a favor. Peters turns him down and the story really begins after the, more or less, successful execution of Frank Holborn. This is the point where the narrative becomes jittery and episodic. 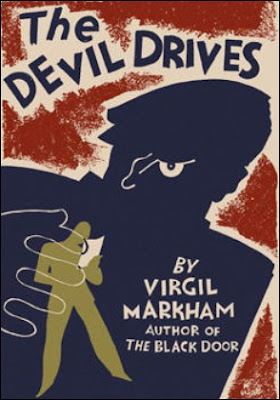 Peters receives a packet of old, undated love letters written by a 13-year-old girl, "Pat," to an obviously older man, "Dubrosky," which are full of references to "the loveliest doll's house" with a pigmy tribe inside and a buried treasure that no one will ever find – except "by earth, air and water." Someone wants to give Peters the job to find that treasure, but, in order to do so, he has to burn all his bridges behind him. And descend into the criminal underworld.

Fascinatingly, Peters assumes a false-identity and uses it to set himself up as a fixer. The underworld equivalent of a private investigator and can't remember having ever come across a character who had to play detective in that role.

What comes his way is a notorious murder trial that has taken the place of the Hall-Mills and Gray-Snyder affairs in the newspaper headlines and its unfortunate aftermath. A flamboyant gangster with fresh flowers in his buttonhole, an eccentric blackmailer, a gun-wielding countess and a long-missing, Raffles-like house thief. Everything is all over the place and it takes until the last quarter of the story to follow the twisting, winding path of the plot down to a small, lakeside cabin that looked like "a pumpkin-house in fairy tale" with its sides and back bulging "a bit like the pumpkin." When Peters looks through the window, he sees the body of man laying a puddle of water surrounded by muddy footprints, but the solid, pinewood door and windows are locked, bolted or hooked on the inside. So how did a man drown, on dry land, while locked inside a cabin?

I've to agree with JJ that the locked room-trick is not wholly original and hinges on a principle that's not exactly popular among puzzle-purists (burn the heretics!), but Markham came up with an entirely new and satisfying variation on the trick – a solution that was audaciously clued and hinted at. So have to side with GC's enthusiasm over the locked room-trick, even if it's not an outright classic.

On a side note, when the body was found and it came to light he had a non-fatal head wound, I began to suspect the pumpkin-like cabin somehow had been flooded with water and drained again, which could have been done through the chimney or those suspicious weatherstrips that helped seal the place (could they have been removed to let the water in or out?). And he had sustained the wound when he bumped his head to the ceiling when he floated to the top. But what killed him was not ordinary drowning, but delayed drowning, which would explain the muddy footprints inside (he walked around before collapsing). A hypothesis I had to abandon because it didn't fit the timeline of the story, but still wanted to share that pulp-style locked room possibility with you.

The Devil Drives is a strange animal and a bundle of contradictions. A simplistically complicated story with a loose, episodic plot tried together with a string of coincidences, some harder to swallow than others, but somehow, it worked – punctuated with an ending that gave everyone involved déjà vu. There's no logical reason why it worked, but, somehow, it did and the result was very pleasing. One of the most unorthodox and curious (locked room) mysteries I've read in a long time!
Geplaatst door TomCat on 7/10/2020