Todd Downing was an American advertising copy writer, novelist and reviewer who was born in Atoka, Choctaw Nation, Indian Territory (Oklahoma), who began his stop-and-go academic career as an instructor in Spanish at the University of Oklahoma and ended it as a teacher at Atoka High School – capped with his appointment to Emeritus Professor of Choctaw Language and Choctaw Heritage. But his academic achievements pale in comparison to the body of work that made him, to quote Curt Evans, "one of the most important regionalist mystery writers of the Golden Age." 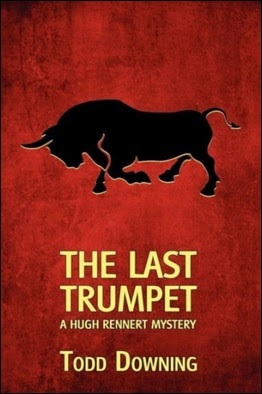 When he was teenager, Downing began devouring the detective-and thriller stories by Arthur B. Reeve and Edgar Wallace at "a prodigious rate" and graduated to the Golden Age detective fiction of Anthony Berkeley, S.S. van Dine and Rufus King in the 1920s. These years formed the foundation for his career as a mystery reviewer and writer in the 1930s. Downing reviewed John Dickson Carr, Agatha Christie and Ellery Queen in the literary pages of Oklahoma City's Daily Oklahoman and published his first mystery novel, Murder on Tour (1933). A novel that introduced United States Customs Service Agent, Hugh Rennert, who made seven appearances between 1933 and 1937, which are mostly set in Mexico.

So a writer who should have had more of my attention, especially since all of his novels were reprinted by Coachwhip, but mistakenly decided, years ago, to begin with his most well-known detective novel, The Cat Screams (1934) – a detective story undeserving of its reputation. Downing redeemed himself with Vultures in the Sky (1935), but, sort of, forgot about him until I recently came across my copy of The Last Trumpet (1937).

Now that I've read it, I finally understand why Curt has been gushing over Downing and devoted an entire book to him, Clues and Corpses: The Detective Fiction and Mystery Criticism of Todd Downing (2013).

The Last Trumpet takes place around the sun-soaked border towns of Mexico and the United States, during the Christmas season, where Hugh Rennert has retired to grow citrus fruit. When the story opened, Rennert had been on an errand to Matamoros when a friend, Kent Distant, drags him to the debut of a young matador, Carlos Campos. Everything appeared to go well, until Campos was about to deliver the golpe de gracia with his sword when "a spasm of pain contorted the man's face." And he got fatally wounded by the horn of the bull.

An unfortunate tragedy that becomes highly suspicious when it turned out that Campos was one of the witnesses in a lawsuit between Dr. Paul Torday and the Mexican National Railways, which stemmed from a horrific collision when a passenger train crashed into a sidetracked Pullman sleeper – killing four people and left the doctor crippled. Dr. Torday was not expected to survive his injuries and the railway company offered him a thousand dollars a week indemnity, but he didn't die and held them to their bargain. So now they're trying to break their indemnity by going to court. And it turns out that the witnesses in this ongoing case have been plagued by fatal, or near fatal, accidents around the same time of the year. 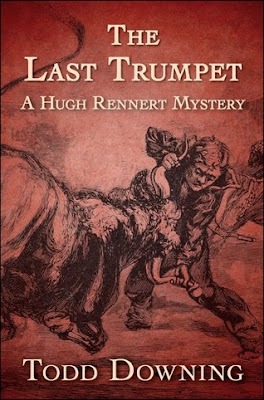 Over the past two years, around Christmas time, death stalked the group of witnesses with various degrees of success. One of the witnesses was killed in a hunting accident and Dr. Torday's car had been nearly forced of the road. Now the young matador had been killed in a suspicious-looking mishap and someone else was shot and wounded while on an evening walk, but, more interestingly, another man is shot and killed while crossing the crowded International Bridge, over the Rio Grande, connecting Mexico with the United States – offering a potentially diplomatic nightmare scenario. What if "the gun had been fired a foot or so inside Mexico," but "the man died in the United States?" or "if the murderer had stood on the United States side, shot across the line, and then stepped over into Mexico?"

A great idea that should have been used as the premise of a separate detective novel instead of being merely a puzzle piece.

Dr. Torday tries to hire Rennert to find out, whether or not, there's a plot against him and his witnesses, but he turns him down and accepts the position of deputy sheriff (without a pay) to find a solution to these nebulous deaths. And why they had to die. Since it's highly unlikely that the Mexican National Railways is committing mass murder to get out of an ordinary lawsuit.

So the plot of The Last Trumpet very much reminded me of the Christie's Murder is Easy (1939) and John H. Vance's The Fox Valley Murders (1966) with its series of suspicious, homicidal-looking accidents and the explanation Rennert's uncovered was immensely satisfying and pure Golden Age. One part of the solution is a variation on a trick used by two of the previously mentioned mystery writers, but Downing found an original use for it and strengthened the solution by giving the murderer a ruthless motive, which made for a memorable ending to a classic American detective novel. Only (minor) blemish on the plot is that it needed the presence of a lot of left-handed, or ambidextrous, characters in order to make it work, but a flaw I can easily forgive when learning why they were needed – showing you can stretch things a little if you have something to show for it in the end. Downing definitely delivered here in the end!

The Last Trumpet is a small gem of the American detective story with a plot that appeared to be as loose as sand when you're reading it, but the solution revealed everything stuck together like conjoined twins. So, plot-wise, The Last Trump is an excellent detective novel, but the writing and setting demonstrated why Curt considers Downing as one of the best regional mystery writers of his day. Obviously, Downing loved Mexico and that love is reflected in his writing. Most heartily recommended!

A note for the curious: one of the characters predicts that "solar heat would eventually be converted into cheap energy" and "take the place of mineral fuel," which felt a little out-of-time and wondered if the text had been "updated." But a quick search showed that people have been experimenting with solar energy since the late 1800s. Still, it was unexpected to come across a reference to solar energy in a regional mystery novel from the 1930s.
Geplaatst door TomCat on 7/03/2020