"Obviously his hiding place must be something not only normal... but a location utterly above suspicion—invisible, not literally, but one the police see right through, and don't dream of checking."
- Cyriack Skinner Grey (Arthur Porges' "The Scientist and the Invisible Safe," from The Curious Cases of Cyriack Skinner Grey, 2009)

Two weeks ago, I reviewed one of William Arden's contributions to The Three Investigators series, The Secret of Phantom Lake (1973), which mentioned my previous blog-posts about Robert Arthur's The Mystery of the Whispering Mummy (1965) and The Secret of Skeleton Island (1966) – which caught the attention of a fellow blogger who left a couple of interesting comments on my review of Skeleton Island.

Mike West is a writer who blogs at Strange Tales: The On-Line Presence of Mark West and wrote an insightful overview of the series, "Nostalgic for My Childhood – The Three Investigators," and compiled an "All Time Top 10." In addition to a number of reviews of books from the series. As long-time readers of this blog know, I find enthusiasm about detective stories to be very contagious and Mark West's post about The Three Investigators compelled me to plot an early return to the series.

I settled down on the twenty-third entry in the series, The Mystery of the Invisible Dog (1975), which was penned by M.V. Carey and it was one of the sixteen titles she wrote for this long-running series – making her one of the most prolific contributors to The Three Investigators. My reason for picking The Mystery of the Invisible Dog is as simple as it banal: I knew a key point of the plot was based on a short story by my favorite mystery writer, John Dickson Carr. The story in question is even mentioned and described, but the plot of this book does not feature any seemingly impossible problems. On the contrary, but more on that later.

The Mystery of the Invisible Dog largely takes place during the dark hours of a late and chilly December. Jupiter Jones, Pete Crenshaw and Bob Andrews tightly wrap themselves in another case in order to avoid Jupe's Aunt Mathilda, because they do not want to spend their holiday doing odd jobs on The Jones Salvage Yard. So a client is very welcome.

Mr. Fenton Prentice of 402 Paseo Place is a patron of the arts, who gives "generously to museums and individual artists" and his apartment is "a luxurious showcase for an art collection," which is stuffed with paintings, statuettes and antiques. However, it makes his problem all the more peculiar. Someone has been entering his apartment and rummaging through his papers, reading his letters and left desk drawers partially open, but Prentice "had a special lock installed" and even the manager of the apartments, "that loathsome Bortz woman," had no way to enter his rooms – yet there's someone who can enter and leave them without his knowledge. Who's this intruder and why does this person left any of the valuable items in the apartment untouched?

There's something else going on: Prentice is plagued by the unsettling feeling of being haunted and watched by an elusive, shadowy and ghost-like figure.

A shadowy figure who shows himself twice to Jupe! One of them occurred halfway through the book and could easily have been a promising setup to what could have been an intriguing impossible problem. Jupe experiences "a sensation of a darker darkness" in the corner of the apartment room, but when he jumped towards the corner "his hands groped at walls" – simply "plain plaster walls." I had the silent hope this would have been something along the lines of Joseph Commings' "The Black Friar Murders," collected in Banner Deadlines: The Impossible Files of Senator Brooks U. Banner (2004), but that turned out not to be the case. Anyway, we have not even gotten to the meat of the plot. 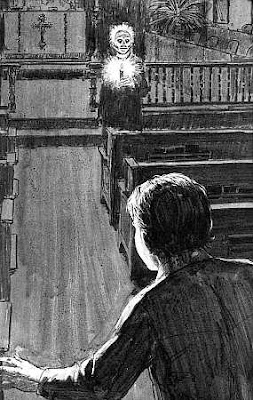 During their first visit to Mr. Prentice's apartment, Jupe, Pete and Bob happened to witness a man fleeing from the police and it turns out this person burglarized the home of the late Edward Niedland – an artist and personal friend of Mr. Prentice. Niedland had made a crystal sculpture of a hound for Prentice, which was based on a two-hundred year old legend from the Carpathian Mountain: one of the half-starved hunting dogs of a Transylvanian nobleman killed a child from the village and his nonchalant response was answered by a stone being hurled at his head. The noble man was fatally injured, but used his last breath to curse the villagers and vowed he would return from the grave as a huge, demonic hound. He must have been a relative of Vigo the Carpathian.

The theft of the crystal statuette triggers a series of crimes in the neighborhood, which begins with the attack on the caretaker of the local church and an appearance of the ghost priest that reportedly haunts the place – holding a flickering candle. But after that the crimes really begin to pile up: a batch of poisoned chocolates gave someone a severe case of indigestion, a small car bomb forced a car to uproot a fire hydrant and there was a serious house fire.

One of the policeman remarks how "things have been really weird on this block the last couple of days," but the theft of the Carpathian Hound and the string of apparently erratic crimes following in its footsteps constitutes the best part of the plot. I really appreciated how they were all linked together and loved how cleverly the hiding place for the statue was used as a piece of (prominently displayed) background scenery.

I thought that part of the plot was very well, but the explanation for the ghostly apparitions was maddeningly disappointing. Apparently, the supernatural has a sway in Carey's rendition of The Three Investigators, which makes me very, very hesitant about her other contributions to the series. I do not want to see ghosts, astral projections or any kind of magic seriously being used as a potential explanation in detective fiction. There always has to be a natural answer to apparent supernatural phenomena in detective fiction.

So I really feel split on The Mystery of the Invisible Dog: on the one hand, I really liked the parts of the plot which dealt with the theft of the Carpathian Hound, but disliked the supernatural aspect of the story. Guess the next time I pick up a novel about The Three Investigators, it'll be one by either Robert Arthur or William Arden.

But for my next blog-post, I'll be returning to the Golden Age of Mysteries. So stay tuned!
Geplaatst door TomCat on 4/21/2016