A Devil of a Time

"Those who cannot remember the past are condemned to repeat it."
- George Santayana

If you're one of those souls who haunt this place with a certain degree of regularity, then you have probably spotted my glowing opinion on the greatest mystery writer who ever lived, the wonderful John Dickson Carr, who's still rightfully regarded as the undisputed master of the locked room mystery. But he also dabbled in another field of the genre that's often overlooked: historical mysteries and adventure stories.

During the 1950s, Carr became slightly disillusioned with the modern, post-war world and he began to retreat into historical fiction, which would come to dominate his output in the last decades of his life – beginning with the highly regarded The Bride of Newgate (1950) and ending with the very rare The Hungry Goblin (1972). 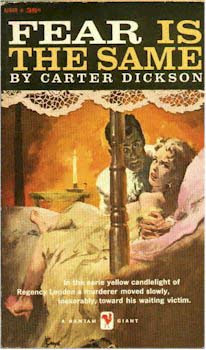 As I said before, Carr is seldom recognized for helping popularizing the historical detective story, but even rarer is seeing an acknowledgment for his contributions to an extremely obscure niche within this particular sub-genre: namely time-slip novels!

Carr wrote three of such stories in which the twentieth century protagonists are transported back in time and have to piece together certain events among the ghosts of the past. The Devil in Velvet (1951) and Fire, Burn! (1957) are relatively well known to both his fans and readers of historical detective stories, but Fear is the Same (1956) seems to be completely forgotten by everyone and appeared, for some reason, under his penname of "Carter Dickson" – which he primarily used for his Sir Henry Merrivale series. Its neglect is hard to explain and entirely undeserved, because it's as good a story as its two companions.

Fear is the Same has two characters caught in a time-slip, Lord Philip Clavering and Jennifer Baird, who were passionate lovers in the mid-1950s, but "a clap of thunder" and "a roar" flung them back in time – all the way back to the Regency Era in 1795. The experience has pulled a veil over their memory, but one that only vaguely obscured their knowledge of their life in the future. Memories come rushing back when they meet again, "it seems a little ridiculous to ask whether we have met before," but their new situation in this old world is as fraught with complications as their past lives a hundred and fifty some years in the future.

Philip found himself in the body of a rich, but spineless coward, Lord Glenarvon, who's married to a woman he intensely dislikes, named Chloris. Jennifer is a relative and ward of Lady Oldham, who has given her blessing to a marriage between Jenny and Richard Thornton. He's the son of Colonel Tobias Thornton, "of the King's Royal Dragoons," who serves as the story's antagonist and has several confrontations with Philip, which consists of what you probably expect from a rivalry in a period yarn from Carr's hands – fisticuffs and a bit of dueling! Again, what did you expect? It's Carr!

Anyway, there were also the bleary recollections of a murder more than a hundred years in the future. A murder they were so hard on the run for that they ended up in the 18th century, but the consequences seem to be inescapable, because similar events begin to unfold in front of the two lovers. 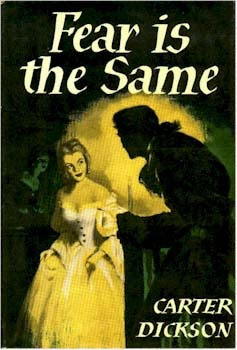 The maid of the Glenarvons, Molly, has been doubling for her mistress when she was out of the house and this may have resulted in her death, because her body is found in Chrloris' bedroom – strangled to death with a bell rope. Superficially, Philip looks to be guilty of the deed and the magistrate is on his way to procure an arrest, which makes him flee for a second time. This time has to look out for the Robin Redbreasts from the Bow Street Runners. However, the whodunit element is a surprisingly underplayed part of this historical romance and adventure story: there's a sort of set up in the early chapters, the murder itself (chapter 8), a late investigation in chapter 14 and an explanation chapters 19 and 20. The plots in Carr's historical novels tend to be less elaborate than in his regular series, but they're usually nicely done. I found the one in Fear is the Same to be somewhat routine, but it was acceptable enough.

What's written between the detective story is, as said before, a romance adventure set in the Regency Era, but Carr had a strong a love for history as he had for detective stories and it shows. Philip has to outwit Colonel Thornton in a close quartered pistol duel and gets drawn into a fistfight with a guy known as the "Bristol Smasher," which followed by a boxing match towards the end of their journey. But Philip and Jennifer also crossed the path of several historical characters. The most notable is the Prince of Wales, who would be later known as King George IV, who "the lampoonists," of the future, "show as popinjay and jack-fool," but was cast here in a fairly sympathetic light. Carr always had a royalist streak in his historical writing.

Then there are the moments when Philip accidentally betrayed knowledge he was not supposed to have in the 1790s, which includes being familiar with certain people who have not yet risen to prominence ("Who the devil’s Napoleon?") or knowledge of court secrets for which "proofs had been discovered" in "modern times."

So, all of this makes for a well-written, eventful and, above all, a fun historical narrative, in which a mystery plot is expertly wrapped in thick elements of romance and adventure. The ending had a hint of Charles Dickens, which I found slightly disappointing, because I had predicted a very dark ending based on the clap of thunder that threw back into the past. I suspected it was them dying in the 50s and somehow woke up in a parallel time-line, in the past, where they to go threw it again, but this time try to stay alive. But that's more a fault of my expectations. In short: if you enjoyed some of the other historical novels mentioned in this blog-post, you'll probably appreciate Fear is the Same.
Geplaatst door TomCat on 4/09/2016