"My ambition is still to write a really outstanding detective novel, which I honestly do not believe I have yet achieved. When a writer says this, what he really means is that he wants to wrote one which will make all other detective novels look silly. Of course you can't do it. But you can always keep trying."
- John Dickson Carr

Recently, I've been coming across blog-posts such as "Five to Try – Starting John Dickson Carr," which appeared on The Invisible Event, and "A Bit of a Ramble – John Dickson Carr's Great Works" from fellow mystery enthusiast Puzzle Doctor – which reminded me of a shameful omission on my part. 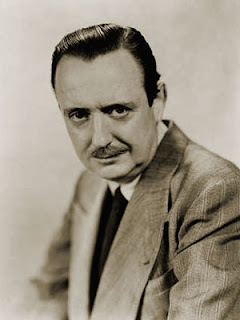 Over the past several years, I wasted a number of opportunities, filler-posts and an immeasurable amount of basic logic by neglecting to assemble my very own list of favorite John Dickson Carr novels. Logically, such a list should've been one of the first entries on this blog. But, hey, better late than never, right?

John Dickson Carr shouldn't require an introduction, especially around these parts, but if you're one of those uncivilized, heathenish infidels, unfamiliar with the Lord of the Locked Room Mystery, you might want to take note of this list – or risk suffering the same faith as Duc de Saligny. The reader has been warned!

I have broken down this best of list in three categories: series-books, standalones and historical mysteries.

The Lost Gallows (1931) was the second detective-story from the mind of a young John Dickson Carr and can be considered a premonition of things to come, which consists of a lost street and a murderer, known as "Jack Ketch," roaming the fog-bound streets – cumulating in one of the "prettiest fancy in the whole realm of nightmare."

The Four False Weapons (1937) is the last entry in this series and moved away from the gothic, theatrical atmosphere of the earlier books, but without being any less mystifying or satisfying. The plot itself is fantastic: a retired Bencolin unravels a brilliantly contrived murder in France, which was obviously modeled around G.K. Chesterton's "The Three Tools of Death," from The Innocence of Father Brown (1910), and the Hanaud stories by A.E.W. Mason.

The Mad Hatter Mystery (1933) is the second book in the series and while not as atmospheric as its predecessor, Hag's Nook (1933), but the plot is a lot tighter and involves a series of pranks resulting in a crossbow-murder – committed at the historic Tower of London. One of the plot-points involves a long, lost manuscript by Edgar Allan Poe and Carr "reproduces" a short passage from this hitherto unknown Auguste Dupin tale. 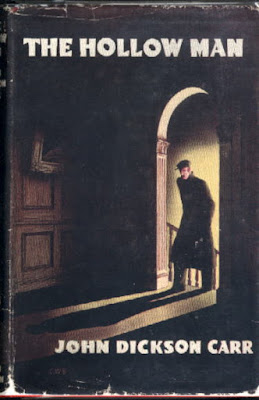 The Hollow Man (1935) is, IMHO, a fabulous Chestertonian-tale of the miraculous shooting of Professor Grimaud in his locked/watched study and later an equally baffling crime in Cagliostro Street, but the book seems to have lost some of its popularity in recent years (heresy!). The solution is incredible tricky and I have seen the fairness being called into question, but the story derives its admiration from offering an overly ingenious and complex situation – without the plot becoming a cluttered mess. You can perfectly understand by the end of the book how everything went down. That's what attracted fans of fiction to this book for over half a century: it's the fantastic and nearly unbelievable being pulled off in an almost perfect and convincing manner.

The Arabian Nights Murder (1936) is one of Carr's Baghdad-on-the-Thames stories, in which Dr. Fell makes his only appearances in the opening, middle and ending portion of the book – while listening to three different narratives about a strange night at the Museum of Oriental Art. Highly recommended!

The Crooked Hinge (1938) is often billed as an impossible crime novel, but the eventual explanation makes it more of an improbable murder and a Chestertonian-nightmare, but it's a great one nonetheless. The plot-threads consist of Tichborne claimants-type dispute, witchcraft, the Titanic and a creepy automaton called the Golden Hag.

The Problem of the Green Capsule (1939) is one of Carr's more bizarre, but satisfying, mystery novels, in which an amateur psychologist, Marcus Chesney, stages an observational experiment to oust a murderer in his village – who killed several children with poisoned chocolates. Naturally, in a Carr story, Marcus is murdered in front of his captivated audience without anyone have spotted the murderer.

Till Death Do Us Part (1944) is Carr's most successful attempt at creating an Agatha Christie-type of village, but with his own typical spin on – which includes a persecuted woman and a locked room shooting. This one appears to have gained some popularity with 21st century readers of vintage mysteries.

He Who Whispers (1946) is considered by some as the true masterpiece from this series, because it has everything: dark, grim atmosphere, excellent story telling, misdirection and an improvement on the persecution-plot from Till Death Do Us Part – with a woman who's suspected of being a vampire and therefore a natural suspect of a seemingly impossible stabbing atop of a tower in France. I definitely liked this one, to say the least. 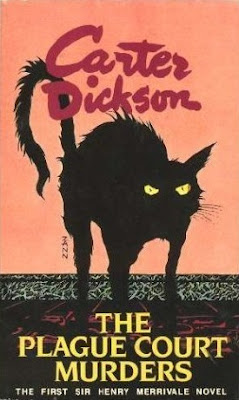 The Plague Court Murders (1934) is the one that pushed me over the edge and convinced me of Carr's brilliance as a mystery writer, which was done by murdering a fraudulent medium on the premises of a haunted house – inside a locked room, of course! The solution is incredible tricky, cheeky and the murderer is neatly tugged away from the reader, but all the clues are there and that tightrope was successfully traversed.

The Unicorn Murders (1935) has Carr balancing along a similar tight-rope in order to fool the reader, but it's arguably even more successful as he balances between a formal mystery and a spy-thriller – stranding a group of survivors of an air-plane crash in a French chateau with a legendary criminal a la Arsène Lupin. There are also a couple of interesting and original (impossible) murders: people are being gored to death by an invisible unicorn!

The Punch and Judy Murders (1937) is a wacky mad chase story and pits Ken Blake against Murphy Law, while the tell-tale clues march along noticed and are eventually followed by a couple of false solutions. A very competent and amusing entry in this series.

The Judas Window (1938) is arguably the most iconic book in this series and sports one of Carr's most original trick, but the clip the length of this blog-post I'll refer you to my full review of the book.

Nine-and Death Makes Ten (1940) is a personal favorite of mine and possibly one of the best shipboard mysteries, which places H.M. aboard a munitions-carrying ship crossing submarine-infested waters and has an interesting impossible situation – that of bloody, "ghostly" fingerprints that doesn't match with any of the passengers.

She Died a Lady (1943) is undoubtedly the masterpiece of this series, but, again, to prevent this post from assuming the size of bloated canal corpse, I'll refer you to the full review of this book.

The Skeleton in the Clock (1948) is, admittedly, the weakest admission on this list, but the plot is still very descent and concerns itself with poison-pen letters, an impossible crime in the past and recent murder at a disused prison complex – which are neatly tied together by the end of the story. But the best parts of the story are the comedic bits-and-pieces, which genuinely made me laugh when I read it for the first time. 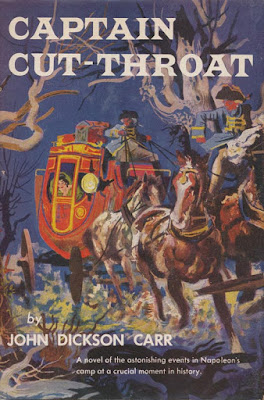 Poison in Jest (1932) is a gothic-style mystery novel and takes place in a decaying, Pennsylvanian mansion in the dead of winter, which has a creepy, brooding atmosphere depicting such horrors as a disembodied hand from Caligula's statue "run" along the window ledges like a spider. There's also poisoned brandy pored from a sealed bottle and dying laughter echoing through the dilapidated hallways. I really want to re-read this one!

The Murder of Sir Edmund Godfrey (1936) is a brilliantly conceived and convincingly argued reconstruction of a real-life crime from the days of Charles II, but it's mainly included here because it perfect demonstration of the authors gift for resuscitating the past through the written word.

The Emperor's Snuff-Box (1942) is a triumph among Carr's standalone novels, but I'll refer you to my full review for reasons previously stated in this post.

The Bride of Newgate (1950) is Carr's first historical mystery novel and one of his best, but, once again, I have to refer you to my previously review of the book.

The Devil in Velvet (1951) was considered by the author himself to be one of his finest achievements and how can you argue against it? The book revolves around a deal with the devil himself, which sees an exchange of Professor Nicholas Fenton's soul for a one-way trip to the late 1600s – in a futile attempt to prevent a murder by poisoning. However, this capsule synopsis doesn't do any justice to the book as a whole.

Captain Cut-Throat (1955) is a strange, but massively underrated, hybrid-novel stitching together the seams of the spy-and adventure stories with that of the traditional mystery – which takes the form of an invisible assailant, the titular "Captain Cut-Throat," bumping off Napoleon's sentries on the eve of the planned invasion of England. If there's one of Carr's lesser-known works that deserves recognition, it's this one! And I'll be re-reading and reviewing it before long.

Well, if there's one thing that became obvious after compiling this list, it's that I'm a bit of a heretic myself, because time has dimmed a lot of the details of the books I have read. So this list is already a candidate for revision somewhere in the future.

On a final note, there two more, locked room-related things: yesterday, I posted a review of Michael Bowen's Washington Deceased (1990), which featured a shooting in locked, guarded-and camera-watched supply room inside a prison complex. Secondly, I found an old, beaten-up Dutch paperback edition of Det slutna rummet (The Locked Room, 1972) by Maj Sjöwall and Per Wahlöö, but I begin to regret the purchase – because this duo almost repelled me from the detective story in my early days of discovery. So is this one as good as some fans say it is or is it dreadful and depressing as everything else they wrote?

Anyhow, I'll be back with something from the Golden Age before too long. Stay tuned!
Geplaatst door TomCat on 10/18/2015