"You've got the murderer locked in there like a cockroach under a drinking glass. How does he get out?"
- Inspector Poland (Joseph Commings' "Murder Under Glass," from Banner Deadlines: The Impossible Files of Senator Brooks U. Banner, 2004)

In a recent cumulative blog-post, titled "The Locked Room Reader II: An Overview," which commemorated the two hundredth post tagged as a "locked room mystery," I mentioned several modern practitioners of impossible crime stories – such as Herbert Resnicow and Bill Pronzini.

Michael Bowen is trial lawyer from Milwaukee, Wisconsin in the United States and an author of about a dozen mystery novels, who I have seen mentioned in the same breath as the previously mentioned locked room artisans. But his detective stories had eluded me until now. 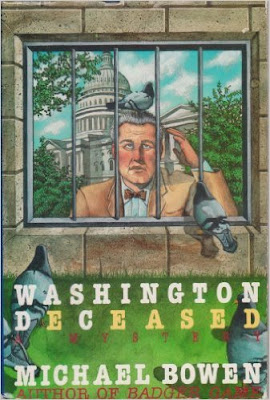 It's not for a lack of interest. In an edition of "The Jury Box," from an issue of Ellery Queen's Mystery Magazine from the early 1990s, Jon L. Breen opined that Bowen was "one of the most promising detective-story classicist to debut in the last couple of years" and his stories appears to be crammed with the kind of impossible problems haunting up the works of John Dickson Carr and Edward D. Hoch.

So, I'm not entirely sure why a self-described, unapologetic classicist, like yours truly, who can't go for more than two or three blog-posts without bringing up a locked room mystery took so long to get around this author. But that's one of those unanswerable, ponderous questions of life for you.

Washington Deceased (1990) introduces Richard Michaelson, who's a thirty-five year veteran of the Foreign Service of the State Department, all-round Washington insider and author of a slim, hardcover volume by the title of Bright Lines and Slippery Slopes: Nine Fallacies in Current Foreign Policy Discourse – which he sees being clutched at a meeting by 19-year-old Wendy Gardner.

Wendy Gardner is the daughter of an ex-senator, named Desmond Gardner, currently serving time in a Federal Minimum Security Correctional Facility in Maryland on a bribery conviction, but a chance at parole is looming on the horizon. However, a sugar-related investigation might block Gardner from tasting his freedom again. Which is why Gardner contacted Michaelson through his daughter and asked him for chat at the prison face to face.

The first half of Washington Deceased mainly consists of establishing Michaelson as a character of this series, which shows him as "brave, cool and arrogant" with a "definite idea where he wants to be when the next President comes in," but would "lie, cheat or steal to get on the right guy's short list for one of the jobs he has in mind." So, not exactly a hand-wringing bureaucrat, but a politician nonetheless.

There are, of course, some things to be said about Washington itself, or rather, the political-machine it hosts, which has (for example) the State Department spying on the CIA, because the latter was "not good at telling the State Department and Congress everything it found out" – which gave the place an Alice-in-Wonderlandesque spot of madness. Like the right hand not knowing what the left hand is doing. There were also some conversational snippets predicting a collapse of Apartheid in South Africa and a crumbling influence of the Soviet Union. 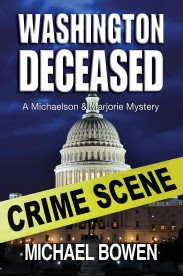 I found these parts quite enjoyable, because it placed the detective story in a different territory, but only part of the story that of interest, plot-wise, was the seemingly inexplicable locked room shooting in prison.

"Sweet" Tony Martinelli was "a thumb breaker" specialized in "labor racketeering," which exists of coaxing "union members not to be overly inquisitive about what's happening to their pension funds" and shake down employers by convincing people "not to interfere with illegal work stoppages." A charming personality who was quite out of place in the minimum secured facility housing non-violent offenders.

So it's not a surprise someone wanted an end to Martinelli's existence, but the real problem arises in answering how this unknown person managed to do it!

Tony Martinelli is shot in a locked basement supply room, numbered "B-4," with a Colt .22, which was left inside the room and the shooting was on a surveillance camera – and that's where the problems begin to arise. The only room in the window was barred, locked and framed with a metal detector-alarm and the same goes for pretty much the entire premise. There are three floor plans showing how many cameras and metal detectors are strewed around the complex, which makes it "totally impossible for any inmate" to have "left the Supply Room by any means."

The explanation for this seemingly impossible murder has flashes of originality and imagination, which possibly betrayed a love for stage-illusions on the authors part, but the complexity of the trick came at the expense of believability – evidenced by the amount of ground Michaelson had to cover to explain each step of the murder.

The murderer had to do "a whole series of things that incredibly increased the chance" of being spotted "doing something that would get him convicted of murder," which is hard to explain in a convincing manner without Murphy's Law rearing its ugly head.

You really need to calculate one or two (minor) screw-ups in order to give this kind of real-time, murderous illusions a shred of credibility, but I can easily forgive this – 'cause I love originally thought-out impossible problems. I had a much bigger problem how some of the details were half-assed such as how the murder weapon got into the facility as a whole. The answer supplied: "how does cocaine get in... how does contraband of any kind get in," followed by "no prison on Earth is airtight." Well, the solution how the pistol got into locked and metal-detector protected supply room was definitely a lot better. And puzzling along and making up false solutions was fun as well.

Overall, Washington Deceased was an interesting, if imperfect, introduction to Michael Bowen's locked room novels, which requires further investigation before giving my final judgment. I remember reading some positive things about Worst Case Scenario (1996) and Collateral Damage (1999). So one of those two will probably be the next Bowen I'll be reading.
Geplaatst door TomCat on 10/17/2015