"It is a thorn. You may pick it out. But be careful, for it is poisoned."
- Sherlock Holmes (Sir Arthur Conan Doyle's The Sign of Four, 1890)

John G.H. Vehey was a writer from Belfast, Ireland, who mass-produced crime-fiction during a relatively short period of time, from the late 1920s until his death in 1938, which was done under half-a-dozen different pennames, such as "Henrietta Clandon," "Anthony Lang" and "John Mowbray," but he was at his most prolific as "Vernon Loder" – a name that was plastered across the covers of more than twenty of his novels.

Loder is largely forgotten by the readers of today. Only a handful of genre historians, scholars and collectors, like John Norris and Curt Evans, were aware of his existence, but the genre’s renaissance era continues to bring back even the most obscure names and titles back into circulation. 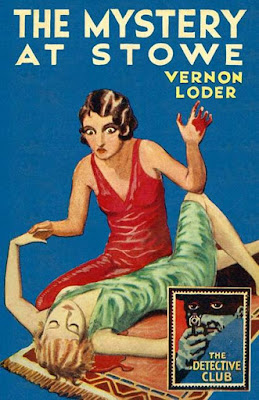 Recently, the resuscitated Detective Club, which is an imprint of HarperCollins, reissued a number of classic crime novels and Loder was one of the writers who were dragged from the bowels of obscurity.

The Mystery at Stowe (1928) takes place during one of those weekend parties that were all the rage in detective stories from the early twentieth century. The large manor-house were the party is gathered is called Stowe House and the property is in the hands of a good-natured host, Mr. Barley, who never enjoyed a good education or belonged to the upper-layers of the social strata, but he loved society and cultivating his behavior enabled him "to fill his house with decent people of the upper-middle classes" – basically people who were not bothered or shown "open scorn for the humble upbringing of their host." One of them is a well-known explorer and lecturer, Elaine Gurdon.

Elaine Gurdon is known as "the heroine of an expedition into the wilds of Patagonia" and "an enterprise which had penetrated the Chaco," but, regardless of her fame, she still has to go around with a begging bowl to finance her next trip into uncharted territory.

Luckily, one of the other guests, Edward Tollard, is a good-looking junior partner in a banking firm and he's willing to finance Gurdon's trip. However, this does not go over particular well with his wife, Margery, who fears the professional relationship might be a cover for a personal one – which is an opinion shared by two fellow guests, Mrs. Gailey and Miss Sayers, who regard the adventuress "as a poacher." So, since this is a 1920s detective story, you can probably guess the outcome of this situation.

The body of Margery Tollard is found on the floor of her bedroom. She was discovered in front of an open window and that's an important fact, because the medical examiner plucks "a dark wooden sliver," or "long thorn," from between her shoulder blades. It was taken from a quiver of poisoned darts that was hung alongside a blowpipe in the front hall as decoration. Gurdon brought them into the house and gave a demonstration how to operate, which makes her even more suspect, but the detective of story, Jim Carton, is determined to prove her hands free of both poison and blood.

Jim Carton is an old friend of Gurdon and "a bit of a policeman" himself. He served as an Assistant Commissioner in West Africa and philosophizes that "all crimes are much the same," which means they usually follow a familiar set of motives, but poison-smeared thorns are unfamiliar terrain for the English policemen – providing an opportunity to Carton to put his experiences into practice on home soil.

It's this background of the poisoned darts, blowpipes and Carton attempting to figure out alternative methods for propelling a venomous sliver of wood that lifts The Mystery at Stowe slightly above your standard fare country-house mystery from the period. Usually, I only come across these kind of detective stories in mystery novels as references, often peppered with scorn and ridicule, but this is only the second example I read that actually played around with poisoned darts and kept a straight face while doing so. Death in the House (1939) by Anthony Berkeley is the other one. Agatha Christie had some fun with blowpipes in Death in the Clouds (1935), but with her tongue firmly planted in her cheek and one of the characters even wrote Edgar Wallace-style sensational thrillers about murders with snake venom. Perhaps the best example of a detective story to employ poison-laced darts is Peter Dickinson's marvelous The Poison Oracle (1974), but that's a different story altogether.

The Mystery at Stowe is trailing slightly behind those three books, but, admittedly, Loder competently twisted together the situation, motivation and explanation in what may be to some a satisfying explanation. Yes, I have a problem with the solution. I actually have two problems with the solution: 1) I'm not a fan of this type of twist, because it feels like a cheat 2) the heart of the plot and the nature of the final twist was modeled around a famous Conan Doyle story from The Case-Book of Sherlock Holmes (1927). The title of this blog-post sort of alludes to that particular story. Anyhow...

Technically speaking, the remodeling of the plot was admirably done, but I found the ending to be depressingly disappointing and the fact that I could see beneath the fresh coat of paint didn’t do the book any favors either. I would not recommend The Mystery at Stowe to be used as bait to lure new readers to the genre, but seasoned mystery readers might want to give it look.

You can chalk this poorly written review up to my disappointment over the book. I hope to pick something better for my next read.
Geplaatst door TomCat on 4/03/2016