"There is a great deal of wickedness in village life. I hope you dear young people will never realize how very wicked the world is."
- Miss Marple (Agatha Christie's "The Blood-Stained Pavement," collected in The Thirteen Problems, 1933)

The ingenious and sardonic Anthony Berkeley was one of the founding members of the London-based Detection Club, who foresaw and participated in the popularization of the psychological crime novel, which he did under the byline of "Francis Iles," but he's primarily remembered today as one of the more original and innovative minds from the genre's classical period.

Berkeley's ingenuity sprang from a cunning mind that was willing to experiment with the form of the detective story and embrace new ideas. This is very evident in the characteristics of one of his series characters, the energetic Roger Sheringham, who's one of the most likable amateurs to ever don the figurative deerstalker, but as prone to fingering the wrong culprit as the reader – which also makes him one of the most relatable detectives in the genre. Sheringham snugly fits the mold of "the fallible detective," which was cast by E.C. Bentley in Trent's Last Case (1913), but Sheringham was unparalleled when it came to being wrong (e.g. The Poisoned Chocolates Case (1929) and Jumping Jenny, 1933). 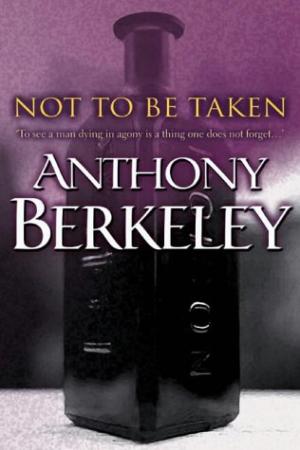 Just like Sir Arthur Conan Doyle and G.K. Chesterton, Berkeley has a number of tricks, plots and storytelling ideas to his credit that were adapted and turned up in the works of other writers: a false solution from Roger Sheringham and the Vane Mystery (1927) fuelled the plots of some well-known detective novels by John Dickson Carr, Nicholas Blake and Edmund Crispin. The basic plot-structure of The Silk Stocking Murders (1928) became the basis for Agatha Christie's The ABC Murders (1936) and Panic Party (1934) seems to have been the model for And Then There Were None (1939) and William Golding's Lord of the Flies (1954).

These influential works are accompanied by some excellent, first-rate detective stories such as The Piccadilly Murder (1929), Jumping Jenny, Trial and Error (1934) and the subject of this blog-post – a splendidly written, cleverly plotted and well characterized tale of a poisoning case in a small village that would have made Christie proud.

Not to Be Taken (1938) is a standalone novel and is narrated by Douglas Sewell, a fruit farmer and a countryside gentleman, who notes halfway through the story that, if his account "is to be considered as a detective story," he's telling it quite wrongly. As he had only just reached "the point at which a detective story usually begins," but reconstructing the recent past and bringing "the dead to life again in all the trivial details of everyday life" is necessary for assigning the roles for the engaging, fully fledged cast of characters who are about to play a part in a small-scale drama. Berkeley was not only a shrewd plotter, he also knew how to write a story around those plots populated with fairly convincing characters.

The narrative spun by Sewell begins with his next door neighbors, the Waterhouses, where the first signs of a domestic tragedy begin to manifest themselves.

John Waterhouse is a retired electrical engineer with a distinguished career behind him as "a kind of roving contractor," who was known, particularly in the East, as the man to call "when any native ruler with plenty of money" and "yearning for bright lights" was contemplating to wire his jungle capital – which resulted in several adventurous episodes and a respectable bank account. He settled down in the small village of Anneypenny, Dorset, to please his wife, Angela, but the restless workhorse soon picked up a hobby: masonry and construction.

Construction is a useful pastime that provides the villagers with work and extra money, but Waterhouse has never been a penny-pincher, which made him a popular figure in Anneypenny. However, when the story opens, "the embodiment of robust health" has fallen ill and has been plagued with severe bouts of indigestion. The cause of the illness is placed on a developing gastric ulcer and his doctor advised him to cut down on his smoking, follow a diet and take his medicine. But that was to no avail: he "died a painful and a messy death" after a sick bed of five excruciating days.

His doctor and a close friend of Sewell, Glen Brougham, was somewhat surprised, but signed a death certificate stating epidemic diarrhoea as the cause of death and Waterhouse would have been buried as one of those many examples, littering graveyards everywhere, of an unfortunate soul who passed away before his time – if it weren't for the interference of his brother.

Cyril Waterhouse is very skeptical towards the official cause of death and Sewell wonders whether he had picked up grains from the local rumor-mill, before deciding to descend on the village, but a post-mortem examination supports his suspicions.

A quantity of arsenic is discovered in the body of John Waterhouse and this casts a wide net of suspicion. Cyril strongly suspects his sister-in-law, Angela, who's the sole beneficiary under her husband's will and can look forward to a fat paycheck from his life insurance – which is as good a motive for murder as her extra-marital affair. It’s also suggested Glen Brougham might have made a mistake in preparing the prescription, which would make it manslaughter and might cost him his career as a physician. The Waterhouses employed a German woman, Miss Mitzi Bergmann, who acted as a companion-secretary to Angela and was often ragged by John about the Nazi system, but on the eve of the inquest she flees from the country.

These are just a handful of the possible combination arising from the character-driven prelude of the first half and an examination of the hard facts during the inquest in the second half, which also involves Sewell himself, his wife, Frances, and the doctor’s sister, Rona. Before the final chapter, Berkeley threw down the gauntlet and wrote an Ellery Queen-style "Challenge to Reader," which asks several questions pertaining to who and how John Waterhouse was poisoned – as well as asking the reader if he thinks if the story contained, what he called, a "Dominant Clue." Berkeley delivers on the promise given by the premise and the tantalizing challenge, because the explanation is very clever and satisfying. I completely missed the central and dominant clue, but was pleasantly surprised to see the murderer give the kind of response I always wanted to see a murderer give to an old-fashioned deduction. However, I do not think this one really deserved to get away with it.

The final sentence closed the book on a note that was so unusual, unconventional and open-ended that it can only be described as stereotypical Berkeley. It was good and strong enough for Nicholas Blake to use it as an ending for his admitted masterpiece, Head of a Traveller (1949). So there's another piece of work seemingly inspired by Berkeley.

So, all in all, Not to Be Taken is another example of why Berkeley remains such a popular writer among connoisseurs of vintage crime-and mystery stories: he simply was one of the best.
Geplaatst door TomCat on 3/28/2016