"There's something very convincing about a bow and arrow, but really, when you come to think of it..."
- Sgt. Beef (Leo Bruce's "I, Said the Sparrow," collected in Murder in Miniature and Other Stories, 1992)

Rupert Croft-Cooke was the birth name of "Leo Bruce," writer and satirist, who penned a string of clever genre spoofs about a beer guzzling and darts playing village constable-turned-private investigator, but the novels about Sgt. Beef covered only a small portion of his total work – eight novels and a smattering of short stories stretched out over a period of sixteen years. Bruce was far more prolific with his secondary and lesser-known series about a schoolteacher and "a free-lance amateur" in the game of detection, Carolus Deene.

Deene took on the detective duties in twenty-three mystery novels, which were published between the mid-1950s and the early 70s, but they're a far cry from the inventive, tongue-in-cheek parodies of the genre that made up the Sgt. Beef series. They're more attuned with the darker mood and morose tone of the genre post-World War II. 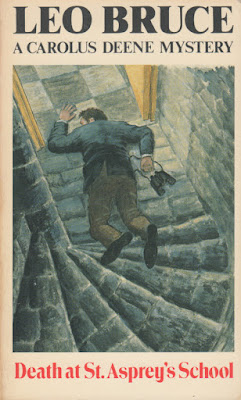 Some years ago, I sampled one of the volumes from the Deene series, Death in Albert Park (1964), but I was repelled by the gloomy ambiance, plodding storytelling and a plot that was lifted from a rather famous mystery novel – i.e. Agatha Christie's The ABC Murders (1936). Granted, I probably should not have read Death in Albert Park on the heels of Bruce's masterpiece, Case for Three Detectives (1936), but fact remains I was disappointed enough to angrily dismiss the entire series as bottom-of-the-barrel material.

I found an old comment on the GADetection Group, by Curt Evans, responding to my dismissal of the series by stating that in his view "reading the Deene books would be desperately scraping the bottom of the barrel" and how "Academy Chicago does not publish barrel scrapings" – followed by an assurance that "some of the Deenes have ingenious twists." Well, this was not the only instance in which someone, whose opinion on the detective story I hold in high regard, pleaded in favor of this series. So why not finally take that postponed second look at the series. I wanted to read something by Bruce and reading a Carolus Deene novel would prolong the inevitable end to the Sgt. Beef series, of which there only two more left on the big pile of unread detective stories.

The novel I picked to reacquaint myself with Carolus Deene was Death at St. Asprey's School (1967) and there were two reasons for that: I love a scholastic setting as much as a shipboard or war-time mystery and the plot description promised something along the lines of Gladys Mitchell's Tom Brown's Body (1949).

St. Asprey's Preparatory School is a private and expensive boarding school for young boys of high repute, but, lately, a chain of "ugly and frightening events" has plagued the place. Several of the students, "serious youngsters of twelve and thirteen years," swore they saw a figure they variously called "the Monk, the Old Friar or the Abbot," who has been described as a bearded man in gray passing through the dormitory like a ghost – while "mumbling Latin." Footsteps had been heard at night and lights had been "seen moving about the grounds."

Ghosts, lights and footsteps are something the teachers could have coped with, but soon the "satanic figure" became more "hostile and corruptive." Six rabbits were brutally battered to death in their hutch and a fox terrier puppy got its throat cut in the stables. It was obvious to everyone "some tragic event was pending," but nobody could have foreseen it was an attempt at murdering one of the teachers!

Colin Sime is one of the assistant masters and is very popular among the boys, but not with his colleagues in the common-room and he, miraculously, survives tumbling down a narrow, worn-out spiral staircase in an old church tower – which escaped only with a broken leg. However, Sime swears he was pushed and an aspiring killer could potentially ruin the reputation of the school. So they call in an expert to take over Sime's classes.

Carolus Deene is described as a slim, adolescent looking widower in his forties and the owner of a large private income, which made teaching and playing detective merely occupations to kill time "because he could not live idly." He had already established a reputation for himself as an amateur sleuth by the time the St. Asprey's School business presented itself, because it's asked of him if he could elucidate the matter without a murder. Usually, a murder or two before Deene successfully reaches the end of an investigation.

Sadly, for the victim, Deene is unable to prevent a second and far more successful attempt on Sime’s life: who's found propped up in his bed, in front of an open window, with the shaft of an arrow embedded in his throat. Interestingly, the practice of archery provided the best aspects for both the plot and storytelling. Archery is all the craze at the school and everyone is practicing it, which made sure there were enough people around when the deadly arrow was loosened, but there were also interesting scraps of background information on the sport – complete with the obligatory references to both Robin Hood and William Tell.

The method for the murder is a reworking of a short story from Bruce's very own Murder in Miniature and Other Stories (1992) and the idea had been previously explored by G.K. Chesterton and John Dickson Carr, but the trick was competently presented and pulled off in this version. Surrounding this trick is a rather common place, garden-variety plot: a blackmailing victim who received his comeuppance, but my main complaint is how the interesting plot-threads, ghostly figure and animal killings, were relegated to the background – instead of being played up to their fullest in order to dress-up and distinguish a simplistic, standard and shopworn plot. Like the archery elements and snippets of school life did for the story, which were my favorite parts of the book.

So, to cut this already overlong review short, I would say Death at St. Asprey's School was a better reading experience than Death in Albert Park, but I still would not place it anywhere near to the Sgt. Beef series. I probably should have read one of the titles that were actually recommended to me, such as Furious Old Women (1960) or Nothing Like Blood (1962), but they were not within reach of my covetous claws. However, I'll keep them in mind for when I'll return to this series, but, for now, I'm still a Beef kind of guy.
Geplaatst door TomCat on 3/24/2016