"A sensitiveness to fair play and sportsmanship is perhaps the best protection against the abuse of power..."
- Robert H. Jackson

During the first two weeks of this year, I reviewed three of the five mystery novels in the Anthony "Algernon" Vereker series, The Pleasure Cruise Mystery (1933), The Ginger Cat Mystery (1935) and The Spirit Murder Mystery (1936), which were recently reissued by the Dean Street Press – prefaced with a new introduction by genre historian and professional detective-fiction enthusiast, Curt Evans.

Robin Forsythe was the man who put his name to these forgotten gems and began to work on this short-lived series, clipped short by his death in 1937, while serving a prison term for his initial poke at contriving a criminal scheme. In the end, it proved far more profitable for Forsythe to confine his cleverly contrived schemes and tricky plots to the printed page. You can find some details about the Somerset House stamp case in my review of The Pleasure Cruise Mystery and Evans' introductory piece to his work, but that's ground I have trodden before. So lets move on the subject at hand. 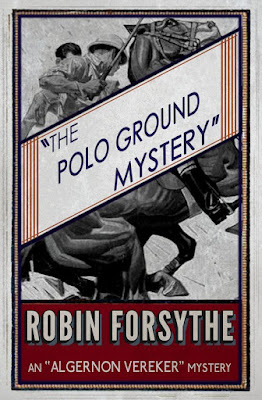 The subject of this blog-post is the second novel in the "Algernon" series, The Polo Ground Mystery (1932), which opens with a newspaper report on the mysteries enshrouding Mr. Sutton Armadale's death – a rather well-known and wealthy financier.

A mortally wounded Sutton Armadale was found on the private polo grounds of his palatial home, Vesey Manor, during the early hours of the morning: bleeding from a gaping gunshot wound in his abdomen region and a second bullet had gone clean through the head. Armadale was tightly clasping an automatic pistol, but suicide seems an unlikely explanation for the shooting. The gamekeeper who came across the body, Stephen Collyer, heard his employer murmur one last word, "murder," before drawing his last breath of air.

It was "subsequently discovered that the secret safe in the library," which was not as secret as it should have been, had been rifled and a "famous rope of pearls" had been taken – a rope that had been valued at a cool 20,000 pounds. A mask was found on the floor of the library. So it's entirely possible Armadale could have been gunned down while pursuing a burglar, but the strew of people who surrounded the victim could all be fitted in the role of murderer in half a dozen possible scenarios.

The stolen pearls belonged to Armadale's second wife, Angela, who treated him more as "a rich fur coat than a husband," which is why everyone considered them to be "an ill-matched pair." Evidently, Armadale agreed with the general opinion about their marriage, because he left everything he owed to his nephew, Basil Ralli, who was rather surprised since his uncle disapproved of his fiancé – wanting him "to marry some one of good birth." The fiancé is the daughter of the gamekeeper, Miss Trixie Collyer, who has a disgruntled admirer, Frank Peach, in the former underkeeper of the estate. But he was released from his duties by Armadale. There was also a "small party of guests" present at the manor, which included a Belgian cabaret singer, Miss Edmée Cazas, a well-known polo player, named Captain Fanshaugh, Mr. Ralph Degerdon, Mr. Aubrey Winter, who's a cousin of Mrs. Armadale, and one of her friends, Stanley Houseley.

Shooting happened against the backdrop of a financial crisis, known "The Great Brady Crash," which left "a hideous trail of suicides by poison, coal-gas, disinfectants, fire-arms" and "cold water," but, sadly, had little bearing on the overall plot – otherwise I could have padded this review with references to E.C. Bentley's Trent's Last Case (1913) and Cyril Hare's Tenant for Death (1937).

Well, that’s how the situation stood when Anthony "Algernon" Vereker, gentleman artist, appeared on the scene as a special representative of the Daily Report and "as a sort of unofficial helper" of Detective-Inspector Heather of Scotland Yard. But they generally go about as friendly rivals with different approaches. Vereker prefers to find out "why the crime was committed and thence by whom," while Heather tries "to discover how the crime was committed and thence by whom," but, as is common in Forsythe's work, the beating heart of the plot were the mystifying circumstances in which the body was found.

Who and why are as important as in any other traditionally plotted detective story, but the answers to these questions are always provided by clearing the confusing surrounding, what I call, the "crime-scene conundrums," of which Forsythe was an absolute master. In The Pleasure Cruise Mystery, it was the sudden death of a woman whose gloved-covered hands were inexplicably cut and bruised, while The Spirit Murder Mystery confronted the reader with two bodies in a barren field – one of them with a crashed skull and the other with non-fatal gunshot wound. Forsythe spun some clever, twisted and original plots from these premises, which is no different here.

Vereker and Heather realize the murder of Armadale was not an ordinary shooting, because they're not even sure how many shots were fired or even how many firearms were involved. And then there’s the original motive for the shooting. A motive that sprang from a tense situation on the polo ground. So the combo of the murderer, motive and opportunity was very well done, which is something I have come to expect from Forsythe. Same can be said about the characterization and the witty dialogue. But I still had a problem with the overall story: it seemed too long. Like an overextended short story.

Yes, I said the plot was clever and original, which it is, but not on the grand scale as the previously mentioned Forsythe mysteries and even with a questioning half a dozen suspects, burglary sub-plot and a friendly rivalry there was still time for Vereker to loiter around the grounds – even having time to make charcoal studies of the woods. It's even mentioned in one of the chapters that, as a landscape painter, Vereker was having a wonderful day. Even the busman's holiday-type of mystery novel usually don't allow the detective that much leisurely time. So the opening and ending chapters were really good, but the middle-section had patched that looked suspiciously like padding. Very well written pieces of padding, but padding nonetheless.

To make a long story shot, Forsythe is an early contender to be my best discovery for 2016, but that’s mainly on account on the three previously reviewed titles, which were really excellent examples of classic, Golden Age mysteries. Again, not that The Polo Ground Mystery was bad, but not as good as the other.

Well, that only leaves Missing or Murdered (1929). I sure hope the Dean Street Press will not wait too long with reissuing Forsythe's three standalone mysteries. I'm particularly interested in Murder on Paradise Island (1937). Sounds like a blast.

Anyhow, I'm not sure when the next review will be posted, but I can tell you it will be tangibly related to my favorite mystery writer.
Geplaatst door TomCat on 3/09/2016