"Philately... is a curious hobby. It seems to afflict its victims with a species of mania. I don't doubt these stamp-collecting fellows would murder each other for one of the things."
- Ellery Queen (Ellery Queen's "The Adventure of the One-Penny Black," collected in The Adventures of Ellery Queen, 1933-34)

Harriette Ashbrook, who also wrote under the penname of "Susannah Shane," was an American mystery novelist from the genre's Golden Era, but one who was, reportedly, overlooked, forgotten and overshadowed when she was still plying her trade – which makes her output one of the more neglected nooks in the genre. It must have been a glumly, unprofitable honor for Ashbrook, but we get to explore an author a large swath of mystery readers in the 1930s missed out on. That's one of the perks of ferociously consuming detective fiction in the 21st century. 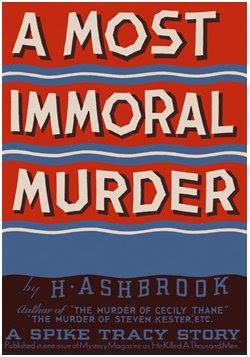 Anyhow, the page for Ashbrook on the Golden Age of Detection Wiki says she "was never taken seriously in the mystery arena." She never garnered any of favorably reviews, which led to her being ignored by leading paperback houses, but there's been one modern critic who spoke kindly about her work in the field – John Norris from Pretty Sinister Books. Well, that's a good enough endorsement for me!

John notes in her Wiki article how her early books "show an obvious love for the genre" with lively characters, realistic detection, insight into forensic police work and a smart-aleck playboy detective "who is much more interesting and funny than Philo Vance." Her later books, which were published under the name of "Susannah Shane," warranted a "comparison with Alice Tilton and Craig Rice," but the plots "often surpass the story mechanics of those two better known writers." You can find a closer examination of some of those plots in an insightful blog-post, The Detective Novels of Harriette Ashbrook, which had some encouraging words for A Most Immoral Murder (1935) and again mentions how the detective was "one of the better Vance impersonators" – something I have to agree with.

A Most Immoral Murder was originally published as He Killed a Thousand Men in the July 1935 issue of Mystery Magazine, which was a periodical that was exclusively sold in Woolworth stores. Later in that same year, it was published as a proper book and began its long, undeserved descend into obscurity.

We find the detective of this forgotten series, Philip "Spike" Tracy, in a similar mood as Sherlock Holmes in "The Adventure of the Bruce-Partington Plans," collected in His Last Bow: Some Reminiscences of Sherlock Holmes (1917), which is in a state of complete and utter boredom. Spike has engaged the services of a battered prize-fighter to act as a Wodehousean butler and combat the tediousness of everyday life, but the monotonous spell is only broken when Pug Beasley answers the door to find drenched, wild and haggardly looking woman on the doorstep – who promptly collapses and is put to bed immediately.

The woman turns out to be Linda Crossley and the police are very interested in her whereabouts, because she has been missing ever since her grandfather was found hunched over a desk in his private library. A dark stain on his back proved to be blood from a deep stab wound.

Prentice Crossley was an avaricious collector of rare and desirable stamps, whose collection was worth a queen’s ransom, but were they worth enough to someone to kill over? Apparently, that appears to be the case, because "more than $85,000 worth of stamps are missing" from the collection. Amazingly, that prize-tag represents the combined value of only a handful of stamps! There's also a string of interesting snippets of background material on stamp collecting and the history of stamps, such as "howlers," which are "stamps with crazy mistakes in them" like "ships with their flag blowing against the wind." So I probably learned something from this book. 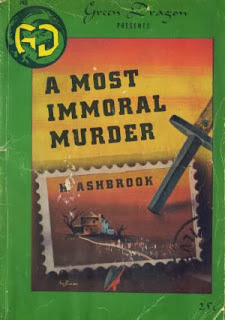 However, it's not just the philatelic element and the presence of collectors that firmly plants the book in the Van Dine-Queen School of Detection, but also the fact that Spike Tracy is the younger brother of the District Attorney – which provides him with access to the crime-scene and detailed information on the case. You can compare this to the father-and-son team of Ellery Queen and Inspector Richard Queen or a similar combination of siblings from Amelia Reynolds Long's Death Has a Will (1944), in which a lawyer, by the name of Stephen Carter, assists his brother, Jeff Carter, who's a District Attorney.

It's the combination of Spike, his brother and Inspector Herschman, "head of the homicide squad," who take a closer look at the small group of people who surrounded the victim in life, which includes his lawyer, John Fairleigh, a dealer, named Kurt Koenig, Jason Fream of the Acme Stamp Company and Homer Watson – who was "known in philatelic circles as a keen rival of Crossley." But another element is introduced to the story when the murderer strikes a second time.

An elderly woman, Mrs. Deborah Ealing, is found stabbed to death in her apartment. The weapon is a bayonet and identified by her daughter, Maysie Ealing, as a war souvenir from her long-lost brother, who never returned from the war, but what tied both crimes together is a rare stamp in the dead woman's hand. However, this new element has to do with the long shadow cast by the events in the First World War and how it affected those who fought in its trenches, but, in combination with the stamp business, it provided a surprisingly original and interesting motive for a double murder. I could not think of a similarly motivated detective novel from the Golden Age.

The only problem is that, while you can figure out the identity of the murderer, gauging this characters original piece of motivation is a lot harder, but I find that a forgivable offense – in this particular case anyway. I had a much bigger problem with the colossal and cosmic coincidence that, from all the houses, Linda Crossley accidentally stumbled into the humble abode of Spike Tracy. Or how Spike covered up the murders. I can understand the sympathy one might feel towards this murderer and understand this persons motivation, but is it really an excuse to plunge a bayonet in the back of an old lady?

Anyway, I was still impressed how Ashbrook linked the horrifying ordeals suffered in the trenches to such an innocent hobby as stamp collecting, an old photograph, a newspaper advertisement and a family secret, which made for an interesting and original mystery. I have mentioned in the past how detective stories closely tied to the World Wars hold my interest, but tales in which the Great War has a strong presence are very sparse in comparison to the World War II era mysteries. The only other example I can think of, in which the First World War has such a presence as in A Most Immoral Murder, is Was it Murder? (1931) by James Hilton.

Guess I'll end this review here and recommend A Most Immoral Murder to fans of S.S. van Dine, Ellery Queen and Clyde Clason. If you enjoyed those writers, you'll enjoy Ashbrook. And if any of her books were like this one, she definitely got the short end of the stick in her lifetime.
Geplaatst door TomCat on 3/06/2016