The professional career of Sir Basil Thomson was as rich and varied as a vividly colored, intricately patterned tapestry and its textural richness included such snapshots as stints as a colonial officer, prison governor, intelligence officer, Assistant Commissioner at Scotland Yard and working alongside the Prime Minister of Tonga – according to some "he was the Prime Minister of Tonga." During his time on these jobs, he was a thorn in the side of the suffragettes, spies from Imperial Germany, Irish nationalists and British Marxists.

So with such a résumé, we can be forgiven for not remembering Thomson was also one of the pioneering minds of the English police procedural during the detective story's Golden Age. 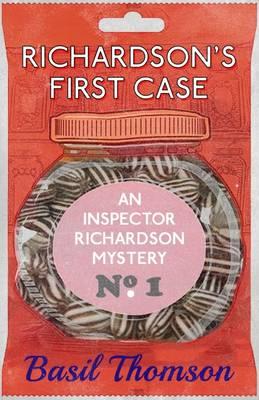 Fortunately, the Dean Street Press is in the process of filling this gaping lacuna in our collective memory by reissuing all of Thomson's police novels about Inspector Richardson, which tell the story of a Scottish policeman "climbing through the ranks of Scotland Yard." All of these eight books are clad in softly colored, uniformly designed book covers and are introduced by an accomplished crime novelist and genre historian, Martin Edwards. You can read more about Thomson's fascinating life in Edwards' introduction, which includes interrogation of Mata Hari, Roger Casement and a sensational conviction for "an offense of indecency" in Hyde Park – resulting in a fine of five pounds! But lets move on to the first book in a series that was praised by Dorothy L. Sayers, Jacques Barzun and Wendell H. Taylor.

Richardson's First Case (1933) begins on a wet, misty and depressing November afternoon in Baker Street where a young policeman, P.C. Richardson, is standing at his post. The "stream of traffic" had "splashed him with mud to his knees," his waterproof cape glistened with moisture and he "was wondering how he could win admission to the Criminal Investigation Department," but even he would probably have been surprised if he knew the traffic accident he was about to witness would offer him an escape from the humdrum routine of the uniformed police constable.

An old man, who "dashed across as if the devil was after him," got blindsided by a car and looked like "a bundle of old clothes" entangled with "the spring and the front axle." One of the witnesses on the pavement heard him say, "very well, then, I'll call a policeman," before dashing off, which complicated an apparent simple traffic accident – nor would it be the last complication in the case.

The name of the victim, who died on his way to the hospital, was John Catchpool. He was a registered moneylender and a shopkeeper of an antique store, who "had many other irons in the fire," but what they find in his store completely convoluted the whole matter.

What they found inside the store of the old man is the body of his wife, Mrs. Catchpool, who was strangled to death and the problem that arises from this discovery is a decidedly classical one. John Catchpool has a will that leaves everything to his wife and her beneficiary is a nephew, a naval officer called Lieutenant Sharp, but if his wife died before he did everything would go to his nephew upon his death – a man by the name of Herbert Reece. So the will provides both cousins with a potential motive for murder and asks the question of who died first, but there are more suspects to consider.

Richardson found a slip of paper in the clothes of Catchpool, which bore the name and address of Arthur Harris, "a thin, weedy kind of youth," who has a fondness for drinking and reckless driving. Harris initially denies even the slightest acquaintance with Catchpool, but the old moneylender's ledger shows an entry in Harris' name for an outstanding loan of two hundred pounds. A second, potential suspect from the outside comes in the guise of a shivering, broken-down wreck of a man, named Frank Cronin, who's an artist and a picture-cleaner who illegally pawned an interesting picture that he was supposed to clean. The picture depicts a bunch of "licentious Spanish soldiers," during the occupation of the Low Countries, murdering and raping "the virtuous Dutchmen in the village" – which is burning down in the background. I wager it's a depiction of the Siege of Oudewater, but that’s a side observation.

So there's enough to investigate for the police, but where Thomson's crime-fiction differed from his contemporaries is the emphasis on teamwork and police procedural. As Edwards pointed out in the introduction, "such as focus on police team-working is very familiar to present day crime fiction fans," but it was a fresh and novel approach to the detective story in the 1930s. I have read about James Oliver Curwood who wrote books about the Mounted Police in the Canada of the 19th century, which reputedly blends elements of the police procedural with tracking-type of adventure/mystery stories in frozen, untamed lands. However, the comparisons seem superficial. Craig Rice had her detectives operate as a team, but they were amateurs from the forties with no regards for proper procedure and rules. So Thomson really was an innovative writer during the thirties, because this type of crime-fiction would not gain traction until the 1950s when such writers as Ed McBain began to carve a name for themselves.

I really found it interesting to see a series characters from a Golden Age police series start out as uniformed constable, pounding pavement, who slowly begins his rise in the ranks and is told by his superior to "apply for the plain-clothes allowance." Retrospectively, it seems so logical to use a police force as a series "character," but it goes to show how strong a precedent Auguste Dupin and Sherlock Holmes were for the genre.

I've one complaint to make about Richardson's First Case, which concerns the rather abrupt ending to the investigation. Richardson arrested the murderer and found a key-piece of evidence in the murderer's possession that this person was conveniently carrying around. The explanation also made a lot of the interesting plot-threads inconsequential to the actual solution, which was disappointing, but, as a whole, the book was very interesting – especially as a predecessor of the modern police procedural.

Anyway, I'll definitely return to this series for a second look, because my interest has been piqued in one particular title, The Millner's Hat Mystery (1937), which provided a clever idea for Operation Mincemeat during the Second World War. The introduction also kindled my interest in Frank Froest's The Grell Mystery (1913). So, choices, choices, choices!
Geplaatst door TomCat on 3/21/2016