The Hog's Back Mystery (1933) by Freeman Wills Crofts

Freeman Wills Crofts was one of the earlier Golden Age mystery writers and he was among the first whose work was resurrected in the early 2000s, courtesy of House of Stratus, before slumping back into obscurity again – until fifteen years later when the British Library Crime Classics and Collins Crime Club began reissuing his work en masse. Collins Crime Club is going to publish six more long out-of-print titles in Crofts' Inspector French series concluding in September with the reprint of his eagerly anticipated locked room novel, Sudden Death (1932). 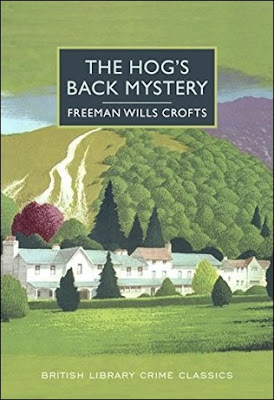 So I wanted to remove one, or two, older reprints from my to-be-read pile before adding new ones to it and decided to finally take a shot at The Hog's Back Mystery (1933). One of those simon-pure jigsaw puzzle detective novels with a plot that, sort of, flirts with the impossible crime story.

The Hog's Back Mystery, published in America as The Strange Case of Dr. Earle, takes place in "the heart of wild Surrey," with "the spine of that curious narrow ridge known as the Hog's Back" in the background, where the retired Dr. James Earle settled down with his wife, Julia, in a typically English cottage – all around it was the woods. Giving the cottage that it might be "the only dwelling in the world." This where the Earles have decided to life a quiet, docile existence with Dr. Earle working on his manuscript on germ cultures and Julia buzzing around the place doing the household chores.

So, to liven up the place a little, Julia invited two guests to spend a short holiday at the cottage. Marjorie Lawes is Julia's unmarried sisters who lives most of the year abroad and churns out reams of sentimental love stories as a living. Ursula Stone is their childhood friend and the honorary secretary of a children's hospital in Bath, but she's the one who discovers that there was no love between James and Julia. They merely tolerated each other "in the spirit of trying to make the best of a bad bargain." What's more, Ursula discovers that Julia is probably involved with her next door neighbor, Reggie Slade. And even the mild, elderly James seems to be involved with a much younger woman dressed entirely in gray. This little, dime-a-dozen domestic intrigue turns out to be foundation for an extraordinary and baffling string of inexplicably disappearances.

On a Sunday evening, Dr. James Earle was seen sitting, before the fire, with his house slippers on and reading a newspaper, but, three minutes later, the newspaper was on the chair and he was gone – vanished without a trace with no hint of cause or method. Dr. James Earle had been spirited away! The way in which he disappeared was like "seeing the impossible happen before one's eyes."

Granted, the disappearance of Dr. Earle is not exactly an impossible crime, but, as Inspector French soon discovers, the case is as baffling and complex as the most intricately plotted and executed locked room mystery. The first disappearance seems simplistic enough with having to decide whether Dr. Earle had disappeared voluntarily or had been murdered, which appears to be answered when French discovers the woman-in-gray had also disappeared without a trace. French is not satisfied with this answer and the way in which he reasons the pros and cons of the various possibilities showed Crofts had great respect for the intelligence of his readers. 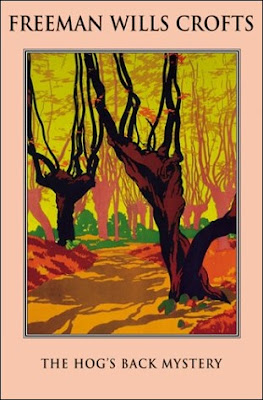 Every possible scenario and lead is discussed, closely examined and followed to its logical conclusions, which, on more than occasion, turns out to be incorrect and the reader is shown, through French's reasoning, why he had been wrong – right down to the last detail. French might not be an eccentric scientist-detective or an amateur reasoner of some celebrity, but his performance here, alone, makes him one of the Great Detectives of the Golden Age. The way in which French tries to get a firm grasp on the problems is a sheer joy to read, if you like your detective stories pure and undiluted with any literary pretensions. The Hog's Back Mystery is an exercise in rationality and stubborn, dogged determination.

Something else to admire about The Hog's Back Mystery is that the central problem keeps developing and expending the number of combinations and possibilities. You won't appreciate the full scope of the problem until a third person vanishes from an upstairs bedroom with people sitting in the room below, but it is this disappearance that provides French with the (physical) clues needed to force a much-needed breakthrough. What he discovers makes him determined to ensure the person responsible will pay "the heaviest penalty that the law allowed."

All of that being, I fear some readers will struggle with the slower, more plodding, final quarter of the story, particularly the last chapter, which hinges on timetables and movements of the suspects used to destroy a sturdy alibi. Don't worry. You're not expected to do any math homework. French is there to walk you through it.

The Hog's Back Mystery is an intelligently plotted and surprisingly charmingly written detective story. A little plodding in parts, perhaps, but I think it helped the story here as you can't help sympathize with French as he continues to plug away at a seemingly insoluble problem using little more than clear, honest reasoning and humanity's famous, mule-headed stubbornness. Needless to say, I loved the result.
Geplaatst door TomCat on 6/30/2020