The Renaissance Era of Detective Fiction

Martin Edwards is a British crime writer and author of an upcoming book, The Golden Age of Murder (2015), discussing the London Detection Club and examining "the mystery of the writers who invented the modern detective story." 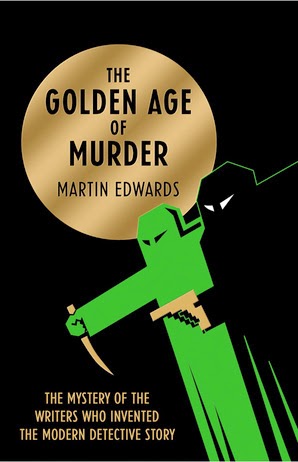 Do You Write Under Your Own Name is Edwards' personal blog, represented here on the blog-roll of Insightful Informants, and two interesting posts appeared on there recently – concerning a resurgent interest in the Golden Age of Detective Fiction.

The first post, "And the latest runaway bestseller is," considers the unexpected success harvest by the British Library Crime Classics with the republication of Mystery in White: A Christmas Crime Story (1937) by J.J. Farjeon. We'll leave it to the scholars to debate who was more obscure, the book or its author, but the reprint of this long-forgotten mystery novel sold over 60.000 copies! The second post, "Golden Age reflections," asks the opinion of the blog-readers of why a rival of the classic crime novel is happening now.

Well, I believe it's been happening, slowly but surely, for a while now and began when the internet offered a free and open market place to small, independent publishing houses. Rue Morgue Press, House of Stratus and Crippen & Landru began in the early 2000s with reintroducing then forgotten mystery writers such as Glyn Carr, Anthony Berkeley, Torrey Chanslor, Craig Rice, Joseph Commings, Kelley Roos and Freeman Wills Crofts. It steadily expanded the available material to readers of Golden Age fiction beyond the shelves of secondhand bookshops and rummage stores.

A notable success story of these reprints is Gladys Mitchell, whose output was largely forgotten and next to impossible to find. That was until the Rue Morgue Press began reprinting some of her work, such as Death at the Opera (1934) and When Last I Died (1941), while Crippen & Landru collected all of Mitchell's short stories under the title Sleuth's Alchemy: Cases of Mrs. Bradley and Others (2005). Minnow Press reproduced a handful of expensive, hardcover edition of some of the harder to find titles in the Mrs. Bradley series. That was a decade ago and since then multiple publishers, big and small, republished nearly every mystery novel the prolific Mitchell wrote in her lifetime – and most of them were expensive collector items only a decade ago!

The secondhand book hawkers of the internet market place also did their part in putting little known, long out-of-print detective stories back in the hands of readers, which made collecting vintage mysteries look really easy. However, I'll grudgingly admit that the growing popularity of e-readers and a growing catalogue of public-domain titles may've drawn a serious crowd of new readers to our genre. The names in the public domain are monuments of the transitional period between Sherlock Holmes with his Rivals and the Golden Age: Sir Arthur Conan Doyle (Sherlock Holmes), G.K. Chesterton (Father Brown), Maurice Leblanc (Arsène Lupin), Jacques Futrelle (The Thinking Machine) and R. Austin Freeman (Dr. John Thorndyke). To name just a few. And their books are free or offered in bundles for pennies on the dollars.

Now juxtapose all of that to the stale, rigidly state of the contemporary crime novels topping the "Crime Bestseller Lists" for the past 20-30 years. The crime novel with cover art besieging you to consider it proper literature, exploring the criminal nature of mankind in a series of mini-biographies of the characters, guaranteeing a book bound with more substance than its plot. What about the character-driven series of police procedurals with a troubled cop or the literary thrillers in the hardboiled vein with a jaded protagonist. It's the same old, same old, come-and go realism critics have been raving about for decades and chugging awards at for "Transcending the Genre," character exploration and prose that's probably "stone-cold" or "ultra-modern."

I believe the entrenchment of the contemporary crime novel, together with its tropes and clichés, while pretending to be the only game in town, is what kept drawing a bigger audience of readers to the detective stories of yore – offering even a wider variety of crime stories than its modern counterpart. Whodunits, howdunits, locked room and impossible crime stories, thrillers of all stripes, rogue stories, forensic mysteries, suspense, gothic romances, socially aware detectives, comedy of manners, spy intrigues, "Had-I-But-Known," historical mysteries, parodies and pastiches, hardboiled, softboiled, adventure-hybrids, SciFi-hybrids, early police procedurals, juvenile mysteries, etc. I think the abundance of short stories produced during the Golden years are being appreciated all over again by modern readers, because you can easily read one or two stories on the train or bus to kill the time.

From a consumer's perspective, it's completely understandable why these stories have become interesting again. They offer the reader a genuine choice and a majority can be downloaded with a swipe of a finger on your e-reader, of which a significant portion is in the public domain – completely free-of-charge. How can those stale, dime-a-dozen "Literary Thrillers" and "Crime Novels" compete with that?

Personally, I hope this expanding interest in the classics is a response to the postmodern deconstructivism, which is at the root of the contemporary crime movement, because I believe we're leaving that period behind us. What's left to deconstruct? Even the major prizes are given out to writers only marginally associated with the genre. So why would readers put up with the same themes being crammed down theirs throats how the world can be a dark, violent and unfair place swamped in corruption and deceit. That message has been duly noted over the past 15 years.

Maybe that's really why readers are turning to books enthusiastically shouting, "c'mon, what are you waiting for? The game's afoot!," instead of the ones depressingly asking "what's the point." Times and attitudes have changed. The meme "born too late to explore the world, born too early to explore the universe" won’t be an epitaph for the 21st century, but a challenge that was met. We'll colonize the hell out of the Moon and Mars like the descend of Imperial Europe on the New World!

Email ThisBlogThis!Share to TwitterShare to FacebookShare to Pinterest
Toe-Tags: Random Stuff, Something Different