"He who digs a hole for someone else, falls in it himself."
- Dutch proverb

Well, we're more than a week into the last month of the year and 2014 can be safely summarized as a slow, unproductive year to read and review mysteries on this side of the screen – not to mention the steadily increased backlog of new releases. It's great and all to be smack in the middle of the genre's Renaissance Era, but the pace is nearly impossible to keep up with at this point.

Oh, well, enough complaining for one paragraph and let's take down one of these new releases, before the end of the year. That'll cut one book from my backlog for 2015. Yay, progress! 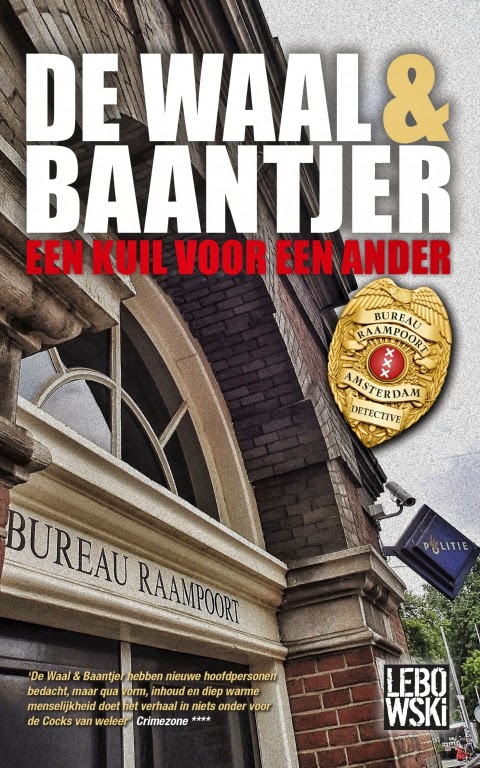 Een kuil voor een ander (A Hole for Someone Else, 2014) is the eleventh entry in the Bureau Raampoort series by Simon de Waal and the late A.C. Baantjer, who co-created/wrote the series until he passed away in 2010. I have said before how Bureau Raampoort has become my placebo for Baantjer's original politieromans about Inspector DeKok, as he's known in the English translations, which were my gateway into detective stories, but this series tends to be more Simenonean than Baantjer ever was – i.e. stories about detectives rather than detective stories. Een licht in de duisternis (A Light in the Darkness, 2012) was a notable exception to this rule and A Hole for Someone Else can compete with it.

Winter has come to Amsterdam and Peter van Opperdoes, the old, seasoned veteran policeman of Bureau Raampoort, is enjoying what would've been his day off, observing futile attempts of car drivers at mounting a slippery bridge, but the discovery of a body puts an end to that day. A construction worker noticed a peculiar hole in a wall, inside a building that was being renovated, and inside that hole was another hole dug in the ground – containing the body of a man with strangulations marks around his throat. But the hole in the wall has more secrets to reveal: there's a hidden door giving entrance to a hidden room, stairs and the house above, which, according to rumors, have been used as a passage way for criminals. The crime scene was basically a Matryoshka doll.

The hidden cubbyhole for criminals in combination with the wintry landscape gave a charming and classical touch to the familiar elements of the series and characters. Van Opperdoes is reprimanded for having closed the open, starring eyes of the victim, out of old-school piety for the dead, before the forensic team could do their work or the scene of three Amsterdam detectives digging in the half-frozen grounds in the provinces for a second body. De Waal also acknowledged Jacob never uses his surname and Van Opperdoes still talks with the disembodied voice of his late wife, which seems to become dimmer with each passing book. The plot itself is pleasantly busy and moves along multiple lines, which includes the double identity of the first victim, an unknown man who fled from the crime scene, a big criminal from the province of Brabant, a corrupt policewoman, a shady Officer van Justitie (prosecutor) and a third body drenched in bullets. There are even a few clues, but, in the end, it still wasn't, what you'd call, a proper whodunit. However, I did appreciate how the unburied body in the wall, and how the body ended up there, brought everything else to the surface. Gotta appreciate those plot patterns.

In summation: A Hole for Someone Else is a fine, bustling police procedural in the Dutch (Amsterdam) style with all the familiar earmarks of an ongoing series that continues to draw readers back to tag along on a case with Van Opperdoes, Jacob and the cast of semi-regulars hovering in-and out of the stories.

Finally, last Wednesday, SBS6 broadcasted the first of a two-part episode of Bureau Raampoort, written by Simon de Waal (of course!), and it appears that the first (?) adaptation merged several books into a new story. The actors will probably take some time getting used to, because I imagine Van Opperdoes and Jacob as Baantjer and De Waal, but I'm looking forward to part two. Here's the promo, if anyone's interested:

I'll probably return to the classics and writing good reviews in my next post.
Geplaatst door TomCat on 12/09/2014