"Either there was no motive at all like in those crazy kind of murders that you read about in the newspaper. Or there was a very good motive, one that makes terrific sense. And that's what keeps going around in my mind--motive."
- Lt. Columbo (Make Me a Perfect Murder, 1978)

I've noticed something inexplicable about the reviews I tagged over the years with the "Foreign Mysteries" label in that, logically, only the blog posts reviewing Dutch-language detective stories should've escaped being labeled as such, but they're categorized as foreign mysteries as well! I seem to have tagged everything that wasn't written and published in England or the United States as being from abroad. Hobby deformation, it seriously alters the mind.

Well, there's no ambiguity on whether or not the label belongs on the work of Keigo Higashino, who made his debut with a Western reading audience in 2011 with a translation of the award-winning Yogisha X no kenshin (The Devotion of Suspect X, 2005), which got a positive reception. The success was followed up with a translation of Seijo no kyusai (Salvation of a Saint, 2008) in 2012 and an English edition of Akui (Malice, 1996) was released this year. 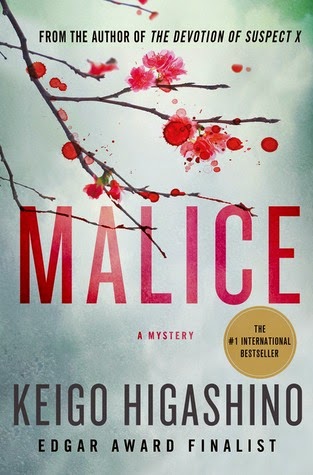 I wanted to read Salvation of a Saint before Malice, but the synopsis of the later captured my attention: "...body is found in his office, a locked room, within his locked house, by his wife and best friend, both of whom have rock solid alibis. Or so it seems." Unfortunately, Malice is not an impossible crime story, but therefore not any less ingenious and enjoyable as it toys around with narratives and the readers' expectations – in what even the respectable looking book cover describes as "A Mystery" instead of "A Novel."

The Devotion of Suspect X and Salvation of a Saint both featured, by now, Keigo Higashino's best known series character, a professor of physics with the nickname "Detective Galileo," but Malice is from the much older Police Detective Kaga series – which began with the for now untranslated Sutsogyo (Graduation, 1986). Malice is split up in "notes" and "accounts," from Kyoichiro Kaga and Osamu Nonoguchi, regarding the violent death of a popular novelist, Kunihiko Hidaka.

Hidaka recently remarried, after being widowed, with the much younger Rie and they're about to move to Vancouver, Canada, but on the evening before their departure, while working on the conclusion of his latest story, Hidaka is murdered in his home office – rendered indefensible with a paperweight and finished off with a phone cord. The front door and door to the office were locked, however, there was an unfastened window. So, yeah, it's not a locked room mystery. Moving on: Hidaka was discovered by Rie and Nonoguichi, who was best friends with the deceased, writer of children's fiction and a former colleague of Kaga. They were briefly teachers at the same high school, before Kaga left to become a policeman and Nonoguichi began a career as a writer. The events leading up to the murder, its discovery and the meeting with Kaga were recorded by Nonoguichi, but the next chapter gives Kaga's view of the events and it puts Nonoguichi's account in a completely different light.

It's the second chapter where the fun of Malice really begins, because Kaga has grabbed the tail end of the truth, while the lion's share of it remains elusive, but, for an inverted whydunit, the story was grounded in the proper detective work of a whodunit. Essentially, Detective Kaga and Nonoguichi are locked in a cat-and-mouse game, but the narratives were meticulous picked apart by demolishing an alibi, correctly interpreting the meaning of a bright computer screen in a dark room, a single cigarette butt in the ashtray of a chain smoker and a stack of handwritten, spiral-bound manuscripts – among other such clues.

I was (somehow) reminded (perhaps by the sober policework) of a short story, entitled "The Shoe," by Chinese Golden Age mystery writer Cheng Xiaoqing, collected in Sherlock in Shanghai: Stories of Crime and Detection (2006), but with the same effect of indecisiveness on the reader as Paul Halter created in La Septième Hypothèse (The Seventh Hypothesis, 1991) by pitting two narratives against each other. What I really appreciated is how Higashino, effortlessly, can present his stories as modern crime novels with a classic bend, without compromising either, as well as exploring the new avenues offered to good plotters by modern science and technology. The Devotion of Suspect X is a particular good counter argument against the slanderous claim that contemporary police work killed the necessity for clever plots (Pfui!). What's more, I think Malice is one of a handful of whydunits I actually like. The only other I can think of is De dertien katten (The Thirteen Cats, 1963) by A.C. Baantjer. So, yes, I enjoyed Malice.

What's even more amazing is that I read a Japanese mystery novel that Ho-Ling hasn't already read in Japanese. That means we're catching up, right?