The Sealed Room: A Literal Stronghold

"The lofty ceiling is not high enough,
The walls contain no consummated breath;
And hanging there, the orison of time.
Ticks and ticks and ticks its way to death."
- Hospital Waiting Room (Sister Mary Vista, R.S.M.)

The marginalizing of the detective story has been a recurring subject of discussion and banter on the GADetection Group, which probably began (again) when a gritty, "ultra-modern" private-eye novel, Where the Dead Men Go (2013) by Liam Mcllvanney, with a jaded protagonist won the Ngaio Marsh Award for Best Crime Novel. 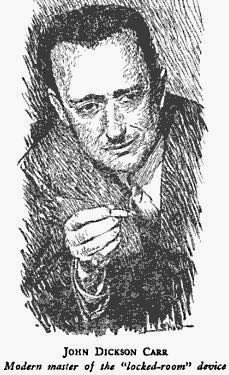 We could literarily feel the foundation of the genre tremble and transcend beneath our feet as we read about the winner's prose-powered, page turning storytelling powers and the books uncanny ability to linger in the mind beyond the final page. It sounded exactly like the kind of bleak, dime-a-dozen, Serious Grime (sic) novels that have come and gone for decades, but critics and scholars have always been favorably disposed to them for "Transcending the Genre" with character-driven narratives – while ignoring such tripe as sound plots and props (i.e. locked rooms and dying messages).

The mystery-sphere's correspondent in France, Xavier Lechard, noted in this ongoing, scattered discussion that as far as the really important "mystery" awards are concerned, "not only traditional mysteries need no apply, but standard crime fiction don't either," favoring novels only marginally affiliated to the genre. 'Cause genre fiction, any type of genre fiction, can be fun-inducing and having fun is dangerously irresponsible – even if it's just from an armchair. Personally, I find it hilarious how the "Respectable Wing" of the genre are distancing themselves from the label "genre fiction" and enclosing themselves in their padded hugbox. I wouldn't have dragged the discussion on to the blog, but I happened to stumble across an old essay from decades ago, more or less, addressing this issue from the perspective of the much maligned locked room sub-genre. The author had written down, what I thought, better than I ever could. I'm a hack reviewer, you see.

"The Locked Room: An Ancient Device of the Story-Teller, but Not Dead Yet" by Donald A. Yates, Professor of Spanish-American Literature and book collector, was published in the 1956 autumn issue of The Michigan Alumnus Quarterly Review and begins with outlining the critique leveled at literature in general at the time – which boiled down to the "classical concept of structure" and "form-for-the-sake-of-form." Obviously, the detective story (and the locked room prop) is guilty as judged, but, as Yates points out, it's a form of literature that actually thrives on those limitations. It has thrived and proven to be fertile grounds for creative writing for over a century, but has often, unsuccessfully, been declared dead and buried. 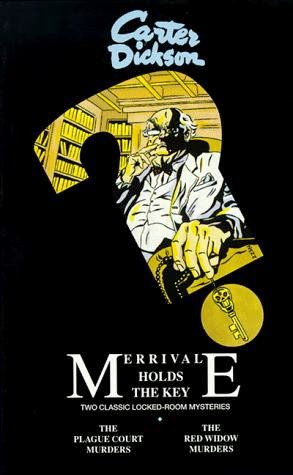 Yates' response to the critics, scholars and contemporary crime novelists eagerly signing their name on the death certificate of the detective story should be committed to memory, "I should like to show that even when its death papers are signed and delivered, a genre is capable of lively revolt" and "that it may throw these papers up in server's face and suddenly reveal that it has acquired a new life and new direction—merely through the stimulation of imagination lent to it by a new individual who has dedicated himself to a fresh treatment of its themes and traditions," because it has happened since this piece was written. Many times!

Herbert Resnicow brought four decades of experience in engineering and construction to the game in the 1980s, which is reflected in the unique way Resnicow approached the problem of the sealed room (e.g. The Gold Deadline, 1984 and The Dead Room, 1987). The neo-orthodox movement in Japan has pioneered, what could be called, "Corpse Puzzles," in which writers fool around with dismembered body parts to create identity problems, alibis and seemingly impossible crimes (e.g. Soji Shimada's The Tokyo Zodiac Murders, 1981). Just two examples.

It continues with a (spoiler laden!) historical overview of the locked room device, from Edgar Allan Poe, Melville Davisson Post and Sir Arthur Conan Doyle to Gaston Leroux, Ellery Queen and John Dickson Carr, which covers the middle portion of the essay, before, prophetically, speculating on its future. Yates states that "the limitations of the locked-room puzzle offer to such writers a challenge which is really rather difficult to resist" and "it seems that in hand of every new advance in the field of human knowledge there comes a new way to polish off someone inside that wonderfully appealing locked room." After all, "Poe had no vacuum cleaner, and we have no penetrating death-ray gun, but it might be next." Last year, M.P.O. Books published Een afgesloten huis (A Sealed House, 2013), in which crime-scene hermitically locked, fortress-like villa guarded with cameras and motion-sensory detectors, but Books found a way for his murderer to by pass those security measures. And the penetrating death-ray gun... I remember a relatively obscure story (from the 2000s) that had the murderer ignite an incendiary device inside a locked apartment with the assistance of a simple laser pen.

I’ll be citing the last lines of the essay in full for prosperity sakes and to close this rambling post: "No, indeed, the last nail has not yet been driven into the restless coffin of the locked-room tale. On the contrary, its critics probably have had their obituaries interpreted more often as a challenge than as a public notice. So with this toast, I would like to hail the mystery authors of years yet to come who will be rallying to the call—Here's to the second hundred years!"

Hear, hear! And many thanks to Bill Pronzini, Marcia Muller, William DeAndrea, Paul Halter, Louise Penny, M.P.O. Books, P.J. Bergman, Paul Doherty, Richard Forrest, Edward D. Hoch, Martin Méroy, Fredric Neuman, John Sladek, Japan and any other writer who picked up the challenge in the post-GAD era. I'll catch up to you sooner or later!
P.S.: I think the actual truth behind the locked room mystery's refusal to die lies in the soft, muffled thumping coming from the tell-tale heart hidden beneath its floorboards. What else did you expect Edgar Allan Poe put in there when he gave life to the detective story? We got a spare heart from the horror genre and now we're immortal! You can bury us. You can wall us up. You can declare us dead, but, like "The Black Cat," we'll always come back. Always!
Geplaatst door TomCat on 11/02/2014