"Dead people are in heaven, or in hell, and I've never yet seen a murderer come from either direction."
- Inspector DeKok (A.C. Baantjer's DeKok and Murder in Seance, 1981)

The 48th volume in the seemingly inexhaustible Detective Conan series, published as Case Closed in North America, kicks off with a mountain hike for the kids of the Junior Detective League – under the familiar guidance of Doc Agasa. 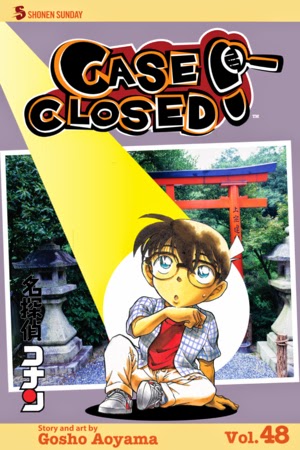 Junior Detective League is there to hunt for beetles, but Doc Agasa and Anita have set out a treasure hunt for them instead. However, the code they've written, as a stand-in for a treasure map, proves to be challenge even for Conan. In between, Conan has to be Jimmy to Rachel over the phone when a guest is bludgeoned to death at her hotel and Serene claims to have seen the victim's "dying message" – erased by the murderer by smashing the window it was scrawled on. Of course, the solution to the code and dying message run along similar lines, but Western readers can forgot about solving these Japanese word puzzles themselves. It probably came off better in the original.

The hotel-murder/dying message seems to have taken its cue from "The Name on the Window," collected in Beware of the Trains (1953), by Edmund Crispin.

The middle section of this volume is entirely gobbled up by The Problem of the Fifth Soul, which would make a great title for a mystery novel. Anyway, Atsuhiro Kunitomo engages Richard Moore, not as a private investigator, but as a ghost hunter – convinced a malevolent spirit is haunting him. A series of strange accidents have happened, on particular dates, post-scripted with the delivery of printed notes signed, "The Fifth Soul." The mansion of Kunitomo is well protected and the entrance to the third floor has a door protected with fingerprint recognition, which only recognizes fingerprints in its system. If an unregistered person touches the pad, it'll be logged as an intruder and the alarms will go off.

Well, you guessed it. Someone is murdered on the third floor and hung from the balcony, but all of the potential suspects with access suffer from a phobia exonerating them from suspicion. I was immediately reminded of Charlotte Armstrong's The Case of the Weird Sisters (1943), but Aoyama wrangled out a different kind of solution that blatantly defied a written rule of the genre – while being completely fair in doing so. The only inexplicable part of the story is that even I don't know whether or not to qualify it as an impossible crime story.

The final two chapters are interconnecting, stand-alone stories introducing a new character, Rena Mizunashi, a TV-News anchor, who brings a small problem to Moore and Conan. Someone keeps ringing her doorbell, but when she opens the door, nobody is there. It's an easy, sickening adorable problem to solve, but a listening device, planted by Conan (just in case), yields unsuspected results in another, ongoing investigation – revealing another member of the mysterious Black Organization. And what he learns is that they're planning to assassinate a person they refer to as "DJ." That story will be concluded in the following volume, which is on the top of the pile.

So, all in all, volume 48 was a decent collection of cases, but none of them particular outstanding (compared to the best in the series) and (probably) the best story will be concluded in the next volume. Luckily, that one is on the top of the pile!

By the way, I felt like channeling the ghost of Frederic Dannay when I came up with the post-title, "Debugging a Ghost," because it covers all of the stories. The bugs from the beetle hunt, debunking of a ghost and the bugging device exposing an agent of a phantom-like organization.