"You have a dead body in a locked room, locked from the inside perhaps, and the question is how on earth could they be in that position with no one else available to have committed the crime. That's it, really, in a nutshell."
- Robert Adey (Miles Jupp in a Locked Room, BBC Radio 4, May 21, 2012)

Only a few day ago, I posted a review of a short story by Herbert Resnicow, "The Christmas Bear," in which I linked to a list of locked room stories and this gave me the idea to compile an inventory of all the locked room lists posted across the internet – a list of lists. I know what you're thinking: this sounds like the blog-post equivalent of a landfill (i.e. filler-post). You'd be absolutely correct!

Well, I guess I'll start filling up this post with the lists that can be found on this very blog, which is a bit self-serving, but it's a convenient starting point. 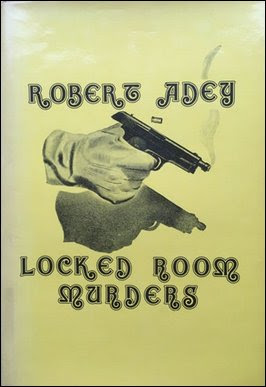 There's an additional list I put together, "Dutch Impossible Crime Novels," but that one can be found on the Golden Age of Detection Wiki, which has several overviews of non-English detective stories – including "Japanese Impossible Crime Novels." A number of locked room authors are also mentioned in the articles discussing "French Golden Age" and "Portuguese Golden Age." On the page "What Not To Do—A Guide for Murderers," the advice is given to aspiring murderers to "wait in a dark alley with a big stick" instead of going through all of the trouble of creating a risky locked room trick (e.g. John Russell Fearn's The Crimson Rambler, 1946).

The next entry on this list is "A Locked Room Library," strung together by John Pugmire of Locked Room International, which covers three different lists: a top 15 of locked room novels selected by a group of mystery writers and critics in 1981 – a group that included Robert Adey, Douglas G. Greene, Edward D. Hoch, William Link, Bill Pronzini and Donald A. Yates, et al. The second half of the list, "99 Novels for a Locked Room Library," was put together in 2007 by an alliance of English-and French speaking locked room enthusiasts and the project was headed by a French anthologist, Roland Lacourbe. Finally, there are fourteen additional titles added to the bottom of the list, which received four or more votes, but were not available in French. So they did not make the final cut.

The Thrilling Detective Website is the home of aficionados of the hardboiled gumshoe, but one of their pages, "And Throw Away the Key: Locked Room P.I. Mysteries," gives ten examples of seemingly impossible crimes occurring on those mean streets of Sam Spade and Philip Marlowe. Surprisingly, the Thackery Phin novels by John Sladek are mentioned, but they got publications dates for Black Aura (1974) and Invisible Green (1977) completely wrong. I also think the list could be appended with Anthony Boucher's The Case of the Solid Key (1941), Manly Wade Wellman's Find My Killer (1947), Bill S. Ballinger's The Body Beautiful (1949), Mack Reynolds' The Case of the Little Green Men (1951) and Roy Huggins' 77 Sunset Strip (1959).

I found the following list only recently, "IMBb: Locked Room Mysteries + Impossible Crimes," which is an enticing accumulation of movies and TV-series that played around with the locked room ploy. Obviously, this area of impossible crimes I have to take a closer look at. Literally! So I might give a movie like Grief Street (1931) or The Verdict (1946) a shot one of these days.

TV Tropes has a page dedicated to the "Locked Room Mystery" and is notable for some of unusual examples it found from a wide variety of mediums, which include anime, video games and even tabletop games.

I previously mentioned John Pugmire of Locked Room International and on his website, under 'Articles," there's a wealth of engrossing and genre-related material – such as "The Top 50 Locked Room Mysteries" (PDF) by Jonathan Scott and "Ten French Impossible Crime Stories Available in English" (DOC). And much, much more.

Hal White is a modern practitioner of the miracle crime and created a contemporary version of Father Brown, whose cases are chronicled in The Mysteries of Reverend Dean (2008), but you can find a wide selection of "Suggested Reading & Viewing" on his website – alongside a long page of interesting links. Oh, look, my blog is on it!

Back in 2014, an Irish crime writer, named Adrian McKinty, received some press when several websites published his "10 Favorite Locked Room Mysteries," which had some interesting and unusual picks. My fellow blogger, Les Blatt from Classic Mysteries, published his "Favorite Locked Door Mysteries" on Flash Light Worthy Books. Some of the usual suspects make an appearance, but Les also picked Stuart Palmer's The Puzzle of the Pepper Tree (1934) and Glyn Carr's Death on Milestone Buttress (1951). You won't find those two often on any kind of list, but they're great mystery novels (especially Pepper Tree).

You can find a fairly standard list of "Locked Room Mysteries" on GoodReads and the official Wikipedia article has a decent list of English, French and Japanese locked room novels, but not particular noteworthy compared to other lists in this blog-post.

Finally, The Locked Room Mystery website has several interesting list of impossible crime stories and novels, which include "A Locked Room Christmas," "Locked Room Anthologies: Recommended Reading" and "Locked Room 101: An Introduction to the Masters."

I think these were all of the noteworthy locked room lists and impossible crime related articles, but let me know in the comments if I missed one.
Geplaatst door TomCat on 10/21/2016