Down the Garden Path

Over the past fifteen years, a whole flock of once obscure and long-forgotten mystery writers found their way back into print, which introduced a score of names to my list of favorite crime-fiction authors – such as Clyde B. Clason, Stuart Palmer and Kelley Roos. A recent addition to that list is E.R. Punshon.

Punshon has nearly fifty novels to his name and thirty-five of them are detective novels about his series character, Bobby Owen, who walked on the scene as a young police constable (Information Received, 1933) and retired as a Commander of Scotland Yard (Six Were Present, 1956). However, one should not assume Punshon was merely an early pioneer of our modern-day police procedural. Punshon had a fertile imagination and possessed the ornamental writing-style of the early twentieth century, which some condemned as wasted verbiage, but I love how he was able to bring a room to life by pointing out a candlelit duel had once been fought in it – c.f. Ten Star Clues (1941). 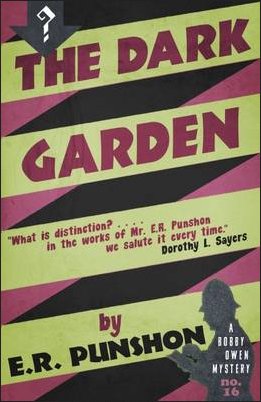 I can appreciate a well conceived sense of time and place as much as a clever and solidly constructed plot, which is another one of Punshon's talent as a mystery novelist. Punshon justly received praise for his labyrinthine-like plots and ability to manipulate multiple plot-threads, like a practiced puppeteer, without his yarns becoming a tangled mess. A veritable artisan of webwork plotting!

So this resulted in over thirty well written, atmospheric and often excellently plotted detective novels that helped "kindly Mr. Punshon," as Anthony Gilbert called him, secure a spot on my list of favorite mystery novelists. A lot of these talents are reflected in the subject of this blog-post.

The Dark Garden (1941) is the sixteenth entry in the Bobby Owen series and one of the earlier books from the Wychshire period, which began (unofficially) in Murder Abroad (1939) and comprises of nine novels in total – constituting his body of wartime crime-fiction. Officially, Owen simply has to double "the parts of head of the not very extensive Wychshire C.I.D." with "that of private secretary to the chief constable," but Colonel Glynne always seemed to be sidelined in these novels. In this case, the chief constable is "recovering from a severe attack of pleurisy." So this leaves Owen in charge of all the big investigations, which occur often enough in this countryside district that it makes you suspect Wychshire County borders Midsomer County. Anyhow...

The story begins with a visit to the office of Bobby Owen by a local farmer, Mr. Osman Ford, who is a grim, dour man with angry eyes and a dark expression. Ford has enthusiastic plans to expand his farm, called Roman Ends, but these plans require funds and there's a sum of five-thousand pounds available, but the money belongs to his wife – which is held in trust on her behalf by a solicitors firm. Mr. Nathaniel Anderson is one of the senior partners in the firm and refuses to discuss the matter with Ford, because the money belongs to his wife, which angered the short-tempered farmer and he's convinced the money has been embezzled. However, Owen advices him to consult a lawyer, but this only angered Ford even more.

Not long after this confrontation, Owen hears that Ford has been airing threats against the lawyer and this is potentially a problem, because there have been persisted rumors that Ford has killed before – a young rival to his wife affection was found dead in an icy canal. Officially, there was "not an atom of proof" for murder and the affair was dismissed as an unfortunate accident, but there was still "lots of talk and gossip."

So Owen decided to give an unofficial warning to the farmer and determined to visit Anderson for further information, but what he finds there resembles a psychiatrist’s waiting room rather than a solicitor's office. Everyone who works there seems to be either obsessed or suffer from some sort of neurosis. 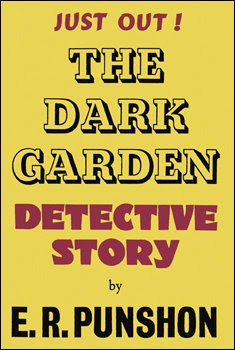 Anderson lives separate from his estranged wife, but has a relationship with one of the office secretaries, Miss Anne Earle, who was a foundling and only recently she was contacted by a long-lost aunt, Mrs. Augusta Jordan. However, Miss Earle's background as an orphan left their marks on her character and these markings drive most of her actions. She also has a much younger admirer among the office employees: a fair-haired, long-legged youth named Billy Dwight. The young man probably saw his employer as an elderly seducer and probably was the person who seen fleeing from Miss Earle's cottage (after being shot at). Arthur Castles is an office clerk, but also the son and grandson of the founders of the office, which the family lost after financial problem and Anderson made sure the boy got an education and a position in the office – which resulted in conflicted feelings within him. On the one hand, Castles is grateful for the opportunities given to him by Anderson, but he always wondered what part he played in the downfall of his father. Finally, there's the second senior partner, George Blythe, who shuns woman and is very passionate about his charity work for Hopewell House, which provides a home for homeless boys who might otherwise have drifted into mischief.

So there you have a glimpse of the intricate web of character-relationships and potential motives, which Owen have to give serious consideration after Anderson goes missing and turns up again halfway through the book – floating in a canal with a bullet hole in his back!

At one point, Owen visits the sickbed of Colonel Glynne to give his report and remarks that whole case "seems to have its roots in the past," because his investigation is littered with references to past happenings: a baby left on a doorstep a quarter of a century ago and bankruptcy from the same period. A wife leaving her husband several years ago. A drowning of a young man who would have been middle-aged today, etc. But there are also several tangible clues: such as an expensive, fur-lined glove that was dumped in the canal and the sum of five-thousand pounds that turns up in several accounts.

All of this can be read as a slow, meticulous crescendo that builds towards a memorable chase scene in the titular garden, in which someone takes shots at Owen with a gun that has a silencer. So he only hears soft pops as bullets whiz past his head. Evidently, Punshon also knew how to write suspense and this becomes even more apparent with the final dénouement over a freshly dug grave. Arguably one of the greatest denouncements of a murderer in all of detective-fiction. A fantastic and atmospheric scene that's only marred by the murderer's identity, which was a bit obvious and anti-climactic, but very forgivable in this instance – since I found the story as whole very good, interesting and somewhat unusual.

It's another example that Golden Age mysteries were not primarily about restoring order. Sure, the case can be shelved as solved, but the final tally is as dark as it depressing. There really are no winners in this book.

So The Dark Garden is not as great as some of Punshon's best work, such as Death Comes to Cambers (1935), Diabolic Candelabra (1942) and There's a Reason for Everything (1945), but still an excellent showcase of his talents as a mystery novelist.

On a final, unrelated note: JJ published the short story collection, Ye Olde Book of Locked Room Conundrums (2016), I conceptualized in this blog-post and the book is a free-of-charge. My next blog-post will (most likely) be about this locked room collection.

So... why are you still here? Why aren't you downloading and reading all of those free locked room stories? Go! Shoo-shoo!
Geplaatst door TomCat on 10/29/2016