"A minute examination of the circumstances served only to make the case more complex."
- Dr. John H. Watson (Sir Arthur Conan Doyle's "The Adventure of the Empty House," from The Return of Sherlock Holmes, 1903)

John Russell Fearn was primarily an author of science-fiction and helped fill the popular magazines of his days, which included Amazing Stories, Astounding Stories and Thrilling Wonder Stories, but had to adopt a number of pennames to toil in the field of crime-fiction – such as "John Slate" and "Hugo Blayn." 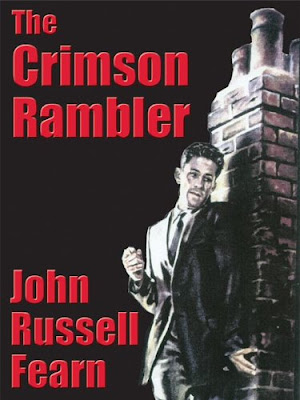 A Toronto-based magazine, named Star Weekly, was one of the periodicals that printed his detective stories and his first (short) novel for the publication, Within That Room! (1946), was a locked room mystery! It was published under his own name, but Fearn experienced some success in the same magazine with one of his science-fiction series, "The Golden Amazon," which forced him to switch to pseudonyms for his subsequent detective novels. So the Star Weekly began to publish his mystery novels, such as Shattering Glass (1947) and The Fourth Door (1948), under pennames like "Thornton Ayre" and "Frank Russell." One of these enigmatically titled detective novels has always intrigued me.

The Crimson Rambler (1947) has been described as being "written in the vein of John Dickson Carr" and how "no discerning collector of locked room and impossible crime stories" can't afford to miss out on it, which worked like a dog whistle on me – drawing me to it with a lure that I can't ignore. So here we are!

The enigmatic book-title is the nickname of the main-character, Chief Inspector Douglas Gossage of Scotland Yard, whose brick-red complexion, "an efflorescence which wandered unchecked far beyond the normal confines to the roots of his close-cropped grey hair and the back of his neck," earned him the colorful moniker. Gossage apparently has a reputation at the Yard for cracking tough cases, because the book opens on a gloomy November morning in his office with a visit from a reluctant colleague.

Divisional Inspector Craddock is faced with an inexplicable murder case at Darnworth Manor, "a big, rambling place some hundreds of years old," where the owner, Werner Darnworth, was shot through the head inside his private study – which seems pretty straightforward and uncomplicated. But the door was locked from the inside and the key was still in the lock. It had to be wriggled out "on to a piece of newspaper under the door" and the sole window in the room was of "the non-opening variety." A solid frame of mullioned panes. On top of that, the divisional surgeon extracted a pellet from an air rifle from the victim's skull. A large and cumbersome weapon for an indoors killing! 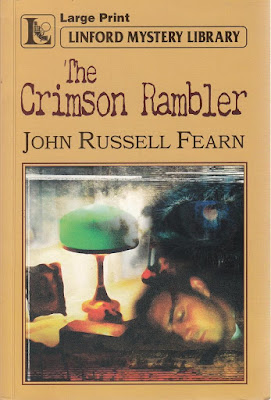 After unceremoniously dumping Craddock ("I don't want you, or the local inspector, or even the Angel Gabriel"), the Chief Inspector takes his right-hand man, Sergeant Harry Blair, to the scene of the crime. There they are confronted with a fairly typical pool of suspects: the wife of the victim, Mrs. Jessica Darnworth, who’s an invalid and blamed her husband for the accident that bound her to a wheelchair. She relies on her companion-help, Louise. Sheila Darnworth is the youngest daughter and an aspiring mystery novelist, but, at the time of the shooting, she was heard playing the piano in the music room. Elaine Darnworth is the second and eldest child of the couple, who assists the local vet, but she away from home at the time her father was shot. Or so she claims. Both of the girls have a fiancé: Sheila is engaged to a radio engineer, Barry Crespin, who was sound asleep after a hard day of work when the deadly shot was fired. Elaine is engaged to Gregory Bride, a scientist and inventor, who received financial backing from his future father-in-law and was staying for the weekend at the manor house. Finally, there's the handyman-chauffeur, Preston. And he shows at one point in the story that he's fiercely loyal to Mrs. Darnworth.

The interaction between Gossage and the Darnworth clan, as he probes for potential motives and opportunities, makes for a pretty standard detective story, which swayed from clichéd (the part about to the wheelchair) to somewhat original (how the malicious will was handled), but the best and strongest part of the plot was the reconstruction of the seemingly impossible murder – which can only be described as a murderer's triathlon. It's an extremely complex scheme and the culprit made murder look like an Olympic sport.

First of all, there's a very understated alibi and the idea behind it was nice, but perhaps belonged on the pages of a parody of the detective story. The crux of the trick is a bit silly for serious and technical locked room mystery. Secondly, the murderer had to gain access to a certain spot in (or around) the home, which was properly foreshadowed. You only need to remember a certain thing by the time Gossage and Blair begin to examine this part of the murderer's plan. The third step is the locked room trick itself, but even with the given explanation the impossible shot still seems, well, impossible. Sure, the murderer made careful calculations and "trial shots," but it was still a blind shot in the dark. On paper, it's a novel locked room idea. But you never get that lucky outside of the printed page. Lastly, there's the disposal of the air rifle, which I actually liked slightly more than the locked room trick itself. It fitted snugly in with the rest of the webwork plot.

So, all in all, The Crimson Rambler is definitely a second-tier locked room novel, but one that shows a measure of ingenuity and has some fun detective work. Yes, the trick is perhaps overly complex and stretches credulity, here and there, but a good read if you love detective stories with a strong how-dun-it element (e.g. Miles Burton's Death in the Tunnel, 1936).

Well, that's another locked room novel I can scratch off the list. Only a few thousand of those wretched things left to go!
Geplaatst door TomCat on 10/20/2016