Secret of the Moai

"All of us love the game called mystery fiction and we're gathered on an island with a bloody back story."
- Poe (Yukito Ayatsuji's The Decagon House Murders, 1987)

During the Summer of 2015, John Pugmire of Locked Room International published an English edition of Jakkakukan no satsujin (The Decagon House Murders, 1987), translated by our very own Ho-Ling Wong, which was a landmark mystery novel in Japan by Yukito Ayatsuji – ushering in the era of shin honkaku (i.e. their golden period). This neo-orthodox movement succeeded the social school, known for emphasizing "natural realism," which had dominated the scene since the 1950s. A dominance that was finally broken in the 1980s with the publication of a handful of plot-oriented mysteries that helped turn the tide against the social menace of so-called respectable crime-fiction. 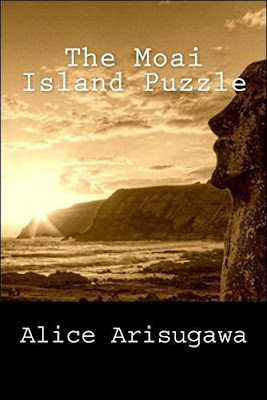 One of these watershed publications was Senseijutsu satsujinjiken (The Tokyo Zodiac Murders, 1981) by Soji Shimada, which even managed to carve out a reputation for itself here in the West. However, that famous and bloody tour-de-force is not the subject of this blog-post. I only mentioned Shimada, "the doyen of the Japanese form of Golden Age detective fiction," because he wrote an insightful introduction for the latest translation by Ho-Ling and LRI.

Alice Arisugawa wandered on the scene with "one clearly defined ambition," which was to become "the successor to Ellery Queen." It's a lofty goal, to be sure, but his first shot at writing a detective story, Gekko Gemu (Moonlight Game, 1988), failed to convince Ayatsuji the new EQ had emerged in Japan – which, however, changed when Arisugawa wrote his second novel, Koto Pazuru (The Moai Island Puzzle, 1989). And that's the one that was peddled across the language barrier by LRI.

If you want to know more about the background of Arisugawa or his work, I recommend you read Ho-Ling's blog-post about the series, "Rebuild: The Student Alice Series," or simply check out all of the posts he made under the "Alice Arisugawa" tag. So now we got that out of the way, let's get this long overdue review on the road.

A law student, named Alice Arisugawa, who, in spite of his feminine name, is actually a guy, narrates The Moai Island Puzzle. I'm not entirely sure why the name of Alice was chosen as both a nom-de-plume and as a name for the character, but I imagine the reason is somewhat similar as to why the protagonist from Eoin Colfer's work, Artemis Fowl, shares his name with a Greek goddess – i.e. sounds kind of nifty (?).

In any case, Alice is a member of the Eito University Mystery Club and a recent addition to the club, Maria Arima, invites him and the club president, Jiro Egami, to an island villa that used to belong to her late grandfather, Tetsunosuke Arima. The place now belongs to her uncle, Ryuichi Arima, but her invitation entails more than just a summer holiday. During his lifetime, Tetsunosuke was a successful businessman and leisure activity of choice was solving all kind of puzzles: jigsaw puzzles, crossword puzzles, mathematical puzzles and mazes. Before he passed away, he created a particular alluring puzzle himself. A treasure hunt he referred to as "an evolving puzzle."

On the small, horseshoe-shaped island, called Kashikijima Island, the old businessman planted twenty-five moai statues. However, these carvings are very different from the ones found on Easter Island. The moai faces on this island were chopped and chiseled out of wood, which are as wide as a telephone-pole and about one meter high, but unlike their stone counterparts, these "wooden moais are all looking in different directions" – which Maria suspects "might be the key to unlocking the secret." One that will reveal where her grandfather has hidden a stash of diamonds. So would the Mystery Club not take up the challenge and solve the mystery?


How difficult can it be? It's only a tiny island with two main buildings: Panorama Villa on the Western Low Tide Cape and Happy Fish Villa on the Eastern High Tide Cape. The former is the holiday residence of the Arima family, while the latter is the retreat of a small-time artist, Itaru Hirakawa. In addition to these buildings, there's a small arbor and an observation platform tucked away in the lush and wild vegetation of the island. A seemingly peaceful and benign place, but, early on in the story, the reader learns of a tragedy that has taken place there. Maria's cousin, Hideto, attempted to solve the intricate moai puzzle, but tragically drowned at sea. This happened three years ago and pretty much sets the stage to the tragedies that are about to unfold on the isolated island.

The stretch between the prologue and the chapters that lay the groundwork for the first murders take up a significant portion of the first half of the book, which is told in leisurely pace and might test the patience of reader who prefer the introduction of a body at the earliest moment possible. However, this part of the book does an excellent job in sketching an image of the story's surrounding and introducing all of the characters. This all lead up to one of the more curious, but well handled, locked room mysteries I have encountered in a long time. I should remind you that I say that with John Russell Fearn's extraordinary Thy Arm Alone (1947) still fresh in mind.

Somewhere around the 80-page mark, the bodies of two family members are found behind the bolted door of a bedroom: the first one belongs Ryuichi's brother-in-law, Kango Makihara, whose body is covered by that of his daughter, Sumako. The murderer shot both father and daughter with a rifle that was kept illegally on the island for target practice. However, the rifle was not found when they broke into the bedroom. So how did the shooter manage to leave two bodies inside a sealed bedroom with a stiff, rusty latch on the door?

On the back cover, the impossible situation is described as "brilliant and worthy of John Dickson Carr." Personally, I would not draw a comparison between this locked room and those conjured up by the Grand Master himself, because the explanation offered by Arisugawa took a deconstructionist's approach. That being said, this still has to be one of the most solidly motivated locked room murders in all of detective fiction. There was a good and original reason as to why the room had to be locked from the inside. I remember Sir Henry Merrivale lectured in Carter Dickson's The White Priory Murders (1934) and The Peacock Feather Murders (1937) about all of the motives for creating a locked room scenario, but this one was not mentioned. So The Moai Island Puzzle might have actually broken new ground in the genre. No mean feat!

This is not the only puzzle facing Alice, Maria and Egami: a third murder is committed on the other side of the island, which seemed to have involved a dying message, but it turned out that the murderer obliterated this tell-tale clue – which is a real pity. I'm always surprised at how few genuine dying message novels there really are. Ellery Queen's The Tragedy of X (1937) is seen as an iconic example of this ploy, but really, the dying message is only a minor part of the overall plot. One that was not introduced until the novel was nearing its final chapter. So the only real example I can think of is Murder Points a Finger (1953) by David Alexander. Anyway...

A final problem is presented in the guise of a supposed suicide: the alleged killer shoots himself and leaves a suicide note behind, but this incident is swiftly revealed to have been staged. However, where the story really excelled, as an exercise in deductive reasoning, is the impressive chain of deduction and how all of the aspects of the plot seemed to come together naturally – beautifully dovetailing into a cohesive pattern. Egami is able to reconstruct the murderers movement, during the third murder, based largely around a tire-mark on a piece of piece (a map of the island) that was found along the road between the two villas. It effectively demonstrated how serious Arisugawa was when he said he was going to pick up the mantle of Ellery Queen. A message he punctuated by including "A Challenge to the Reader" towards the end of the novel. Lastly, there's how everything fitted together. The Moai Island Puzzle could've easily degenerated into a convoluted mess, but the way in which the events played out gave the plot a glimmer of realism. You could bring yourself to believe events could actually unfold in the way they were described and coherently explained here.

Sadly, I was too slow and thick to have reached the same conclusion. I instinctively guessed (shame!) the murderer's identity, but my deductions were far from stellar. Not my finest hour as a conceited armchair detective who sees himself as being on par with Mycroft Holmes. Oh well!

So what else can I say in this overlong review except that, based on this novel, Arisugawa seems worthy to ascend to the throne of Ellery Queen. Hopefully, we've not seen the last of him on this side of our beloved genre.

On a final, semi-related note: some of the long-time readers of this blog know, when I began blogging, I shamelessly copied Ho-Ling's blog. I use blog-titles and opening quotes that are only vaguely related to the blog-post, which annoyed or confused some readers. But there's no way back now. Anyhow, Ho-Ling is fond of using episode titles from Scooby-Doo for his blog-posts. So for this blog-post, reviewing a book he translated, I decided to look for an applicable Scoody-Doo title, but without much success. Luckily, there was another Hanna-Barbera produced cartoon show, The Real Adventures of Jonny Quest, which had a perfect episode title for this blog-post. So hopefully JQ can also carry his approval.
Geplaatst door TomCat on 10/06/2016