The Jewel That Was Ours

"And that means murder..."
- Miles Bredon (Ronald A. Knox's "Solved by Inspection," collected in The Oxford Book of English Detective Stories, 1990)

During her lifetime, Winifred Peck (née Knox) gained critical and popular recognition as an author of mainstream fiction and biographical literature, which began with the publication of The Court of a Saint (1909), when she was 27, followed by twenty-five novels and memoirs over the next four decades – including a pair of long-forgotten mystery novels. But some of her equally talented relatives always seem to cast a shadow over her accomplishments. 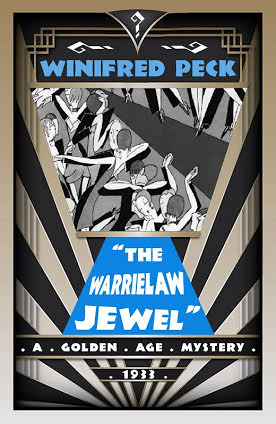 One of these relatives was her younger brother, Ronald A. Knox, who was a founding member of the London-based Detection Club and concocted the Detective's Decalogue: The Ten Rules of Detective Fiction. Reportedly, Knox also authored some excellent detective stories, such as the much-touted Still Dead (1934), but I’ve only read one of his short stories, the Chestertonian "Solved by Inspection." However, I was aware of Knox and the legacy he had left behind, but I think most of us were oblivious of his sister and her brief participation in the Grandest Game in the World – which changed for me when Curt Evans wrote a 2012 blog-post, "Murder in the Family," about her first mystery novel.

It was (sort of) a repost of an article that had been previously published on Mystery*File, but it was on Evans' blog that I first learned about Peck.

In any case, The Warrielaw Jewel (1933) impressed me as a potentially interesting detective story, which can be counted as one of the earliest examples of a historical mystery. During the Golden Age, the historical detective story were not the rage it is today. So I was very curious about that aspect of the story. I was not as thrilled about the comparison with Margery Allingham or how the book supposedly presaged the "shifting of emphasis from pure puzzles to the study of character and setting," which "helped mark that gradual transition from detective story to crime novel," but I was left intrigued nonetheless – sharing Evans' hope that the book would, one day, be republished. Well, that day is finally upon us!

Dean Street Press is reissuing The Warrielaw Jewel and Arrest the Bishop? (1949), which are prefaced by award-winning crime novelist and anthologist, Martin Edwards, who reviewed the book back in 2011. At the time, Edwards' called the plot and prose well constructed, but ponderous and lacking excitement. These are valid points of criticism. However, I was not bothered by the leisurely pace of the storytelling or the strong emphasis on characterization, because the overall structure of the story was pretty solid. Peck essentially penned the kind of character-driven detective story that Ellery Queen attempted to create in Calamity Town (1942), but Peck actually succeeded were Queen failed. On top of that, Peck even included a "Challenge to the Reader" at the end of the twelfth chapter. But I'm getting ahead of the story here. 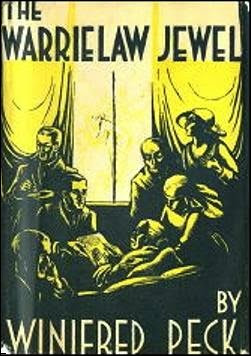 The Warrielaw Jewel is narrated by Betty Morrison, who relates the details of a murder case she was involved twenty years previously, when she had just married her husband, John Morrison, who's an attorney to an old, eccentric and moldering Edinburgh family – the Warrielaws. The events of Betty's narrative took place in 1909, "when King Edward VII lived" and "the term Victorian was not yet a reproach," which began to move after she and her husband moved into the house that was vacated by his parents.

In those days, Edinburgh was not a city, but "a fortuitous collection of clans" and beneath the surface "lurked a history of old hatreds" and "feuds as old as the Black Douglas." Betty is about to discover this first-hand when she comes into contact with the Warrielaw. One of the favorite economy of her husband's clients is saving six shillings and eight pence by extracting legal advice from him in an ordinary social setting, which is why he find several members of the family on his doorstep: Miss Mary Warrielaw and Miss Rhoda MacPherson. Officially, they wanted John's advice about a burglary at the home, but Mary also hints about the ill will towards her sister, Jessica, who is sort of the matriarch of the family and she has been slowly selling off the family jewels, pictures and antique furniture.

She was taken to the court over this by a cousin, Cora Murray, but the law decided in Jessica favors. So she has continued liquidating family assets ever since. But now she wants to get rid of the last family heirloom, the fairy jewel!

According to the family legend, the only known fairy relic in the world came into their possession during the reign of James II of Scotland. One night, the dark lair of their clan strayed out into his dark woods and there he encountered a genuine fairy – a small, fair and glittering lady. He took the fairy to his castle and married here there. As a dowry, she gave him a jewel, taken from "the dim caverns of elf lands," but there's an interesting aspect about this legend that was not acknowledged. The family legend states that the fairy, a dutiful wife, bore the lord of the manor ten children and they were all bequeathed with "her fair hair and gold-green eyes." It is noted how strange these gold-green eyes are, because, besides the peculiar color, they also have small pupil that rarely contract or expend. These eyes are the most defining trait of all the Warrielaws. I can imagine the early Warrielaws dreamed up this fairy tale to explain the mutation in their bloodline, which made them standout from the other dark Borderers of the 15th century.

Anyway, the first half of the book lay the groundwork for the second half and takes the time to introduce all of the characters, which also includes other relatives such as Neil Logan, "a queer fish," who's an artist and one of the few family members who profited from Jessica. Alison is Rhoda's younger stepsister and she's getting involved with Betty's brother, Dennis. The reader is also shown around the rundown mansion of the family with its rabbit warren of dark corridors, ageless library, overstuffed rooms and large, overgrown garden. This narrative is punctuated with comments from Betty about the changes that have taken place between 1909 and 1933. It equips the book not only with a strong sense of place and time, but also gives off the impression that time is moving all around the characters. Peck succeeded admirably in penning a story that looked back on events from a previous era.

Well, these events really begin to move when Jessica Warrielaw vanishes from the face of the Earth and leave the household without a dime to draw on. She stays gone for seven weeks, but then a gruesome discovery is made in one of the outhouses a stone's-throw from the Warrielaw estate: Jessica's badly decomposed body was found underneath several sacks, battered and stabbed to death, which quickly places her eccentric nephew, Neil, in a precarious position – who benefited under her will and had the means to carry out the murder. So he's charged with the murder of his aunt and hauled in front of a judge.

Luckily, for Neil, a retired policeman and a long-time friend of Betty's husband, Bob Stuart, decided to poke around in the case. And he stumbles to the truth when the sight of what could've been Jessica's ghost startles someone. However, the explanation for the murder is not another variation or imitation of the Birlstone Gambit. It's a surprisingly easy, straightforward and workable explanation, which feels like an inevitability through Peck's excellent characterization and depiction of the various family members.

I should note here that a large chunk of the plot does not necessarily revolve around correctly identifying the murderer or motive, but placing the sequence of events in the correct order. So, plot-wise, this might not have been the most ideal crime novel to have a Queen-ish "Challenge to the Reader" inserted, which belongs between the pages of a thoroughbred whodunit, but you can definitely work towards the solution based on the given information.

All in all, The Warrielaw Jewel placed a great deal of emphasis on characterization and setting, but the end result was a dark, moody and memorable detective story. And, as I said earlier, Peck succeeded in this book where Ellery Queen failed with their character-driven-and psychology driven Wrightsville novels. Well, that really all I've say about this book. It's a really good, engrossing and solid read in spite of the plot taking a backseat in favor of the characters and setting.

I'll try to scratch her second mystery novel from TBR-list before the end of the month, but, for my next blog-post, I'll try find something that’s heavy on plot. Perhaps a locked room mystery or something. I haven't discussed one of those for ages on here, right?
Geplaatst door TomCat on 10/01/2016