"As long as Satan walks the earth, evil walks with him. Even here... someone held hands with the devil..."
- Simon Ark (Edward D. Hoch's "City of Brass," from City of Brass and Other Simon Ark Stories, 1971)

Lately, the Dean Street Press began resurrecting the literary legacy of Winifred Peck, which began with one of her mainstream works, Bewildering Cares (1940), together with both of her detective novels and I reviewed one of them earlier this month – a splendidly imagined mystery entitled The Warrielaw Jewel (1933). I alluded in that review to Peck's famous relatives and singled out her younger brother, Ronald A. Knox, who penned several highly regarded mystery novels. Knox was also a Catholic priest and a theologian of some renown, but he was not the only family member who served the church. 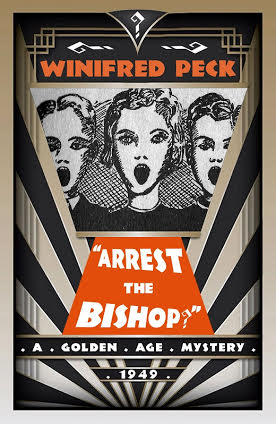 The father of Winifred and her five siblings, one sister and four brothers, was the Right Reverend Edmund A. Knox, fourth Bishop of Manchester, while another one of her brothers, Wilfred Knox, "earned distinction as an Anglican clergyman and theologian" – which likely resulted in a discussion or two between her Protestant and Catholic brothers.

Evidently, Peck drew on her family background when she briefly returned to our beloved genre with her second, and last, mystery novel, which was given the Episcopalian-sounding title of Arrest the Bishop? (1949). The story is set inside the walls of a Bishop's Palace and takes place in anticipation to both Ordination day and Christmas, but the arrival of an unpleasant and scandalous character casts a shadow over the proceedings. However, I should point one or two things before I begin poking the plot.

Peck dedicated Arrest the Bishop? to her husband, Sir James Wallace Peck, who helped her plotting the book and the dedication tells how he "horrified a guest" by announcing at breakfast they were going to make it "a fatal dose of morphia." Or terrified her housekeeper with a note asking to tell "Lady Peck we must have an inquest." This endeared them to me! Secondly, the book, similar to its predecessor, qualifies as a historical mystery, because the story takes place in the then recent past, which is two years after World War I – during a dark, snowy December in the year 1920. So the characters that fought in the trenches of the Western front add an extra layer to the depiction of ecclesiastical life at the Bishop's Palace. On top of that, the book can also be read as a Christmas mystery and all of this makes for an interesting detective story.

The villain of the piece is the wicked Rev. Thomas Ulder: a silver-tongued drunk and a scoundrel whose tenure as the head of the Theological College was dogged by "tales of bad management," financial discrepancies and muttered curses of his name by candidates who passed through the college – followed by "definite tales of drunkenness and dishonesty." He was finally persuaded to retire to a remote village, where the congregation was small and old, but he seems to have spent his time there gathering material.

Thomas Ulder's intention to return to the diocese coincides with the visit of several important guests, namely Canon Wye and Chancellor Chailly, but the Bishop is thoroughly appalled when he learns Ulder "is coming out to see him and his guests." On the eve of ordination, Ulder arrives at the Bishop's Palace, but his health has deteriorated in the intervening years and collapses as soon as he crossed the threshold. They placed Ulder in one of the bedrooms, but someone took advantage of this medical emergency and slipped him a fatal dose of morphine. And this is where the trouble really begins for the poor Bishop.

Initially, it is assumed Ulder took the poison himself, which would be bad enough, but a scrap of paper seems to indicate he had picked up blackmail as a side trade and every name on the list was present at the time of his death – which both strongly suggest murder. But as bad as a suicide or murder at the Bishop's Palace, is the person who'll be in charge of the investigation: Major Mack, the Chief Constable, who is "a violent Dissenter" and "a real enemy of the Church." Someone who sneers at the clerical tendency to sweep every hint of a scandal under the rug. However, I should note here that "the burly Chief Constable" is described as bursting with prejudices, against prelacy, pacifism and (modern) women, but his distaste for foreigners did not extend to the Dutch. So he probably has a point about those white feathers, harlots and fence crawlers. Personally, I found no reason to dislike the Major. He's a good guy!

Funnily enough, the Major, "who is no mere agnostic," is assisted by Dick Marlin, ex-military intelligence and now a Church deacon, who sees himself as a Church Militant. They make for a surprisingly well-matched pair of characters who ought to have had their own series of mystery novels. Sadly, they only appeared in this one-off. A large chunk of their work consists of drawing the past sins from all of the potential blackmail victims, which also involves one of the Bishop's daughter and this convinces the Major at one point that he has the "duty to arrest the Bishop." It was Marlin who convinced him to hold off the arrest for another day.

The introductory chapters, the subsequent investigation and the depiction of (family) life within the walls of the Bishop's Palace makes for an excellent and fascinating story, which came close to being superior to The Warrielaw Jewel, but the solution was prosaic and uninspired – which prevented the book from being a truly noteworthy detective novel. A genuine shame because I assumed, throughout the entire story, that the book was heading to my best-of list for 2016, but the final two or three chapters prevented that. It's really frustrating when you read a mystery that's consistently great and then fails you in the end. Anyway...

So Arrest the Bishop? is really well written and characterized, but as a detective story, the book stumbled and fell with the finish line in sight.
Geplaatst door TomCat on 10/18/2016