"I told you these were shadows of the things that have been... that they are what they are, do not blame me."
- Ghost of Christmas Past (Charles Dickens' A Christmas Carol, 1843)

One of the most remarkable resurgence from obscurity has to be the small-scale renaissance of J. Jefferson Farjeon's fanciful crime-fiction (e.g. Holiday Express, 1935), which can be traced back to a 2012 blog-post from genre historian and critic, Curt Evans – who spoke warmly about Mystery in White (1937). A wondrous and wintry crime novel that became "a festive sleeper hit" when it was reprinted by the British Library in 2014. Everyone was astonished when the book, out of nowhere, sold over 60,000 copies!

So, I'm kind of late with my review of the book, but still well ahead of this years' festive season and you can expect two or three further reviews of Christmas mysteries in the coming months. But first things first! 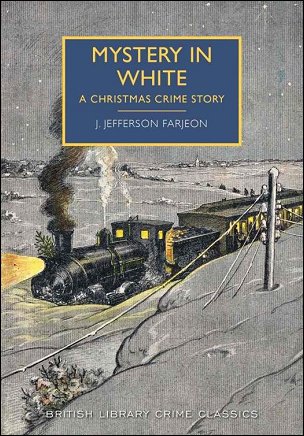 Mystery in White is a rattling yarn of Mitchellian crime and wonder, which embarked on its fantastical journey when the "half a dozen inmates of a third-class compartment on the 11.37 from Euston" found themselves stranded on a snowbound train. The seemingly never-ending snowfall blocked the railway tracks, back and forth, turning the unofficial halt into a permanent one. However, this extreme Christmas Eve blizzard does not worry Mr. Hopkins, "the elderly bore," who experienced a month-long tempest in the Yukon town of Dawson, but he's the only one in the compartment who "pooh-poohed the whole thing as insignificant" – as most of them wished they were somewhere else.

The young woman next to the bore is a beautiful chorus girl, named Jessie Noyes, who is on her way to Manchester for an important audition. Robert Thomson is a tall, pale and unhealthy looking youth, which is "due partly to the atmosphere of the basement office in which he worked," but the clerk also has a rising temperature. David and Lydia are brother and sister en route to a Christmas party, which they probably have to miss due to the complete whiteout outside of their railway compartment.

Finally, there's the fascinating personality of Mr. Edward Maltby, of the Royal Psychical Society, who has an appointment to interview the ghostly residue of Charles I of England – reputedly stored inside the walls of an old house in Naseby. Maltby believes that "the past is ineradicable," stored away, which can be revealed and replayed like a gramophone record. And he proved to be an interesting detective-like character in the tradition of William Hope Hodgson's Carnacki, the Ghost Finder (1910) and John Bell from A Master of Mysteries (1898) by L.T. Meade and Robert Eustace.

Malty is also the one who set the train of events in motion when he out of the compartment, "into the all-embracing snow," in an attempt to reach a different line.

Not long after his departure, Jessie, Robert, David and Lydia decide to follow in the footsteps of the psychic investigator, but Mr. Hopkins, the eternal bore, frowns at the notion of venturing out in the snow. So he stays puts. But "the four adventures" are determined to track across "the motionless white scene" of the "strange fairyland" outside, which is fraught with more dangers than they initially anticipated. Luckily, they manage to survive a renewed blizzard, a small avalanche and a pitfall, but they manage to penetrate "the curtain of whirling white" and the reach the threshold of a lonesome house – where a welcoming log fire is roaring in the hearth, tea has been laid and a kettle of water is boiling. There is, however, one problem: nobody appears to be home! In fact, the place seems to be completely abandoned.

On a quick side note, the lonely house, in combination with the holiday theme, reminded me of Bill Pronzini's "No Room at the Inn," which can be found in the short story collection Carpenter and Quincannon: Professional Detective Services (1998). It makes for an interesting comparison. 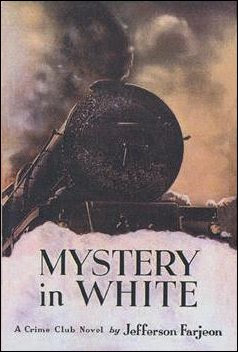 Anyway, the marooned party from the train slowly ease into their role as comfortable trespassers, because having two wounded (or sick) members is as good an excuse as any, but they begin to realize that something is not quite alright – such as noises and sounds coming from behind a locked door of an attic room. A room that is later found to be unlocked and empty! Soon, they find Maltby on the doorstep and a man, who calls himself "Smith," with a Cockney accent and a suspicious act, accompanies him. Smith claims he knows nothing about a snowbound train, but is in the possession of a train ticket.

An obvious lie that might be easily explained by news that’s brought to the stranded party by the half frozen bore, Mr. Hopkins: the body of a man, strangled to death, was found in an adjoining compartment not long after their departure. So is the murderer one of them and is there a possible connection between the murder and the empty house?

I could go on to describe the subsequent events, but, after a quarter or so of the book, it turns into the kind of story you really should read for yourself, because the overall plot is not easily pigeonholed. Mystery in White can hardly be described as a traditional whodunit with a logically constructed plot or a thriller with breathtaking scenes of suspense. The story is far too gentle to be a thriller and the explanation really disqualifies it from being a whodunit. However, the plot does borrow components from these types of stories: Maltby makes a series of deductions based on several items he found in the house and stages an excellent dénouement, in which he brings an old portrait to life to explain a long-forgotten murder that happened there on Christmas Eve of 1917.

There was also a nice touch about "the official version," described in the next to last chapter of the book, in which the reader is told about the police's official, but incorrect, view of the case and its explanation. So you can have a chuckle at their expense.

I really liked these particular scenes, however, they did not make for the sort of detective story that was typical of the 1930s. I labeled the book earlier as a Mitchellian crime fantasy, but I suppose a Poean tale of mystery and imagination would be a better description. One that only allows you to take it one chapter at a time, but even after eighty years, the book still feels like a breath of cold, fresh air in the genre. Something that's genuinely out of the ordinary, strange and original, but can still be enjoyed and appreciated by such fervent classicist as yours truly. I guess the best way to view the book is as our genre’s version of Charles Dickens' A Christmas Carol (1843).

But enough of my blabbering. Mystery in White is a good, likeable and imaginative Christmas tale, which happened to have a criminal element. It's good to know the book not only found its way back into print, but also enjoyed some success. Well, I guess I'll leave it that and try to find something more traditional for the next review. So stay tuned!
Geplaatst door TomCat on 10/15/2016