Back off everyone, they're professionals!

"Detective work, gentleman. That is all I can say."
- John Quincannon 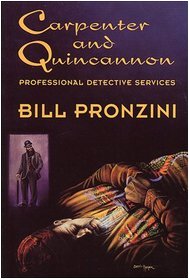